Or should we call it the Prime Phone? Amazon hopes its smartphone will tempt people to ditch Apple and Samsung for dedicated access to Amazon products.
10 More Powerful Facts About Big Data
(Click image for larger view and slideshow.)

Amazon took to the stage in Seattle to talk about its first smartphone. The device is a rather middle-of-the-road piece of hardware, and comes with features that range from genius to gimmicky. The Fire Phone has a 4.7-inch 720p HD screen that Android claims is one of the brightest available for better outdoor viewing and reading. It is powered by a 2.2-GHz quad-core Snapdragon 800 processor from Qualcomm with Adreno 330 graphics and 2 GB of RAM. The phone will be sold in 32-GB and 64-GB varieties.

The Fire Phone includes a 13-megapixel main camera that can shoot 1080p HD video. Amazon is providing unlimited Cloud Drive storage for photos taken with the Fire Phone. The camera has an aperture of f/2.0 for better low-light performance and optical image stabilization for sharper photos. It also has a 2.1-megapixel user-facing camera for selfies. The device is equipped with stereo speakers and Dolby Digital sound. Amazon CEO Jeff Bezos said the company took care in designing and manufacturing the phone to give it a premium feel.

[Is Uncle Sam about to crack down on your map? Read Transportation Dept. Wants To Regulate Smartphone Maps.]

The Fire Phone runs the latest version of Amazon's Fire OS, which is what is found on Amazon's Kindle tablets. Fire OS is based on Android, but is forked -- meaning it doesn't include Google services, such as the Play Store and Gmail. Instead, the OS comes with Amazon's application and content stores. The operating system is where Amazon performed most of the magic to differentiate the Fire Phone from the competition. The things that stand out are Dynamic Perspective, Firefly, MayDay, and Prime.

Dynamic Perspective puts four user-facing cameras to work in defining and tracking the human face. This lets Amazon add a three-dimensional element to many parts of the user interface, such as the lock screen wallpapers. Dynamic Perspective also helps users control on-screen content, such as the pages of an ebook. Amazon is offering a software development kit for Dynamic Perspective to third-party developers so they may take advantage of the technology. The effect is certainly cool, but borders on gimmicky. Apple had problems with the iPhone when it added 3D effects to iOS 7. Some consumers claimed motion sickness. Amazon might run into the same issue. 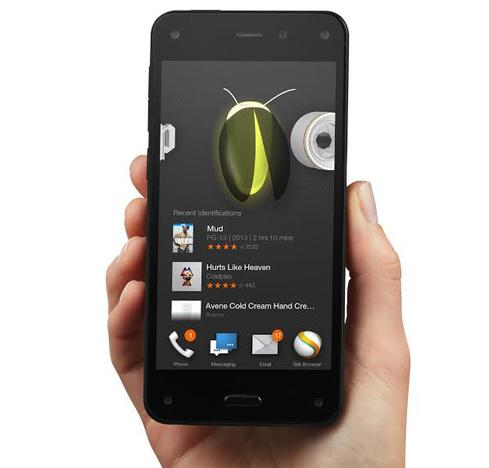 The Fire Phone's Firefly feature, which has its own button on the side of the phone, identifies movies, songs, and products.

Firefly uses the Fire Phone's main camera to recognize objects and text or language. Think of it as a barcode scanner on steroids. Not only can it root out the details of the movie, CD, garden hose, and frying pan you want to buy, it links to the items on Amazon's website if they're being sold there. Firefly is not a new technology, but Amazon appears to have done it better than anyone else. For example, it is lightning quick. It can recognize and link to items far faster than many similar apps and services. Firefly can also be used to recognize music, like the popular Shazam app, or live television shows. Amazon thinks Firefly is so important it gave the app a dedicated button on the side of the phone. Like Dynamic Perspective, Amazon is offering developers an SDK so they may use Amazon's object recognition tools for their own Firefly-based apps.

MayDay is Amazon's popular live assistant service, already available on Kindle tablets. It lets device owners chat with a real customer service representative instantly to help with anything related to the device. Those assistants will be able to change settings, offer suggestions, and help resolve many other issues. Second Screen, another feature, ties into Amazon's Fire TV, and can be used to fling video or audio content (movies, music) from the Fire Phone to the Fire TV streaming media box. Think of it in the same way that Apple uses AirPlay to push content to the Apple TV and how Google uses casting to push content to Chromecast.

Then there's Prime. The Fire Phone was made for Prime subscribers. It provides access to Amazon's entire Instant Video library, as well as the recently-launched Prime Music. The Fire Phone can access Amazon's vast store of ebooks as well, including Amazon's lending library. The device will learn user preferences for content over time, and can even pre-cache movies or TV shows it thinks the owner might want to watch. Prime costs $100 per year, but Amazon is giving Fire Phone owners Prime free for one year.

"The Amazon Phone Fire is an innovative phone with a series of new features. It is always great when a new company enters the market as it provides a fresh look on a true and tried product," said Roger Entner, lead analyst and founder of Recon Analytics. "Through its distribution capabilities Amazon has a significant leg up. The success of the Amazon Kindle Fire is a good benchmark of what Amazon can do... and maybe it can do even better than the Kindle Fire."

The pricing and exclusivity to AT&T might hurt Amazon, but the company is betting Fire Phone will be a success.

What do you think of the price? Tell us in the comments section. Then take our flash poll to cast your vote for the song Amazon should use to promote the Fire.

Sure, Amazon is an easy and convenient way to shop, especially if you're a Prime customer. But I'm not sure that's enough to entice iPhone users and other Android users to switch. This kind of feels like the rumored Facebook phone -- an entire ecosystem designed around one product.
Reply  |  Post Message  |  Messages List  |  Start a Board

If you consider the free year of prime as coming off the price, it basically is $100. The kind of person who will be interested in an Amazon branded phone is also the kind of person for whom spending the $100 on Prime is a forgone conclusion.
Reply  |  Post Message  |  Messages List  |  Start a Board

I also believe Amazon will need some other partner carrriers in addition to AT&T. Nokia selected AT&T as the exclusive carrier for some quarters hoping that AT&T will push the sales through its channels. However, it did not do good for Nokia. There will be many potential customers who would like to buy one but will not get one just because of being non-AT&T subscribers. This phone is not something that will push herds of people to jump to AT&T. Exclusive contracts do have perks but will it outweigh the cost of losing non-AT&T enthusiasts?
Reply  |  Post Message  |  Messages List  |  Start a Board

The Fire Phone is clearly a ploy to rope more shoppers into the Amazon ecosystem. But I wouldn't underestimate the power of the Amazon brand. The phone does have some unique features (Firefly, Prime, Dynamic Perspective) and perks like free Prime for a year. The smartphone market is brutal but it's getting predictable. This is a nice jolt. I am surprised by the high prices given Amazon's proud history of keeping prices down. The AT&T-only service is a head-scratcher too, but I'm sure Amazon will expand quickly if things go well.
Reply  |  Post Message  |  Messages List  |  Start a Board


That's little pricey if you ask me. Keeping it around $100 would have been better I think and being exclusive with AT&T is a mistake, IMO.