In addition to its new convertible Chromebook and numerous smartphones, Acer updated its Aspire notebooks and released a tablet targeted at gamers at the 2015 IFA show in Berlin.

Acer rolled out a slew of products at the IFA consumer electronics show in Berlin on Wednesday, including PCs and notebooks aimed at gamers, six smartphones, a convertible Chromebook, and two Windows 10-powered desktops.

The handsets feature a curved chassis with upgraded front-facing cameras, wide-angle lenses, and enhanced audio and are all aimed at the Europe Middle East and Africa (EMEA) market.

The flagship Z630 boats a 5.5-inch display and a 64-bit, quad-core 1.3GHz MediaTek MT6735 processor. It's also equipped with AcerEXTEND, which connects wirelessly to a compatible laptop or PC and lets users view the phone's home screen in a phone-shaped emulator box on the computer.

Acer's two convertible notebooks include the Aspire R 13 and the R 11, the company's first convertible Chromebook.

The R 13, powered by 6th Generation Intel Core processors, makes use of the company's Ezel Aero Hinge that supports six modes and features a U-frame structure made of die-cast magnesium-alloys.

Available in North America in October for $899, the R 13 also features a built-in Precision Touchpad (PTP) designed to improve the accuracy and performance of touchpad navigation. 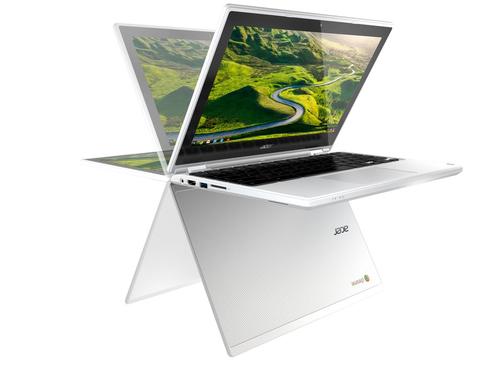 The Chromebook, which will be available in North America in October with prices starting at $299, is powered by Intel Celeron processors. It features an 11.6-inch HD display with integrated 10-point touch and fast 2x2 MIMO 802.11ac wireless connectivity.

Acer also announced refreshes to its Aspire V Nitro Series notebooks and Aspire V 13 notebook, all of which incorporate 6th Generation Intel Core processors. They will ship with Windows 10.

Acer is also targeting notebook gamers with the release of the Predator 15 and 17 models, which feature the 6th Gen Intel Core i7-6700HQ processor, NVIDIA GeForce GTX980 graphics, up to 32GB of DDR4 memory and 512GB2 NVMe PCIe solid state drives.

The tablet, which features 64GB of onboard storage and expansion capabilities via a microSD card of up to 128GB, will be available for $299.99, exclusively at Newegg for two weeks beginning on Nov. 6, and at other retailers following that period.

Other products targeted at gamers include the Predator G6 and G3 desktops and the Predator Z35 monitor, which boasts a huge 35-inch UltraWide FHD panel.

Nathan Eddy is a freelance writer for InformationWeek. He has written for Popular Mechanics, Sales & Marketing Management Magazine, FierceMarkets, and CRN, among others. In 2012 he made his first documentary film, The Absent Column. He currently lives in Berlin. View Full Bio
We welcome your comments on this topic on our social media channels, or [contact us directly] with questions about the site.
Comment  |
Email This  |
Print  |
RSS
More Insights
Webcasts
Architecting Security for the Internet of Things
Defense and Response Against Insider Threats & User Errors
More Webcasts
White Papers
5 Key Steps for Assessing Your Security Effectiveness
Exclusive IT Trend Report: Chatbots
More White Papers
Reports
Evolution of Ransomware Gangs
Email Security Threat Report 2020
More Reports

Acer has been going big on Chromebooks. I dont think enough is being said about the fact that there is a demographic that really only needs a browser-based computer.

Google has proved that this type of gadget is something people want, maybe even more than I even would have thought. This is probably because I'm still someone who needs to use native applications, even though many do not these days.
Reply  |  Post Message  |  Messages List  |  Start a Board
Editors' Choice
Hot Topics