A Drone To Watch Over Me - InformationWeek

The Nixie wearable drone aims to turn selfies to stalkies.

Filming others from afar remains suspect behavior, but it could become less so as drones normalize surveillance by enticing us to record ourselves.

A team that includes Stanford post-doctoral researcher Christoph Kohstall, Google technical program manager Jelena Jovanovic, and physicist-filmmaker Michael Niedermayr, along with other PhDs, designers, and engineers, has developed a concept for a drone called Nixie that can be worn on the wrist and can fly to capture high-definition images of the owner.

The proposed drone is one of 10 finalists in Intel's Make It Wearable initiative, a project to promote the development of innovative wearable devices. Finalists receive $50,000 in funding to develop a prototype and compete for the first-, second-, and third-place prizes of $500,000, $200,000, and $100,000, respectively.

[Are you ready for wearables? Read How's Your Enterprise Wearables Strategy?.]

Kohstall said in a phone interview that Intel's seed funding has led him to take leave from his position at Stanford to develop a working prototype. The project has thus become a startup, and Kohstall anticipates that any further funding, if necessary, will be sought through traditional venture capital channels.

Nixie aims to "set your camera free." Kohstall describes the project as a continuation of the automation of cameras, which began with auto-focus and auto-exposure and has now reached the point of auto-positioning. Nixie is designed to allow its owner to take selfies from a distance. It's the equivalent of a personal robotic stalker -- or film crew, to use a more neutral description. 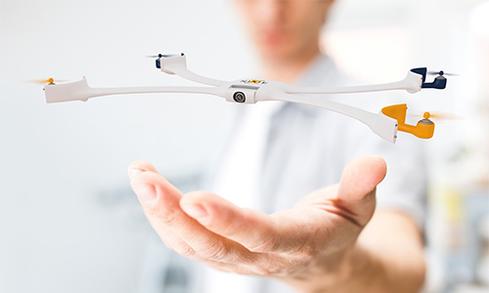 "We want a drone that takes a picture of you, and that's it," said Kohstall, who insisted battery life would not be an issue for such a limited use. He suggested Nixie should be able to be launched, take a picture, and return several dozen times before it requires recharging.

Nixie is technically a wearable device, but it's wearable as a matter of convenience, rather than as a function requirement; it doesn't do health monitoring. Nixie is all about what it can do when not being worn.

You don't have to limit yourself to imagining such a camera. Other drone makers already offer camera-equipped drones to watch over you, though they're not wearable. 3D Robotics added autonomous pursuit capability, called Follow Me mode, to its drone software in June. The company's new Iris+ drone comes with Follow Me support. Two other drones that follow and film, Hexo+ and AirDog, each received more than $1 million in funding from supporters through Kickstarter this year.

Apparently, we can't get enough of ourselves.

Thomas Claburn has been writing about business and technology since 1996, for publications such as New Architect, PC Computing, InformationWeek, Salon, Wired, and Ziff Davis Smart Business. Before that, he worked in film and television, having earned a not particularly useful ... View Full Bio
We welcome your comments on this topic on our social media channels, or [contact us directly] with questions about the site.
Comment  |
Email This  |
Print  |
RSS
More Insights
Webcasts
Data Center Network Operations (NetOps) Reimagined
SASE: The Right Framework for Today's Distributed Enterprises
More Webcasts
White Papers
2020 SANS Enterprise Cloud Incident Response Survey
The Impact of the SolarWinds Breach on Cybersecurity
More White Papers
Reports
Are We Cyber-Resilient? The Key Question Every Organization Must Answer
Building the SOC of the Future
More Reports

Excellent discussion of evolving personal technology, Tom. For some people, this would be irresistable, a sign of technological with-it-ness. the iDrone  / iPhone sold as a set and moving pictures to Facebook in near real time. I will stick to a more minimalist approach myself.
Reply  |  Post Message  |  Messages List  |  Start a Board

Unless you move to the middle of the forest and live in a cave for the rest of your life privacy is a thing of the past. You can accept it, or not. You can adapt, or not.

Whatever you choose to do it won't change the reality that means everyone's life is shared with strangers, companies, governments. There is no way to avoid it.

And, as you can see, any new toy that serves this purpose will always get funding and support.

"Apparently, we can't get enough of ourselves."

That's the way it is these days. Do you know why some people need things like Dixie? Because some people don't have friends around anymore to take pictures for them.

So, after taking your own pictures all from the same angle it becomes boring. The next logical step is to set your camera free to do the job. Nice toy.

You joke, but it's pretty discouraging that a post-doctoral candidate at Stanford is using his talent for something so inane. Better than becoming a Wall St. quant, I suppose.
Reply  |  Post Message  |  Messages List  |  Start a Board
InformationWeek Is Getting an Upgrade!