VR technology was everywhere at this year's Game Developers Conference. But it will be a while before it registers in the real world. 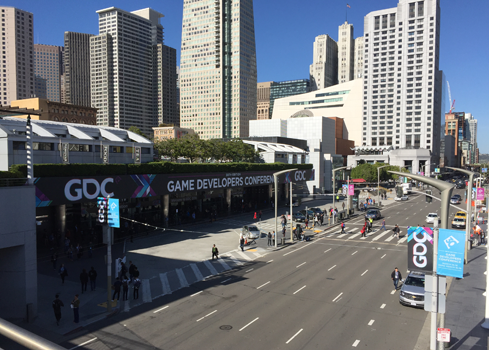 After years of hype, virtual reality is really entering the gaming market. By the end of the month, the Oculus Rift VR headset will be available to consumers for $600, though those with less than top-of-the-line PCs may need to commit to getting the $1,500 package that includes an Oculus Ready PC. About the same time, Microsoft HoloLens is set to ship to developers for $3,000. The HTC Vive VR headset ($800), which also requires an up-to-date gaming PC, should be available to consumers in early April.

Back in November, Samsung released its Gear VR headset for $100. Google is expected to unveil an updated version of its $15 Cardboard VR viewer this year. Sony, meanwhile, is planning to ship its PlayStation VR headset in October for $400 (a separate camera and a PlayStation unit are also necessary).

With the hardware, there will actually be some compelling content. At least 30 VR-ready games will be available for the Oculus Rift when it ships, thanks to efforts to spur developer interest going back to GDC 2015 and the year before, when Facebook acquired Oculus and investment in VR technology took off. Among the more impressive titles is Eve: Valkyrie, a multiplayer space combat simulation. It promises both visuals that impress and character persistence to keep players engaged. VR and MMOs should work well together.

Yet for all the enthusiasm about VR among platform companies, game companies, and hardware makers, mobile and otherwise, VR still has a lot to prove. Recall the hype surrounding 3D television? It took off at CES, starting in 2011, and continued more or less until earlier this year when Samsung and LG showed signs of backing away from the technology. 3D just doesn't add enough to TV viewing to make it worth the bother.

VR adds more and it may add up. Gartner expects sales of head-mounted displays will surge, up from 140,000 in 2015 to 1.43 million this year. That's a start. But with smartphones moving at rate of more than a billion per year, VR has a long way to go before it becomes a mass-market medium. There's reason to doubt it will ever be more than specialty experience.

VR is a path to funding and a revenue generator for cloud companies and makers of graphics software. It can offer an exceptional entertainment experience for a price, provided you don't mind wearing a ridiculous-looking headset that limits your ability to function in the real world. It has one advantage: It's expensive enough to produce that VR companies don't have to worry about indie developers saturating the market, as they've done with mobile games.

Just as 3D movie technology hasn't eliminated traditional cinema, VR won't change the nature or social function of electronic games, mobile or otherwise. It will expand gaming and entertainment, providing a premium experience and enabling new forms of creative expression. But it won't necessarily lead to better storytelling or better game design. A soulless, derivative shooting game won't become a work of sublime inspiration simply because it can be experienced through goggles.

At GDC 2016, developers lined up to experience VR firsthand. The pictures that follow should give you a sense of both the excitement surrounding the technology and its absurdity. Take a look and let us know what you think in the comments section below.

@Whoopty in Canada we are few years behind with VR technology....
Reply  |  Post Message  |  Messages List  |  Start a Board

@alexvidal, I think this days everyone getting in the game of VR, but time will tell, I hope it not gonna be the same end as with 3Ds TV...
Reply  |  Post Message  |  Messages List  |  Start a Board

I agree that VR isn't the most engaging for an audience, but there are ways to film it that make it more so. However for people watching live, it's just about picking the right experience.

I've had a few VR parties over the past couple of years and games that evoke a big reaction in the player are quite good. Lately TiltBrush pictionary has been fun, and getting people's first reaction to Into The Blu is amazing to watch.
Reply  |  Post Message  |  Messages List  |  Start a Board

Wow!! This is amazing. I have been waiting for this news and finally it is out. I can't wait to purchase VR headset for video games. But, I think everyone can not afford the price. If they can release some VR headsets under $500, it will be great.
Reply  |  Post Message  |  Messages List  |  Start a Board
Editors' Choice
Hot Topics