50%
Tweet
Apple reveals its latest iPhone -- possibly two of them -- on Sept. 10. We separate the bogus iPhone rumors from the smart predictions. 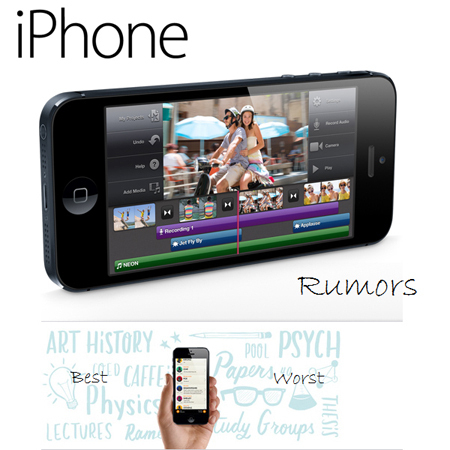 On Sept. 10, Apple is expected to unveil a new iPhone -- or perhaps two. If you follow iPhone gossip, you're already aware that Apple might do things a little differently this year. Rather than launching a single new phone, CEO Tim Cook and staff are expected to reveal two models: the premium iPhone 5C, the next step up from the iPhone 5, and the iPhone 5C, a less pricey version targeted at cash-strapped consumers in the emerging and developed worlds.

As is always the case before an Apple product release, iPhone rumors have been swirling for months. Why pay attention to them? Because they're usually accurate, albeit with a few clunkers that seasoned Apple watchers can generally spot. If The Wall Street Journal reports that Apple is testing iPhones with six-inch screens, that's probably a reliable bit of gossip. But if Joe's Tech Blog insists the iPhone 5C will feature a fold-out massage table, well, you be the judge. (To be fair, sometimes little-known bloggers break stories first, so you never know.)

This year's iPhone launch is particularly interesting in light of recent global smartphone developments, including Android's growing dominance in developing regions, markets that Apple hopes to crack with its rumored iPhone 5C. At the premium end of the market, the iPhone is facing a growing number of quality competitors, including the aluminum-framed HTC One, the Nokia Lumia 1020 with its 41-megapixel camera, and the feature-packed Samsung Galaxy S4, the iPhone's arch-nemesis.

Many questions will be answered Tuesday, while others won't be resolved for months. Will the iPhone 5C be priced low enough for Apple to boost its global market share? If it's priced too low, will the 5C provide a substandard experience that damages Apple's premium brand? And if the iPhone 5S retains a four-inch screen as expected, will it appear behind the times as five-inch and larger phones grab a bigger slice of the market?

Last year's rumors leading up to the September 2012 debut of the iPhone 5 launch painted a fairly accurate picture of that device's dimensions, appearance and capabilities. This time around, there's little reason to suspect the leaked iPhone specs and furtive photos we've been seeing for months are bogus. Again, we'll know for sure on Tuesday.

In this slideshow we review the best and worst iPhone 5C and iPhone 5S rumors. Which ones will turn out to be true? Dig in to read our predictions of what's real and what's ridiculous.

Comment  |
Email This  |
Print  |
RSS
More Insights
Webcasts
Emerging Security Threats Your Enterprise Should Be Aware Of
Protecting Mobile Apps and APIs from the Inside Out
More Webcasts
White Papers
Wi-Fi 6: The (Much) Bigger Story
2020 Trends to Watch: Cybersecurity
More White Papers
Reports
The New Face of IT Automation
State of Cybersecurity Incident Response
More Reports

A former colleague of mine recently raised the point on Twitter that the rumor buzz about phone colors seems silly in this day and age when almost every iphone user can get a case in any color of the rainbow, personalized with pictures even. Does phone color even matter? Almost everyone puts the iPhone in a case.
Reply  |  Post Message  |  Messages List  |  Start a Board

Agreed. Apple tends to declare a standard and hope its choice becomes so rather than waiting until there's industry consensus.
Reply  |  Post Message  |  Messages List  |  Start a Board

I'm curious to see how the (possible) finger print scanning feature would affect iPhone use in terms of how much secure information people are comfortable storing on their phones.
Reply  |  Post Message  |  Messages List  |  Start a Board
Editors' Choice
Hot Topics