Virtual reality was the spicy side dish to the main serving of smartphones at Mobile World Congress this year. Products on display included headsets, 360-degree cameras, and immersive gaming devices. Here are our five favorite picks from the show floor. 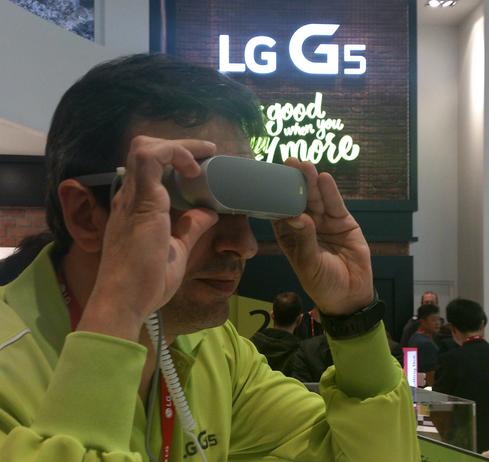 BARCELONA – If mobile devices were the main course served up at Mobile World Congress, Feb. 22-25 here, then Virtual Reality products were the spicy side dishes.

Facebook founder and CEO Mark Zuckerberg made a surprise appearance at the Samsung Unpacked event on the eve of the conference, where he took the stage to talk about VR and 360-degree immersive video as the new ways of sharing life experiences on social media. But VR wasn't merely talked about in the abstract. Each of us in attendance at Samsung Unpacked had an Oculus VR headset waiting for us at our seats. The stage, located in the center of the room, was a large black box that opened to the ceiling. We used the VR headsets to watch the introduction of the Samsung Galaxy S7 and S7 Edge smartphones.

You can see the entire presentation here:

Samsung certainly wasn't the only company focusing on VR at MWC. LG, HTC, and Sony also showed off a range of VR-related products, including 360-degree cameras, VR headsets, and immersive gaming devices.

Many of the VR headsets on display are designed to integrate with your smartphone, though we're not entirely clear on how "mobile" you can be wearing one of these rigs. The cameras are meant to make it possible for anyone to create and share 360-degree video. Some are even compatible with Google Street View to give you a location-aware experience. Here, we bring you five of our favorite VR products from Mobile World Congress.

Once you've had a chance to review these, tell us what you think in the comments section below. Is VR the wave of the future for you? Or is this nothing more than a passing fad?

Pablo Valerio has been in the IT industry for 25+ years, mostly working for American companies in Europe. Over the years he has developed channels, established operations, and served as European general manager for several companies. While primarily based in Spain, he has ... View Full Bio
We welcome your comments on this topic on our social media channels, or [contact us directly] with questions about the site.

USB Type-C is in its early stages. By the end of 2016 phones, tablets, laptops, and even desktops without USB Type-C will seem archaic. The fact that USB Type-C is reversible, can be used for power, data, and video in such a small connector is a big plus for smartphone brands. You don't need to have an additional HDMI connector, for instance.
Reply  |  Post Message  |  Messages List  |  Start a Board

"I don't see how it can affect the enterprise market though, although are you talking about the various applications these 360 cameras will be having? Companies can exploit the power provided by such a camera. "

@SunitaT0: A large number of companies use videos to demonstrate their products as it's an inexpensive medium. If they can make 360 videos of their products it'd provide a much enhanced experience and users would be able to get a better idea of the products.
Reply  |  Post Message  |  Messages List  |  Start a Board

@nasimson, I think the main issue with the LG model will be price. Both the LG and the Samsung units are designed for the average consumer, not for the hardcore gamer who spends serious money.

Also, the LG model uses USB Type-C, which is only available on a handful of devices.
Reply  |  Post Message  |  Messages List  |  Start a Board

LG 360 will be a failure for many reasons: Looks; cable hanging out of the head; high price due to two OLED screens. It does has a weight advantage though as you don't have a mega size phone resting on your nose.
Reply  |  Post Message  |  Messages List  |  Start a Board

@Tzubair: I don't see how it can affect the enterprise market though, although are you talking about the various applications these 360 cameras will be having? Companies can exploit the power provided by such a camera.
Reply  |  Post Message  |  Messages List  |  Start a Board

@SachinEE: Like Pablo said, many other companies have tried that. 360 video camera means more power to Google Streetview. I believe 360 Cameras will be the new rage in the coming years.
Reply  |  Post Message  |  Messages List  |  Start a Board

@Pablo: I think Samsung is focusing on the 360 video experience because Facebook has invested in Samsung for this project. I personally think it's likely to be the next big thing in terms of the way people experience videos. It will have impact both on the consumer and enterprise market.
Reply  |  Post Message  |  Messages List  |  Start a Board

@SachinEE there were many other devices at the show like that, from small robots with security cameras to rolling cameras on the floor.

But Smasung was focusing on the 360 video experience, as a new way to engage with people and make video a much more inmersive experience for social media.
Reply  |  Post Message  |  Messages List  |  Start a Board

Samsung should make a 360 security camera with a big cloud storage and let us sync our headsets with it. That'd be cool.
Reply  |  Post Message  |  Messages List  |  Start a Board

The Samsung VR headset is pretty good, it resembles the Lenovo K4 Note headgear. But Lenovo headgear had some calibration issues I heard, that shouldn't be the case with Samsung. They would be giving an immersive experience to users.
Reply  |  Post Message  |  Messages List  |  Start a Board
Editors' Choice
Hot Topics