5 Best Tablets For The Holidays - InformationWeek

Looking for the perfect gift for your beloved this year? Something tells us a tablet might be just the ticket. BYTE looks at five: The Apple iPad 4, the iPad Mini, the Samsung Galaxy 10.1, the Microsoft Surface, and the Kindle Fire HD. 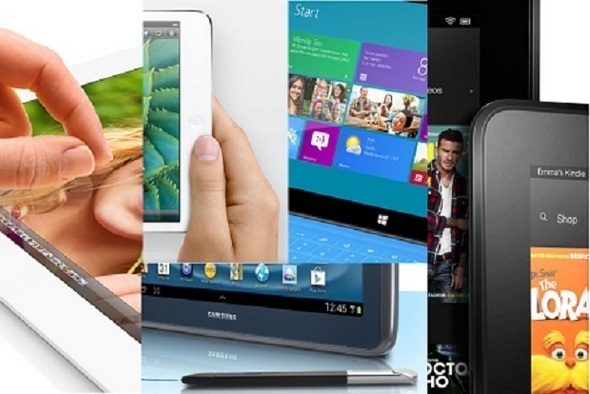 A few short years ago netbooks were all the rage. The small, light and cheap ultra-portable PCs were popular holiday gifts, especially for high school and college students because parents could buy a Windows laptop for as little as $200. Today, tablet PCs have grabbed the spotlight. With their mobile broadband and Wi-Fi connectivity options, and ability to create and edit documents -- not to mention their usefulness as e-book readers -- tablets satisfy many of the same needs and desires as netbooks, all in a machine that's easier to use and carry.

There are more tablets vying for your attention this year than ever before. So BYTE chose the five tablets we think will do the best job of making your holidays merry and bright. Some of them -- the fourth-generation iPad, Samsung Galaxy Note 10.1 and Microsoft Surface -- are priced over $500. You get what you pay for. The iPad Mini costs less and the Kindle Fire HD is the least expensive, but they might not fulfill your needs.

Our advice: Stick with what you know. Something familiar will be the easiest to learn and give you the most enjoyment out of the box. If you already own an iPhone, for instance, or are really into your iPod Touch, an iPad or iPad Mini might be the best bet. You should be able to run most of your iOS software on your new device. Which iPad you choose depends on your budget and size preference.

If handwritten notes or document annotation are important to you, Samsung's Galaxy Note 10.1 could be a good choice. As an Android tablet it has an immense app catalog and a good collection of accessories. The only drawback is that there have been reports of moderate to severe lag between writing and the appearance of the digital ink on the screen, though we had no problems. Windows might be the oldest platform in this group but it's also the biggest wild card right now. The Microsoft Surface tablet with Windows RT has the potential to be the most productive tablet in this group -- it comes with a keyboard and Microsoft Office. But right now it also has the smallest app catalog, not to mention an entirely new Windows touch interface some people might not like. Don't buy it until you've gone to a store and tried it out in person. If e-books are your focus, a Kindle Fire HD might be the right choice. Like Apple's new iPad Mini, the Fire HD's strengths are its portability and easy-to-read screen. It also has a wealth of Android applications available. Again, sticking to what you know and pairing your Android smart phone with an Android tablet will help save money on apps as some might work on both devices.

Any way you look at it, tablets are big this holiday season, and you probably have at least one person on your gift list who wants one. Consider the familiarity of the operating system, and the availability of apps for the tablet you're considering, and chances are the recipient will be happy with your purchase for a long time.