10 Tablets That Will Shake Up 2012 - InformationWeek

50%
Tweet
Big screens, small screens, with and without Windows, some with keyboards, and everything in between. Here's a sneak peek at the diverse batch of tablets expected this fall. 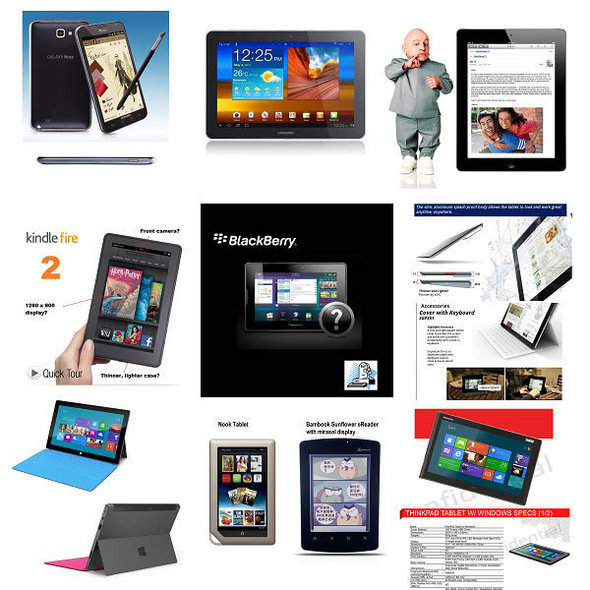 Tablets of all shapes and sizes are expected to debut this fall, many featuring Microsoft's Windows RT and Windows 8 operating systems, others running a variant of Android. Each has the challenging task of luring consumer and business customers away from Apple's iPad, which dominates the tablet market by a sizable margin.

Just how popular is the iPad? According to new data from market research firm IDC, tablet manufacturers shipped 25 million slates in the first quarter or 2012. Now here's the jaw-dropper: 17 million of those slates were iPads, giving Apple more than 68% of the global market. Samsung came in second with a 9.6% share, and Amazon was third with 5%.

The iPad, of course, has no lock on the nascent tablet space, particularly when businesses and consumers are still figuring out what tasks the devices do best. The recent debut of the Google Nexus 7, a sturdy 7-inch slate with surprisingly good specs for a $199 device, is forcing tablet makers to pick up their game. Amazon, for instance, is expected to launch a new Kindle Fire this fall, one with a better build (i.e., less plastic) and a higher screen resolution.

Apple, meanwhile, hasn't been blind to the growing popularity of 7-inch tablets, devices the company's executives once dismissed as being too small for practical use. Rumor has it that Apple is readying a small tablet with a 7- to 8-inch screen to battle the likes of the Kindle Fire, Nexus 7, and Barnes & Noble Nook Tablet. This "iPad mini" could arrive as early as mid-September, but the device's specs and price remain a mystery.

Samsung is coming on strong in the global tablet market as well, more than doubling its second quarter shipments from a year ago, IDC said. The company is currently banned--at least temporarily--from selling its Galaxy 10.1 in the U.S., pending the outcome of the Apple-Samsung patent infringement trial. However, nothing is keeping Samsung from designing new 10-inch slates that, well, look a little less like the iPad.

The most intriguing character in the tablet race is Microsoft, a mobile also-ran that's not only launching the touch-friendly Windows 8 OS in October, but also is introducing two tablets of its own: The consumer-oriented Surface RT, and the enterprise-friendly Surface for Windows 8 Professional.

Click through the slideshow below to learn more about the hottest tablets due to arrive in the coming months.

Any new 7 inch Android tablets in the works - aside from Amazon's and B&N's? Or, has the Google's Nexus 7 shut down that market for any new offerings from Asus/Tosh/Other?
Reply  |  Post Message  |  Messages List  |  Start a Board