From Ballmer to Jobs, tech leaders write memos, manifestos, and rants that shape how we all think about computing. These 10 provocative statements each have a place in tech history. 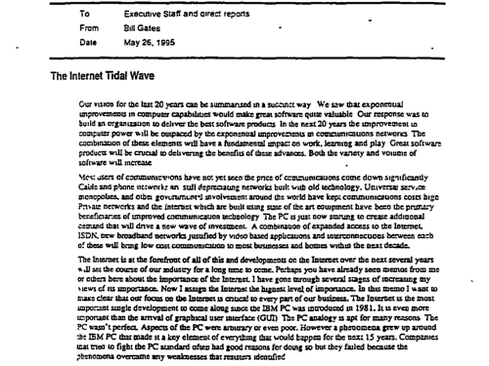 Technology tends to be associated with cold, mechanical precision. Nevertheless, the technology industry attracts a fair number of outspoken firebrands.

Perhaps the opinionated nature of noted technology leaders is a consequence of the personality traits required to press ahead in the face of naysayers, skeptics, and rivals. Whatever the reason, the tech industry has given rise to a plethora of indignant memos, manifestos, and rants rich with self-righteousness and personal conviction. They describe what's wrong with the world and how to set things right.

They tell us to think different(ly).

The following texts are 10 of the most meaningful, entertaining, astute, and provocative pieces to appear online in the past two decades.

[ From Amazon to Y2K, here are the stories behind some of the most pivotal developments in technology over the past quarter century. See InformationWeek's Most Important Cover Stories. ]

Steve Yegge, Google: Stevey's Google Platforms Rant
Google engineer Steve Yegge spent six years at Amazon, and in 2011 he used that experience to inform his indictment of what Google does wrong and Amazon does right. It's remarkable in its candor. And it's a testament to Google's maturity as an organization that Yegge remains employed at Google and his criticism remains online, albeit hosted by a third-party Google+ account.

The gist of his argument is that Amazon gets platforms and Google doesn't. That's less true today than it was then -- Yegge's observations evidently were noticed by Google management. But the rant continues to be relevant for Google and for any company operating a platform business or thinking about doing so.

Yegge's rant is made more meaningful by his follow-up post a week later. And it contrasts with subsequent observations about how he believes Amazon "is in the bottom half of the industry in terms of being a nice place to work" and Google "is undoubtedly in the top 0.1% of the best places to work in the world, across anything even remotely computer-related."

James Whittaker, Google: Why I Left Google
A former professor of computer science at the University of Florida, Whittaker founded a security software firm, joined Microsoft, left for Google, and then returned to Microsoft. He left Google early last year, disenchanted with the changes brought about by CEO Larry Page. His widely read public letter, "Why I Left Google," is perhaps the best known of a small but apparently growing list of public departure letters -- see also Spencer Tipping's "Why I Left Google" and Douglas Bowman's "Goodbye, Google."

Whittaker recounts how Google went from being an innovative, decentralized company under Eric Schmidt to an advertising machine focused solely on remaking itself in the image of Facebook through Google+.

His criticism about Google+ still resonates:

Sharing was working fine and dandy, Google just wasn't part of it. People were sharing all around us and seemed quite happy. A user exodus from Facebook never materialized. I couldn't even get my own teenage daughter to look at Google+ twice: "Social isn't a product," she told me after I gave her a demo. "Social is people and the people are on Facebook." Google was the rich kid who, after discovering he wasn't invited to the party, built his own party in retaliation. The fact that no one came to Google's party became the elephant in the room.

And yet as Whittaker himself admits in his post, "Truth is, I've never been much on advertising." Google is an advertising company and advertising has gone social, perhaps unavoidably and forever. The good old days when the web was free, the NSA sought permission to listen, and we were ignorant about how web services and Soylent Green were made -- OMG, it's people's data! -- are long gone, if they were ever anything more than self-delusion.

Brad Garlinghouse, Yahoo: The Peanut Butter Manifesto
Yahoo's low point came in late 2010. But in 2006, Brad Garlinghouse, then Yahoo senior VP, saw where things were headed. In an internal memo leaked to The Wall Street Journal, he castigated the company for its lack of vision, ownership, and accountability, using a rather odd metaphor:

I've heard our strategy described as spreading peanut butter across the myriad opportunities that continue to evolve in the online world. The result: a thin layer of investment spread across everything we do and thus we focus on nothing in particular.

I hate peanut butter. We all should.

Let it be said that peanut butter is awesome, unless you're allergic to it. But otherwise Garlinghouse was on to something. Had Yahoo's management at the time paid more attention, perhaps its recovery would not have taken so long.

Earlier this year, Garlinghouse posted a follow-up note through LinkedIn, in which he suggests the problems he identified were merely symptoms of a larger problem: failed corporate culture. The good news is that Marissa Mayer appears to be dealing with that, without disparaging everyone's favorite lifesaving, nutrient-rich, nutty spread.


It's funny how with a lack of context, Bill Gates looks foresightful. The reality is that Microsoft ignored the Internet for way too long. Think about it; Microsoft launched IE in 1995, but was beaten to the punch by Mosaic, Lynx, Cello, Arena and tkWWW to name but a few. Even by IE4, Microsoft only had 18% of the browser market - it was a Johnny-come-lately in terms of the Internet, and while it gained eventual dominance after integrating IE into the OS, as I recall, that particular memo demonstrated Bill Gates' late realization that if Microsoft did not jump on the growing Internet wave, they would be left behind.

If you look at it that way, Microsoft screwed up by understimating the importance of the Internet and having to play catch up, and then did exactly the same for mobility.
Reply  |  Post Message  |  Messages List  |  Start a Board

While these memos are slices of time, it is interesting to see the foresight of Bill Gates about the coming tidal wave of the Internet -- and how Microsoft just didn't seem to get the mobile tidal wave that would follow.  Have to agree with the observation here:  "Seeing a tidal wave doesn't make you a better swimmer"
Reply  |  Post Message  |  Messages List  |  Start a Board

To improve its visibility and get the solid footprint in mobile market, MS has the alliance with Nokia on WP platform. But after few years, the WP platform is still not so popular. I have echo Stephen's memo - the platform is still burning. I am not a mobile platform nerd to predict the future but I do believe there is still long way to go for WP in this competitive market.
Reply  |  Post Message  |  Messages List  |  Start a Board

@David, While we await one of these from a high-ranking Amazon insider, the one cited at the end of page 3 from Amazon contract worker Steven Barker is worth reading.

"But if you really want to create a positive work environment and generate productivity and employee loyalty, give your employees some job security."
Reply  |  Post Message  |  Messages List  |  Start a Board

Ray Ozzie's "Dawn of a New Day" exit memo three years ago warned that Microsoft was not prepared for the post-PC world. I think that one actually motivated Ballmer. But he moved too slow.
Reply  |  Post Message  |  Messages List  |  Start a Board

We talk about "Rants vs Memos" - implying that in a memo a policy change was made that altered the direction of the company - but with a "Rant" the problems were articulated - but the company failed to act.  Microsoft got their visionary memo, changed policy to embrace and extend the internet - then Bill retired and the company coasted.  They needed another memo - but nobody was around to write it. With Elop at Nokia, he was right, but the company was too far out in the North Atlantic to rescue.  Note that the same memo/rant was not provided to Blackberry and the outcome was the same.

Another point - Bill's memo is now nearly 20 years old.  Its core idea that the Internet would be a PC enabler was quite astute at the time.  I can't penalize him for not clearly articulating that in 10 years the Intel strategy of evolving a synthesis between comms and compute would be realized so that the bulk of everyday PC functions could be performed on a phone.  I guess he may have expected that there would be a course correction or guidance coming from the top as time marched on.  Too bad Microsoft ended up getting M-Ballmerized.
Reply  |  Post Message  |  Messages List  |  Start a Board

Given Microsoft's stumbles and struggles in the mobile market over the last four years, Ahonen's rant was deadly accurate. Ballmer et al did not take smartphones seriously enough. In '09, the tablet frenzy hadn't happened yet, but the iPad's appearance a year later would only escalate Microsoft's mobile cluelessness. Meanwhile, Android's sudden popularity poured more gas on the fire. The "me too" Microsoft mobile products rolled out in 2011 - present. But very late to the party. I'm sure Ballmer is kicking himself.
Reply  |  Post Message  |  Messages List  |  Start a Board

Terrific roundup, but why start with two slamming Google? I guess they're also a couple of the most recent out of this bunch.

I have to wonder a bit about the companies we haven't seen these from, like a rant from an Amazon.com employee. Based on recent profiles, it might be that Jeff Bezos is too scary of a boss to diss while you're on the payroll.
Reply  |  Post Message  |  Messages List  |  Start a Board

In that sense, the issue with the tidal wave was less that they didn't know to swim; it was that they didn't know where the tidal wave was coming from or landing.  At that time, the focus was on NCs ("Network Computers"), which failed marvelously.  (They are, in a way, making a small comeback though via Google, repackaged as "Chromebooks").  I suspect this is what Gates was probably referring to at the time.

The thing about Apple, Flash, and third-party apps is that when we look at iTunes apps, Android apps, and Facebook apps, they are mere commodities.  They are prolific, replaceable, and non-essential.  Flash, however, is not a commodity.  It is a platform unto itself.

So I wouldn't go so far as to say Jobs was wrong here.  You said it yourself: the threat from Flash was to Apple's control of its own platform.  "Commodity" apps don't typically carry such a threat, but Flash (and similar applications) did and do.
Reply  |  Post Message  |  Messages List  |  Start a Board
Page 1 / 2   >   >>
Editors' Choice
Hot Topics