The IFA tradeshow in Berlin produced a wealth of new smartphones and smartwatches to keep us all connected. From Sony, to Samsung, to Motorola, here's the best of the best. 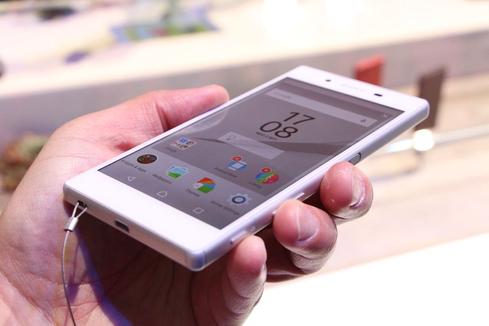 BERLIN -- IFA has become a hotspot for smartphone and wearable announcements. The Berlin-based tradeshow may not carry the weight of the Consumer Electronics Show or Mobile World Congress, but it is important enough to attract mobile device makers from around the world.

Samsung has contributed heavily to IFA's upsurge in recent years. The South Korean company has used the German tech show to launch the Galaxy Note, Note 2, Note 3, and Note 4 smartphones, as well as the first Galaxy Gear smartwatch. Samsung moved the Note 5's release up by a few weeks this year to avoid colliding with Apple's iPhone 6s (expected Sept. 9).

The Note 5 played a large role in Samsung's presence in Berlin, but it was not the company's focus this week. Instead, Samsung was all about the Gear S2, its next-generation smartwatch. The wearable made a splashy debut in Berlin's iconic Tempodrom.

Other phone and smartwatch companies were on hand with their latest tech, too, much of which will reach stores in the weeks ahead.

[Check out these must-have apps for Windows 10.]

Chinese phone builders were most prevalent around the Messe in Berlin. For example, Acer and Asus kicked things off on Sept. 4 with a flood of new phones for Asian markets. Huawei followed later in the day with a flagship handset, and Lenovo capped day one with several large phablets of its own. ZTE was sure to show off its latest smartphone, which can identify people -- and unlock the phone -- through their eyes.

LG and Motorola were on hand, but didn't reveal any new smartphones.

Smartwatches made a huge impact at IFA, and were perhaps the talk of the show.

Huawei's Android Wear timepiece is a high-class and high-cost marvel. Samsung's Gear S2 could be hugely popular thanks to expanded compatibility with non-Samsung handsets. The Alcatel smartwatch targets cost-conscious buyers, but Motorola's Moto 360 aims for the fashion-focused.

@ Li tan. I agree. I think what is missing today are more star product.  I think both tablets and smartphones have been pushed to their limit.  They all look too similar with one another.  Even, the new Ipad is just like the Surface Pro.  I think that there continue to be a space for device that will have the same impact as the Iphone when it first came up.  What would such device be or look like?  We can submit our suggestions to the enginners at Apple or Google. I think they need our help, because they are running out of ideas(making a smartphone bigger isn't a major innovation.
Reply  |  Post Message  |  Messages List  |  Start a Board

Definitely that's an advantage for the consumer - more competition, more choices. But on the other hand we also need more start products - I mean the product with unique differentiator compared to peers.
Reply  |  Post Message  |  Messages List  |  Start a Board

The wide variety of smartwatches has provided a great opportunity for consumers.  For those, individuals whom aren't crazy for an Iwatch they can try out alternatives which fits with their unique needs and budget.  What would be better for consumers,  2 smarthwatch makers or a pack of manufactures.  I believe the more competition the better.
Reply  |  Post Message  |  Messages List  |  Start a Board
Editors' Choice
Hot Topics