10 Best And Worst Cellphones Of All Time - InformationWeek

From clamshell to multitouch, these cellphones made their mark -- for better or worse. 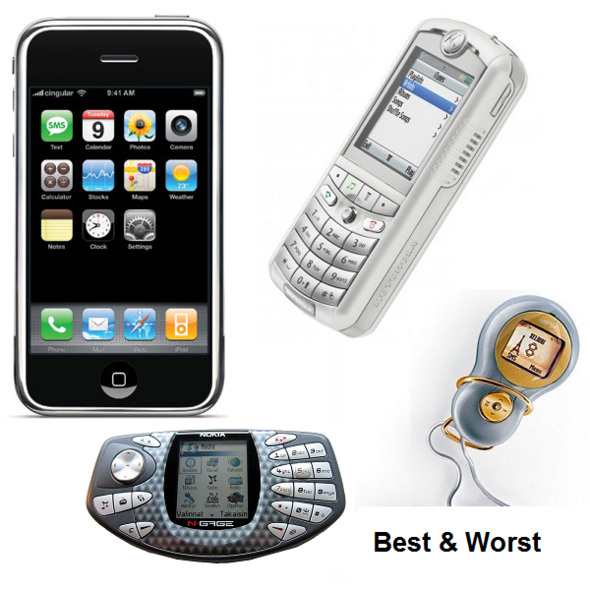 In case you haven't heard, the cellphone celebrated its 40th birthday this past week. In its brief lifespan, the mobile phone has had an enormous impact on human society, including in developing regions where the personal computer remains prohibitively expensive.

How big of an impact? There are 6.8 billion mobile cellular subscriptions worldwide this year, according to the United Nations' International Telecommunication Union. To put that number in perspective, that's nearly as many subscriptions as there are people on earth (more than 7 billion).

Of course, this doesn't mean that cellphone technology has reached its limits of innovation. Far from it, in fact. Those of us who live in areas with so-called advanced 4G LTE mobile networks still suffer from the occasional dropped call, spotty reception or poor audio quality.

The mobile industry can do better, which is precisely what 85-year-old Martin Cooper, the retired Motorola engineer better known as the "father" of the cellphone, said in an interview last week with the BBC. The technology exists to improve coverage and capacity of cellular networks, but wireless carriers thus far have focused on speed instead, Cooper opined.

Although the cellphone was invented in 1973, it didn't emerge as a viable commercial product until the 1980s. Early mobile handsets were expensive, heavy and bulky; they were luxury items enjoyed by the privileged few. There's an iconic scene in the 1987 film Wall Street where ruthless corporate raider Gordon Gekko, standing on the beach in his bathrobe, is chatting on his 2.5-pound Motorola DynaTAC, the first commercially available wireless phone that cost a cool $3,995.

At the time of the movie's release, the scene conveyed Gekko's wealth, power and arrogance: "Wow, he's on the beach, talking on a phone ... with no wires!" Twenty-six years later, the massive, shoe-sized DynaTAC looks laughably oversize and about as technologically advanced as an 8-track tape player. And with the majority of the human race now possessing smaller, cheaper and far more capable mobile phones than the one used by the diabolically greedy Gekko, the device's elitist aura is a distant memory as well.

The cellphone went mainstream in the '90s, and manufacturers began rolling out a wide variety of handsets designed to be both functional and fashionable. In honor of the cellphone's 40th birthday, we've decided to spotlight the best and worst mobile phones from the past two decades.

You might have used one or more of these phones in its heyday. Others you might have forgotten -- or wish you had.

No doubt about it you missed the worst phone ever. The samsung note 3 is my first smartphone and it couldn't possibly be worse. I am constantly watching other people us their phone while I am without service.

I only have service in areas with very strong signal. Don't even think of using it on the interstate especially for directions. I rely on the garmin to get around and have no means of emergency communication.

It does function at home and work but few other locations. My wife, son and I are on the same verizon plan. They always have service but it's rare that I do.

The sales person at verizon didn't tell me to drive around and see if it operates like normal cell phones. By the time I found out it was garbage the return period had expired and I was stuck.

All the other features like a large screen, big processor and battery life are meaningless without a signal.
Reply  |  Post Message  |  Messages List  |  Start a Board

All mobile phones have a number of features in common.The most commonly used data application on mobile phones is SMS text messaging.free classifieds list

You now that I have to add one to the list, the Razor, I t was cutting edge for its time. Not to mention a fraction of the size of other cell phones on the market at that time. I would have to agree with the other commenters, refreshing the whole page for a slide show is a ridiculous amount of time wasted. I almost dread reading these articles, because I believe they are set up to be quick reads but go against time saving. I have also read several article with comments about this issue, but nothing seems to be changing.

It seems these slide shows are degenerating into only photos. This one desperately needs text to explain which ones the author thinks are best and worst. Also, the date and model information should be provided.
Reply  |  Post Message  |  Messages List  |  Start a Board

You left out the phone that started the candybar craze which dominated the decade even more than the clamshells and blackberry phones: The tiny Nokia 82xx series (like the 8210 and 8260). The 82xx series were thin, small, and awesome phones and everyone had one variant of the candybar or another.

Also, although it's a good phone, the Galaxy SIII is not revolutionary in any way and certainly does not belong on this list. What exactly sets it apart from the iPhone? Samsung has done an amazing job of cloning the "design of the moment." They did it with the candybar phones that Nokia started, then with the Razr clamshells, then with Blackberry (which they went as far as to name the Blackjack!) and finally with the Galaxy phones. None of them were revolutionary nor belong on this list... even if they were decent phones.
Reply  |  Post Message  |  Messages List  |  Start a Board

Levon,
OGM. You are so right. I wanted to view the slide show and read the article. I would suggest that who ever set up the slide show needs to have their head examined. Who in the hell refreshes an entire HTML page with each click of the slide. What a bozo. After I finish this post I am going to bail-out and find something else interesting.

Mr. Bertolucci needs to go pay the IT or marketing department a visit.
Reply  |  Post Message  |  Messages List  |  Start a Board

What about Worst Slide Show software of all time - with Information Week's vintage, "refresh the whole page," at #1?
Reply  |  Post Message  |  Messages List  |  Start a Board

StarTAC did not fade, it became impossible to get one. When found on eBay, getting Sprint to connect it, supposedly thanks to number portability rules, was another hurdle. The bloated, color-screen Timeport could not be read in daylight, while the fragile KRZR ("Spock's Coffin") was snubbed by the "Worst" list. The Photon is not bad, unless you want to speak with someone.

Hey Motorola, I don't need a too-small computer, I need my StarTAC! And not that Sanyo clone you're selling in Korea that is nothing like a StarTAC. I want my hockey puck back!
Reply  |  Post Message  |  Messages List  |  Start a Board
Editors' Choice
Hot Topics