50%
Tweet
Heard enough about Angry Birds and Pandora? Check out these 10 lesser-known Android apps to enhance your productivity, well-being, and more. 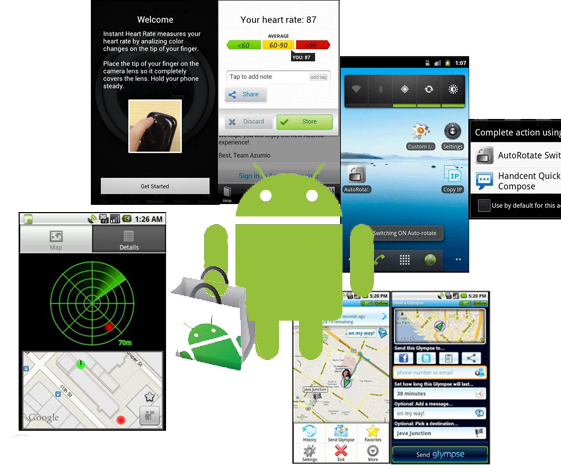 Words With Friends? Check. Skype, Netflix? You have them, of course. What else is out there?

With more than 400,000 selections in Google's Android Market, not to mention the thousands of apps in Amazon's Appstore for Android, and in other app bazaars, it's not easy for you to uncover hidden gems. But there are still buzzworthy apps which, for whatever reason, haven't gotten a lot of play from the press or public.

The easiest way to find interesting apps, of course, is to frequent the app markets and sample the wares, search for apps that interest you, and check out the top-rated user picks and editors' choices. Need more guidance? Try using recommendation apps that help you find more apps, such as Best Apps Market's BAM and One! tools.

But while Android smartphone users have an abundance of apps to wade through, their Android tablet-toting counterparts have the opposite problem--a dearth of choices. The anemic selection of apps for Android slates is no secret, of course, and several factors are to blame. For instance, consumers have been cool to Android tablets to date, a fact that has damped developer interest.

The fragmentation of the Android platform hasn't helped either. According to Google, most Android phones and tablets are still running Gingerbread, despite the fact that newer versions, including tablet-friendly Honeycomb (Android 3.x) and Ice Cream Sandwich (Android 4.x), are available.

Indeed, Android as a tablet OS is very much a work in progress--a fact that also dampens enthusiam among some app developers.

Among our 10 sleeper picks, each offers something a little different, in some cases adding a mobile feature that you didn't know you absolutely, positively needed, or, wanted, until somebody told you about it. Glympse, for instance, gives other mobile and PC users a real-time view of your location. And Car Locator is an essential tool for drivers who've forgotten where they've parked. Couldn't happen to you, you say? Consider this dangerous traveler's cocktail: a business trip, a rental car, and an unfamiliar city. Add in a late night at some urban haunt and, you'll soon see the value of an app that helps you find your vehicle.

We'll admit that the term "sleeper app" is vague. After all, a useful, innovative app generally grabs some sort of buzz, and we're not suggesting that all of our picks are complete unknowns. In fact, you may already have heard of a few them. Perhaps you've installed some of them. If so, great! If not, here are 10 nifty apps worth checking out.

Android applications are very easy, user friendly and eventually maintain a class. I have used them......... you described lots more, Thanks buddy
Reply  |  Post Message  |  Messages List  |  Start a Board