The bidding war for HERE heats up as the vehicle-for-hire startup Uber reported makes a $3 billion bid for Nokia's struggling maps division.

Though Uber is best known as a low-cost alternative to taxicabs, a report in The New York Times indicates the company has its sights set further down the road to success, specifically by targeting Nokia's HERE maps.

The report, which cited three anonymous sources familiar with the deal, said Uber has submitted a bid for as much as $3 billion for Nokia's HERE maps business, which is Google Maps' main competitor.

Uber is not alone in its attempt to buy the mapping service. Since April, when Nokia revealed plans to possibly sell its struggling maps division, German automakers like Audi, Mercedes, and other market leaders like Facebook have begun a bidding war for HERE.

Nokia launched a HERE Beta app for Samsung Galaxy smartphones in August 2014. The app became available on all Android devices running on version 4.1 -- Jelly Bean -- or higher in October. An iOS version debuted in March of this year. 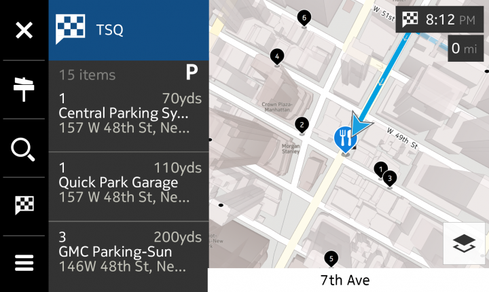 The service is available in 196 countries, with features including include turn-by-turn walking navigation, offline availability, 3D landmarks, and indoor venue maps for 90,000 buildings in more than 70 countries.

Other features include photos of the surrounding locations, a weather toolbar, and personalization options that allow users to tag favorite places.

Both companies have the benefit of disseminating their maps through the broad adoption of operating systems and the smartphones they power.

While Nokia may have a way to go to catch up with Google Maps or even Apple Maps, it does have a considerable foothold in the built-in navigation market for automobiles.

The company's official HERE blog reported that 6.1 million new cars drove out of the showroom with the maps service on board in the first half of 2014, representing a 25% increase compared to the same period last year.

"HERE has hundreds of cars driving around every day, each capturing around 700,000 data points per second," company spokesman James Ethridge wrote in the post. "We collect nearly 60 billion probe points per month and 85 per-cent of our data is under five minutes old. The result is an astonishing 2.7 million updates to our maps every day."

The company also boasts a slate of partnerships in the past two years that include major automakers like Honda, Mitsubishi, and Volvo.

This year, the company also announced partnerships with premiere luxury carmakers Jaguar Land Rover and BMW. According to reports, BMW is also looking to buy the company.

"There are only a few mapping businesses in the world," Ehud Gelblum, a Citigroup analyst told The Times in April 2014. "It's a valuable asset."

Nathan Eddy is a freelance writer for InformationWeek. He has written for Popular Mechanics, Sales & Marketing Management Magazine, FierceMarkets, and CRN, among others. In 2012 he made his first documentary film, The Absent Column. He currently lives in Berlin. View Full Bio
We welcome your comments on this topic on our social media channels, or [contact us directly] with questions about the site.
Comment  |
Email This  |
Print  |
RSS
More Insights
Webcasts
Strategies for Success with Digital Transformation
ROI and Beyond for the Cloud
More Webcasts
White Papers
Two-Factor Evaluation Guide
Transforming the Corporate WAN: Enterprise Network Insights
More White Papers
Reports
The State of Threat Detection and Response
How IT Security Organizations are Attacking the Cybersecurity Problem
More Reports


We collect nearly 60 billion probe points per month and 85 per-cent of our data is under five minutes old.


Wow, that's way better than google maps. They still have my house from a couple of years ago. I can tell because my mom hasn't biked anywhere in at least two years and her bicycle is out front in the photo. If tey continue to have that kind of up to the minute maps they may be able to gain some real ground.

As much as I think the purchase of Nokia's HERE is a good move for Uber, I wonder if it's not purely to help it distance itself from Google. It could well be that Uber is angling for a public offering and hopes that having its own mapping service wil make it look like a more diverse company when it comes to putting its shares on sale.
Reply  |  Post Message  |  Messages List  |  Start a Board

Very interesting, I looked up more on Uber's motivation and found this: http://fortune.com/2015/05/08/why-uber-would-spend-3-billion-on-maps/?utm_content=buffer67f24&utm_medium=social&utm_source=twitter.com&utm_campaign=buffer

Uber's recent moves into shipping packages rather than peoplesignal it's interested in becoming more of a full-on logistics company, akin more to UPS  UPS 0.72% than your local yellow cab service. For Uber, having its own mapping unit would reduce its dependence on another company — Google — while it continues to evolve.

There's another factor at play here, too. Uber executives haven't been shy about their fondness for driverless cars; the company is partnering with Carnegie Mellon University to work on the technology. After all, robots don't strike for higher wages, nor do they assault passengers.

Driverless cars need two things to work. The first is on-car sensors, which constantly monitor for changing road conditions that require an immediate response, like pedestrians and stop signs. The second is maps, which tell the car where to go on a bigger scale. For driverless cars to be feasible, the maps that power them have to be updated constantly. Imagine a driverless car doesn't know that construction means a bridge is out, for instance: Dead end. Acquiring HERE, then, would help Uber more quickly realize afuture where driverless cars get us all from A to B without us batting an eyelash.