Recent research suggests the fourth quarter could be big for tablet makers.

Businesses and consumers have adopted tablets in droves since Apple introduced the iPad in 2010. More than half of online US consumers say they already own a tablet, but the intent to purchase tablets remains high. In other words, there's still room for growth in an industry that many see as close to maturity.

The Consumer Electronics Association released data Thursday suggesting the fourth quarter could be a big one for tablet makers. "Tablet purchase intent remains a positive indicator that the overall market is interested in tablets," said the CEA. "Many consumers seem to be waiting to replace their existing devices until the next wave of models arrives this holiday season, while non-owners are still debating whether to buy."

CEA's data shows that 54% of connected Americans own tablets -- a 4% increase since January. Further, the intent to purchase tablets "soon" jumped nine percentage points, to 62% during the same period. The CEA does admit, however, that tablet growth has slowed in recent quarters. Three-quarters of consumers said recently they intend to purchase a tablet at some point in the future, which is down 2% from January.

"While interest in tablets remains high, increased competition from large-screen smartphones is having a substantial effect on the US tablet market, since consumers now have more screen size choices than ever," said Kevin Tillmann, senior research analyst at CEA. This conclusion is corroborated by findings made by NPD DisplaySearch, Accenture, and IDC earlier this year.

In July, NPD DisplaySearch suggested increasing sales of large-screened phones are partly responsible for the year-over-year decline in tablet shipments. Oversized smartphones, such as the Samsung Galaxy Note 3 and Nokia Lumia 1520, are more appealing to many consumers than small tablets. Accenture's data suggests tablet buyers maximize when it comes to screen size. A survey it conducted earlier this year discovered 72% of potential tablet buyers would prefer a full-sized tablet, while only 20% would prefer a smaller tablet. 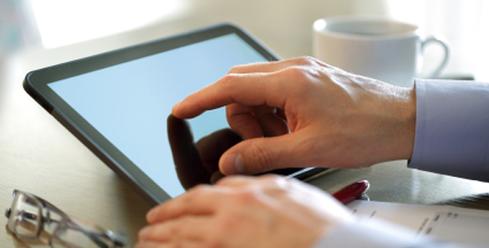 Replacement cycles also play a role in the slowdown of tablet shipments. Smartphones may be replaced fairly often, but consumers hold onto tablets much longer; the replacement cycle for tablets is closer to that of laptops than smartphones. Existing tablet owners are less likely to upgrade until something really special comes along.

Is anything special in the tablet pipeline? Apple is expected to debut a second-generation iPad Air, though there's been little talk about an improved iPad Mini. Microsoft could show off new Surface tablets, and Google is said to be preparing new Nexus- or Silver-branded Android tablets. These are what the CEA believes will impact the tablet market during the fourth quarter.

For the past months we saw reports that tablet adoption is going down because people realized that these toys are not suitable for productive work, but only do well for content consumption that requires minimal user input.

It seems that once again the "analysts" either cannot make up their minds or just spout out based on who paid them last.
Reply  |  Post Message  |  Messages List  |  Start a Board

That's what I was talking about. If IDC et al decide to count all the small Windows tablets, Android tablets, iPads, and so on as a single category, then sure, tablet numbers will be up purely because the category's definition has expanded to include more devices. But for iPads proper, I don't see near the demand for iPads as I do iPhones, and given the people who own Apple devices tend to own other Apple devices, I think the latter demand has to be enroaching on the former. With the holidays, Apple will sell tons of tablets, but the iPhone 6 phablet will be Apple's most popular "tablet."
Reply  |  Post Message  |  Messages List  |  Start a Board

>The Consumer Electronics Association released data Thursday suggesting the fourth quarter could be a big one for tablet makers.

It's almost as if the Consumer Electronics Association has found a correlation between the end of the year and spending.

While the iPhone is allegedly getting a big upgrade, the iPad rumors are pretty muted-- a bump in RAM for the Air, and not much news for the Mini. Maybe the bump in RAM will help the Air accommodate the rumored split-screen mode? Then again, if Apple has a big iPad innovation coming up, it might be better to save it until early next year, when it will allegedly introduce a bigger iPad. iPhone sales this fall and winter are going to be gigantic, way bigger than in the past, and if Apple were to introduce iPads concurrently, iPhone demand would at least somewhat deflate interest in new iPads. Apple would still sell millions of iPads, but I bet year-over-year comparisons won't look great. Four of five months later, though, flexible income opens up again, and even without a holiday, if Apple has something cool, it could have a big quarter. Competitors are waiting for Broadwell chips, or playing race-to-the-bottom pricing games, so I don't necessarily see urgency for Apple in that regard. But anyhow, unless Apple enters a new products category, the iPhone is gonna be its big story of the fall. Between subscription cycles and interest in bigger phones, conditions are right for a giant quarter.