By entering the drone business in a joint venture with Aerosense, Sony aims to expand its involvement with cloud services and the Internet of Things.

Sony Mobile and ZMP, a Japanese robotics company, are planning to work together to develop drones for businesses.

Sony said Aerosense reflects its effort to develop new business opportunities, particularly those related to the Internet of Things. The company said it intends to add value for its customers by developing and managing cloud services related to its drone-based data gathering. 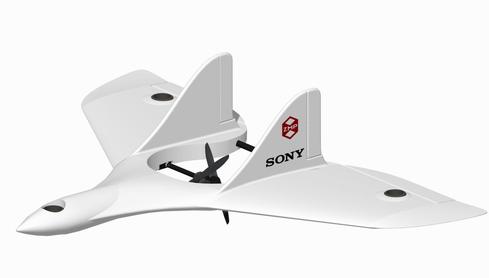 Aerial image acquisition was the first commercial job for drones. The first FAA-approved commercial drone flight over the US was conducted in Alaska last June on behalf of energy services company BP. Then in September the FAA granted six movie production companies the right to fly drones for aerial cinematography.

But drones are also being looked at for the transport of goods and signals. Amazon, Facebook, and Google have been testing drones as delivery vehicles and network signal relays. Last week, the Mid-Atlantic Aviation Partnership and Virginia Tech conducted a FAA-authorized test to deliver medicine via drone. And there have been numerous reports of drones being used to fly contraband across borders and into restricted areas such as prisons.

The next frontier for drones is drone countermeasures. In response to the growing list of unauthorized or unwanted drone incursions, a California lawmaker introduced legislation to allow first responders to down drones. The US Army's Extended Area Protection and Survivability program, or EAPS, has been expanded to cover shooting down small aircraft. In France, UK-based Blighter Surveillance Systems recently tested its anti-drone radar system. And Washington, DC-based DroneShield has been selling net launchers that can capture nearby drones.

Drones pose a problem for regulators because these vehicles have challenged some basic assumptions about aviation. Until a few years ago, most commercial aviation was expensive because planes had to be big enough to carry people. Cost and size limited the number of planes in the national airspace.

Thanks to advances in miniaturization, computation, networking, and other technologies, unmanned aerial vehicles have become inexpensive and widely available. Having more drones aloft raises the risk of collisions with aircraft and with people or property on the ground. The malicious potential of drones as autonomous weapons further complicates matters for companies, such as Sony, that seek to provide drones for business applications.

The FAA is dealing with commercial drones on a case-by-case basis. The agency is expected to issue revised rules by next summer.

Thomas Claburn has been writing about business and technology since 1996, for publications such as New Architect, PC Computing, InformationWeek, Salon, Wired, and Ziff Davis Smart Business. Before that, he worked in film and television, having earned a not particularly useful ... View Full Bio
We welcome your comments on this topic on our social media channels, or [contact us directly] with questions about the site.
Comment  |
Email This  |
Print  |
RSS
More Insights
Webcasts
Securing and Monitoring Networks in the 'New Normal'
Strategies for Success with Digital Transformation
More Webcasts
White Papers
The Network for Whatever's Next; A CxO Guide
IDC Workbook: Best Practices for Cloud Security
More White Papers
Reports
The State of Threat Detection and Response
The Drive for Shift-Left Performance Testing
More Reports

It's going to be really interested to watch the relationship between drones and the IOT as it develops. The visual cues that a drone can pick up traveling over an area might substitute nicely for, or compete with, the alternate of thousands of independent ground based sensors, the network connecting them and their power sources. Another thing that pops into mind is having them fly around fire-prone areas and collect data that might help to judge where the next trouble spot may emerge.
Reply  |  Post Message  |  Messages List  |  Start a Board

I think rules need to be put in place before next summer. A lot can happen before that and this is an important issue that seeds to be addressed immediately.
Reply  |  Post Message  |  Messages List  |  Start a Board
Editors' Choice
Hot Topics