Demand for iPhone 6 and 6 Plus devices smuggled into China slows dramatically, even as Apple prepares to start selling the devices there.

The Apple iPhone 6 has yet to go on sale officially in China, but that's not stopping smugglers from selling the phones on city streets and in back alleys. Black market sellers looking to make a quick buck, however, may have already exhausted early demand for the device -- which doesn't bode well for Apple.

"The gray market for the new iPhones has already dried up," reports The New York Times. The NYT estimates tens of thousands of iPhone 6 and 6 Plus handsets have been smuggled into China from Australia, Hong Kong, Singapore, and New York City. The black market is essentially flooded. One reseller has been forced to slash street prices from $1,960-$2,450 down to $1,060-$1,436. The iPhones netted wholesalers about $163 per handset, but with so many phones available and demand way down, black market operators may instead lose money on their iPhone stock.

How did the phones get there?

When the iPhone 6 and 6 Plus went on sale in the US on September 19, videographer Casey Neistat cased some of the lines at Apple stores in Manhattan and found a large number of Chinese customers waiting to buy the new devices. He asked them what they intended to do with their new phones, and many suggested the new phones were for themselves or for loved ones.

Neistat didn't believe them. He produced a six-minute video titled "Black Market Takes Over the iPhone 6 Lines" that has earned 2.8 million views so far. The video suggests that most of the Chinese buyers waiting in line to buy iPhones on launch day were there to make some cash by reselling the phones, and that many were there as a result of organized smuggling rings run by the Chinese mafia. (For the record, I'd estimate 90% of the people waiting in line to buy the iPhone 6 and 6 Plus on September 19 where I purchased mine in New Jersey were also Chinese.)

Analysts disagree with Neistat's base assumption that a large criminal organization led to the lines witnessed in big cities on September 19. Linda Sui, an analyst at Strategy Analytics, told TIME, "They need money. Most of them are low-income people." In her view, many Chinese iPhone buyers were there to grab a device and turn it around to someone else who intended to ship it to China and resell it there. "In Chinatown there are small circles, so many people know each other," said Sui. 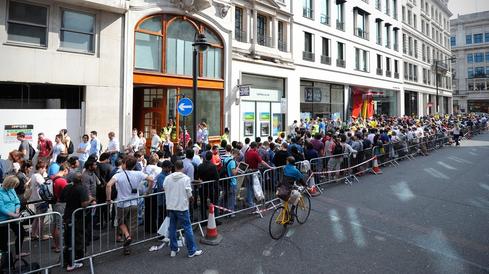 In the US, new iPhones couldn't be resold for more than about $1,000, leaving the original purchaser with a profit of $300 to $400 per device. The buyer then arranged for the phones to make their way to mainland China. Most of the devices entered via Hong Kong, according to the NYT, and were then sent via internal routes to large cities throughout the country.

When the iPhone 5s went on sale last year, it launched in China the same day it launched in other cities around the world. That put a damper on iPhone smugglers. This year, the iPhone's launch in China has been delayed as Apple has secured only one of two needed licenses to sell the device there. The company expects to secure the second license in time to commence sales this week, giving smugglers precious little time to recoup their investment before the phone can be purchased in stores. The slackened demand, however, is troubling.

iPhones were the hot phone to have in China several years ago, but in-country hardware makers have changed that story. Phone manufacturers such as Huawei, Xiaomi, and Meizu have stepped in with competitive handsets that cost far less. Though Apple sells tens of millions of iPhones in China, sales of Android-based phones from Chinese competitors number in the hundreds of millions. It doesn't help that the Chinese government has decreed US-made products undesirable.

Apple hasn't yet said when the iPhone 6 and iPhone 6 Plus will launch in China, but analysts will be watching closely to see just how well Apple does in the world's largest market for mobile phones.

Eric is a freelance writer for InformationWeek specializing in mobile technologies. View Full Bio
We welcome your comments on this topic on our social media channels, or [contact us directly] with questions about the site.
Comment  |
Email This  |
Print  |
RSS
More Insights
Webcasts
The Failures of Static DLP and How to Protect Against Tomorrow's Email Breaches
Strategies for Success with Digital Transformation
More Webcasts
White Papers
How to Prioritize Risk Across the Cyberattack Surface
Passwordless: The Future of Authentication
More White Papers
Reports
The ROI Of SD-WAN: Not Just A Numbers Game
DNS Network Traffic Volumes During the 2020 Pandemic
More Reports

I think all brands try to do that. It's just difficult to succeed at it.
Reply  |  Post Message  |  Messages List  |  Start a Board

Li Tan, ohh. $160k is quite a big amount. I am sure he must have invested this money without analyzing the features of iphone 6 and the market competition in hand in China.
Reply  |  Post Message  |  Messages List  |  Start a Board

:) Yesterday I had a heated discussion with a friend on how many years it will take when Samsung bypasses Apple's popularity without any doubt. The common point we both made, with me being a Samsung fan and he being an Apple fan, that if iTunes etc. are done away with, that time might get delayed ahead.
Reply  |  Post Message  |  Messages List  |  Start a Board

Plus, you could just get a bootleg fake iPhone for much cheaper in China -- even from a bootleg/fake Apple Store!  ;)
Reply  |  Post Message  |  Messages List  |  Start a Board

I wonder whether the chinese government is doing more to curve iphone black market sales.  I think Apple's strategy to release their products at the same time all over the world helps to reduce such efforts.  does anything think that public education or more policy government would work to reduce such sales in the future.
Reply  |  Post Message  |  Messages List  |  Start a Board

The first reports about pre-sales in China indicate more than 2 million iPhone 6 and 6 Plus reservations in the first six hours. And people are buying the more expensive configurations, not the 16 GB entry models. Seems like demand is pretty healthy. Perhaps people realized they could just wait a few weeks and avoid the black market surcharge.
Reply  |  Post Message  |  Messages List  |  Start a Board

You are quite right, my friend. Here in Beijing the price of iPhone 6 decreased drastically in the past 2 week. It's indeed a bad season for smugglers. I heard a story that one guy purchased a lot of iPhone 6 in order to earn a big amount of money. But in one week he suffered about 160K USD loss...sounds awful and threatening...
Reply  |  Post Message  |  Messages List  |  Start a Board

Really? Wow, I did not know that, thanks for the info. And it actually works?!
Reply  |  Post Message  |  Messages List  |  Start a Board

@Lorna,  You don't need iTunes on an android device. You can port your library over to Google music.  https://play.google.com/about/music/unlock/
Reply  |  Post Message  |  Messages List  |  Start a Board

@Wagas, I think Google is trying to make Android sticky by tightly tying it to the Google docs/Gmail/other Google services ecosystem. But of course, one could use Gmail from an iPhone, while pigs will fly before you can listen to your iTunes library on a Samsung or HTC device!!
Reply  |  Post Message  |  Messages List  |  Start a Board
Page 1 / 4   >   >>
Editors' Choice
Hot Topics

10 IT Trends to Watch for in 2021 Cynthia Harvey, Freelance Journalist, InformationWeek,  12/22/2020
White Papers
How to Prioritize Risk Across the Cyberattack Surface
Passwordless: The Future of Authentication
The 2020 Duo Security Trusted Access Report
The 2020 Duo Security Trusted Access Report
Managing OTT Content Distribution in the Connected World