50%
Tweet
Would you wear a ring that can answer calls and tell the time? One Indiegogo campaign hopes so.

Not sold on smartwatches? How about a smart ring?

The Smarty Ring promises to do almost everything a smartwatch can do, but in a much smaller package. The Indiegogo concept, which has already met its funding goal, will pair with smartphones via Bluetooth and includes a wide range of notifications and controls.

Made from surgical stainless steel, the ring is 13 mm wide and 4 mm thick. The device is waterproof and charges via magnetic induction. The 22 mAh battery provides about 24 hours of battery life, meaning it will need to be charged every day. Considering its size, that's nothing to complain about. The Smarty Ring includes a monochrome LED screen that is bright enough for outdoor use. It displays the time and can also be used as a stopwatch or timer.

Beyond the basics, the Smarty Watch can be used for notifications, including incoming and outgoing calls, alerts for text and email messages, and real-time updates from Facebook, Twitter, Hangouts, and Skype. 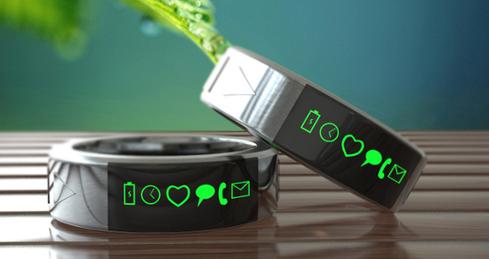 The Smarty Ring can also be used to control a number of smartphone functions, using built-in buttons that let it interact with the notifications and perform set actions. For example, it can accept or reject incoming calls, make outgoing calls to preset numbers, trigger the camera, control music playback, and change the user's profile.

[Is Samsung's Galaxy Round ahead of the curve -- or a wrong turn? Read Samsung's Curved Smartphone Falls Flat.]

According to the developers, the Smarty Ring can be used to track your smartphone, alerting you when your phone is more than 30 meters away. This can prevent Smarty Ring wearers from forgetting their devices and could possibly even prevent thefts. A wearer can also use the ring to find his or her phone by sending an alert, even if the phone is set to silent mode.

The Smarty Ring is compatible with Android smartphones and the iPhone, as long as the phone has Bluetooth 4.0 on board. There's a dedicated application that will let smartphone owners set up and control the functions of the Smarty Ring. For example, the app will let users set time zones and adjust the clock, adjust the LED brightness, adjust the beeper volume, and assign buttons to control speed-dial numbers.

All these features are found on most of today's smartwatches, such as the Galaxy Gear from Samsung, the Pebble, and the Smart Watch 2 from Sony. Putting them in a smaller package might appeal to some users.

The developers have reached their initial funding goal but are still accepting investors. The basic Smarty Ring costs $100, but the $175 option offers the best value, as it includes more features. The developers of the Smarty Ring are targeting a delivery date of April 2014.

It's an ambitious project, and whether or not it will appeal to tech-savvy users is a big question. The Smarty Ring pushes the envelope in terms of exactly what defines a wearable device and what we expect it to do. What do you think? Would you wear a smart ring instead of a smartwatch?

Here's something that could interest me -- I hate pulling out my phone when traveling to check messages, just to make sure there's not a key message from a colleague I need to answer. Maybe this could alert me to just coworker messages. Moot point, because I'm too cheap to buy either a smart ring or smart watch, but still there's something in this level of minuterization I find more intriguing than a smartwatch.
Reply  |  Post Message  |  Messages List  |  Start a Board

4mm is too thick for a ring to be worn comfortably all day every day. This will flop unless the thickness gets down below 3mm, closer to 2 for good reviews. I wish them luck though, because it would be a really cool device.
Reply  |  Post Message  |  Messages List  |  Start a Board

I once thought my Bluetooth device for connecting my phone to car's radio system, was this great idea: convenient, hands free technology that extended the reach and capability of my phone.  Well, the reality is, I don't bother to use it much anymore. It's just easier to pick up my phone.  Wonder why a ring would make life easier.
Reply  |  Post Message  |  Messages List  |  Start a Board

Here's a good test of the utility, or lack thereof, of a wearable device. Substitute the words "smart human" for the object in question...

"The [smart human] can also be used to control a number of smartphone functions, using built-in buttons that let it interact with the notifications and perform set actions. For example, [the smart human] can accept or reject incoming calls, make outgoing calls to preset numbers, trigger the camera, control music playback, and change the user's profile."

If that seems perfectly reasonable, you're probably better off handling that task with your smart brain.
Reply  |  Post Message  |  Messages List  |  Start a Board

This seems like a solution in search of a problem. Why is a ring harder to lose than a phone? People take off rings and leave them on sinks all the time. They fly off at the beach, etc.
Reply  |  Post Message  |  Messages List  |  Start a Board

I get that wearable tech is hot right now, but I'm still not convinced many of these products will appeal to the masses (this one included). Pulling out my phone from my pocket or purse doesn't require that much effort, so I can't imagine investing in a ring (that I'd probably lose) to do much of the same thing.
Reply  |  Post Message  |  Messages List  |  Start a Board
Editors' Choice
Hot Topics