Samsung revealed two tablets, the Galaxy Tab S brand, at a special event in New York on Thursday. The devices share most features and differ only in size: One has an 8.4-inch screen and the other a 10.5-inch screen. Samsung imbued each with a classy design and signed up a bevy of partners for exclusive content. Throughout the presentation Samsung pitched its tablets as the superior choice to that other high-end tablet in the market.

Samsung already has a line of high-end tablets in the market, the NotePRO. The easiest way to think of these two lines of tablets is to compare them to Samsung's smartphones. The NotePRO is to the Galaxy Note 3 (think S Pen) as the Tab S is to the Galaxy S5. You could also think of the Tab S as a gigantic Galaxy S5, given how many of the S5's design characteristics were carried over to the tablets.

Samsung spent most of its presentation explaining why the tablets' screens are superior. Both the 8.4-inch and 10.5-inch models feature screen resolution of 2560 x 1600. This gives them a 16:10 aspect ratio, which breaks a bit from the more popular 16:9 aspect ratio. Also, they use Super AMOLED technology, as opposed to the iPad's LCD technology. Samsung gave the screens the ability to adapt to ambient lighting conditions; they can change white balance, brightness, and contrast on the fly so users always have the best possible experience. Samsung made sure the display works well outdoors.

The displays play a role in several other aspects of the Tab S. Super AMOLED technology isn't as power-hungry as LCD technology since it doesn't use a backlight. This translates to incredible battery life, which according to Samsung delivers 11 hours of HD video playback. Further, Super AMOLED uses fewer layers of materials, which allowed Samsung to slim the Tab S down a mere 6.6-mm thick. The 10-inch model weighs 1.02 pounds and the 8-inch model weighs 0.65 pounds. 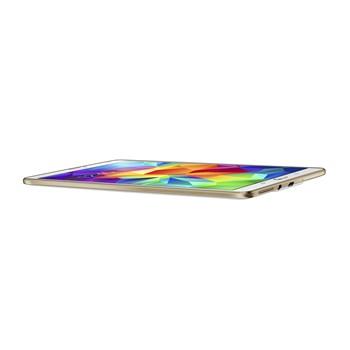 Beyond the screen, the Tab S offers just about all the specifications and features consumers expect from high-end tablets. The devices will ship in WiFi and LTE variants. The WiFi versions will be powered by Samsung's own Exynos 5 Octa processor, while the LTE versions will feature Qualcomm's Snapdragon 800 processor. Both the Wi-Fi and LTE variants

Being able to adjust so that one can still read the screen outside in bright sunlight could make this a real replacement for a dedicated e-reader. Eric, did you see that in action? Wonder if it will kill the battery life.
Reply  |  Post Message  |  Messages List  |  Start a Board
InformationWeek Is Getting an Upgrade!