The "botlr" -- a robotic butler -- will deliver small goods to hotel guests upon request.

The technocentric hotel group (the art above guests' beds depicts a circuit board) is also testing the flexibility of English and the patience of copy editors by calling its robot a "Botlr," a word which here means "robot butler" rather than "bottler."

A.L.O. is scheduled to report for duty August 20 at the Aloft Hotel in Cupertino, Calif., where it will assist Aloft personnel with the delivery of small items to guests' rooms and the distribution of towels.

Brian McGuinness, global brand leader for Starwood's Specialty Select Brands, said in a statement -- half-serious it seems -- that hiring for the position was a challenge because the company wanted someone who could work around the clock.

[Worry that robots are taking over the world? See Robot Vs. Human Smackdown.]

Steve Cousins, CEO of Savioke, the company that designed A.L.O. (which is called SaviOne by the company), said in a phone interview that the hope is A.L.O. will free human employees from time-consuming, mundane tasks so they can serve guests more creatively.

"It's a way to empower the staff to take on a bit more," said Cousins. "It allows the desk staff to multitask." 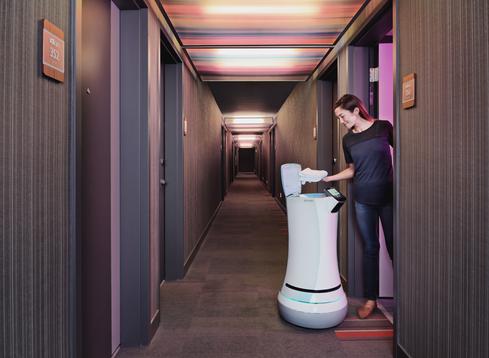 If all goes well, more bots will follow in coming months, at the Aloft in Cupertino and other locations. That would be consistent with predictions: According to a study last year by researchers at the University of Oxford, the probability that baggage porters and bellhops will see their jobs automated is estimated to be 83%.

Cousins, however, insists the hotel's staff does not see A.L.O. as a threat to their jobs. "They describe it as cute," he said, adding "It's not out there to replace people. It's there to help them. The more we work on robots, the more appreciation we have of what fantastic and wonderful creatures people are."

Shrink-wrapped in a multi-hued, collared vinyl uniform -- "aesthetically reminiscent of R2D2," the bot's bio explains -- A.L.O. can navigate through the hotel on its own, at walking speed. It can communicate wirelessly with hotel systems, like the elevator, to help it get around and can move through interior spaces where WiFi and cellular reception drops out. It will alert the front desk if it gets stuck, which isn't supposed to happen very often.

Upon receipt of a request from a guest, hotel staff load the requested item into A.L.O.'s cargo space and direct it to the guest's room through its touch-screen. Cousins said that while it's possible to direct A.L.O. through a Web interface, someone still has to load the items that A.L.O. delivers. Enabling video chat between the front desk and A.L.O. has been considered but hasn't been implemented, he added.

When A.L.O. arrives at the designated room, it calls the phone in the room to alert the guest. The robot's camera detects the opening of the door, presents the requested item, then asks if it has fulfilled the guest's request. It also solicits a rating, from one to five stars, before returning to its charging station to await new orders.

"If you give it a high rating it does a little dance," said Cousins. "Part of this is about delighting the guest."

That's also why A.L.O. doesn't interact through voice commands: good speech recognition is hard and can easily frustrate people. "The challenge with voice recognition is when you start speaking to people, you set up expectations of intelligence," said Cousins, who added that the problem is compounded by the difficulty of capturing voice commands accurately in an open space with multiple potential sound sources.

A.L.O. has been programmed to interpret tweets of its hashtag, #MeetBotlr, as a tip, though that probably isn't the sort of tip sharing the human staff expects.

Thomas Claburn has been writing about business and technology since 1996, for publications such as New Architect, PC Computing, InformationWeek, Salon, Wired, and Ziff Davis Smart Business. Before that, he worked in film and television, having earned a not particularly useful ... View Full Bio
We welcome your comments on this topic on our social media channels, or [contact us directly] with questions about the site.
Comment  |
Email This  |
Print  |
RSS
More Insights
Webcasts
Protecting Your Enterprise's Intellectual Property
Building the SOC of the Future: Next-Generation Security Operations
More Webcasts
White Papers
How to Prioritize Risk Across the Cyberattack Surface
Seven recommendations for a Successful SD-WAN Strategy
More White Papers
Reports
2021 Top Enterprise IT Trends
How IT Security Organizations are Attacking the Cybersecurity Problem
More Reports

I'm not going to pick on anyone who can't figure out a self-checkout scanner but I think a large part of the problem is comfort with that process.  I have no problem with them, even my kids can use them with high success rates.  There are people though that will be frustrated that things are not being done for them and any error is going to get hard for them to get over.  I think the longer the self service parts are there and the more people interact with them we'll see that need for human interaction drop.  Think about ATMs and pay at the pump gas stations.  I haven't gone into a gas station to pay for years.
Reply  |  Post Message  |  Messages List  |  Start a Board

"I even take a moment to write a nice note for the housekeeper with my daily tip thanking her/him for the day's service."

@susanf, @Angelfuego: I do try to interact with all service people at hotels, they can be really valuable sources of information about the local area and are typically delighted to be spoken to as fellow humans rather than treated as invisible service genies. I even take a moment to write a nice note for the housekeeper with my daily tip thanking her/him for the day's service.
Reply  |  Post Message  |  Messages List  |  Start a Board

@SaneIT: Having tried self-checkout at many supermarkets and always always seen someone require human intervention, and witnessed people completely flummoxed at transit pass vending machines, I can attest that human interaction is still needed for even the most basic transactions. I fear we may be giving humans more credit than we deserve at this point -- the weak link in human/machine interaction may not be the machines...
Reply  |  Post Message  |  Messages List  |  Start a Board

@Whoopty: while the geek in me loves the idea of having a robot deliver room servce, the human in me despairs for what this will mean to folks who have relied on these kinds of jobs in order to earn a living. The latter wins in my view, so I'd much rather see humans delivering room service. Then again, since most hotels charge a ridiculous amount for room service ($13 bagels, anyone?) I rarely order it anyway, so I'm not really helping am i?
Reply  |  Post Message  |  Messages List  |  Start a Board

That's a really good point and an important one, as technological capabilities improve and organizations look for new ways to cut costs. Part of the fun of travel is meeting new people, not necessarily robots, and the one-time novelty might be fun but wouldn't you rather have a short, pleasant relationship with hotel staff? Having just returned from vacation at a hotel we visit often, i enjoy seeing the same faces behind the front desk and in the coffee room. Not sure a robot would generate that feeling.
Reply  |  Post Message  |  Messages List  |  Start a Board

I think you fall into the opinion that most people will have.  Transactional experiences may as well be machine based for us because quite often we're not looking for a bond with the person on the other side of the counter.  The medical part I can understand, things get personal when needles are coming at you but I guess I can turn that off.  I think there will always be a need for humans in the medical fields though because I don't think anyone wants a machine telling them they have 2 months to live after a cancer diagnosis for example.  There are some areas where we need a softer touch.
Reply  |  Post Message  |  Messages List  |  Start a Board

"I think it is impersonal and is another step in making us lack in the skill of interpersonal skills on a face to face basis."

I doubt anyone interacts too much with the person who delivers clean towels to their room. There is no interaction, or face to face anything with them.

If I lived in Cupertino I would pay a visit to the Aloft Hotel just to see A.L.O. in action.

"If you give it a high rating it does a little dance," said Cousins. "Part of this is about delighting the guest."

No doubt about it. I can just imagine how adorable A.L.O. would look doing a little dance. :D

In the future, having a model with arms could allow A.L.O. to load the items into its cargo space itself, becoming more independent from hotel staff. Allowing video chat between A.L.O. and the front desk would be a good add, too, something like the robots in healthcare already do when visiting patients allowing them to speak with their doctor through video chat.

The idea of implementing a service robot in the hotel chain is good. The unit chosen seems to be quite basic, though probably enough for what it is expected to do.

I'm with SaneIT. I don't need the human touch when I'm processing and verifying information -- hotel check in, food pick up etc. These are rarely meaningful exchanges so automating parts of the service industry doesn't feel dehumanizing to me. That said, I'm never letting a robot put a needle in my arm. I don't even want a human putting a needle in my arm, but if it's got be done I want human.
Reply  |  Post Message  |  Messages List  |  Start a Board
Page 1 / 3   >   >>
Editors' Choice
Hot Topics