As it prepares for independence from eBay, PayPal is trying to redefine itself as something more than a payment company.

20 Great Ideas To Steal In 2015
(Click image for larger view and slideshow.)

Later this year, PayPal will spin off as a public company separate from its mothership, eBay, which acquired the payment company in 2002. As it prepares for life without a corporate parent, PayPal faces growing competition from rival payment services.

Alibaba, Amazon, Apple, Facebook, Google, Square, and Stripe, alongside more than a thousand other startups, aspire to be the next PayPal. But the first PayPal plans to continuing growing beyond the $8 billion in revenue it generated in 2014.

The financial services industry is about to embark on a period of rapid change driven by technology -- the proliferation of mobile devices and the power of software to alter business models, said Dan Schulman, PayPal president and designated CEO upon independence, at a PayPal media event in San Francisco Thursday.

Citing Moore's Law and the mobile revolution, Schulman described the impact of technological change on the financial services industry as a "digital tornado."

"We're coming into the market at a time when the financial services industry is going through some really fundamental shifts," said Schulman, asserting that PayPal is "very well positioned to be a leading player in that transformation." 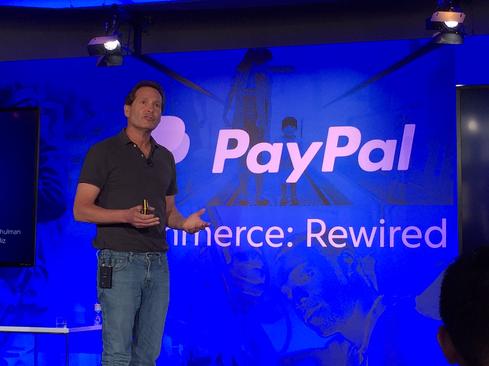 To reach that position, PayPal has spent the past few years modernizing its IT infrastructure. It used to take months to make changes to PayPal's platform, said Schulman. Now that PayPal has embraced service-oriented architecture and agile development, changes take hours, new feature releases come every two weeks, and each element of its platform has an associated API and software development kit (SDK).

PayPal is trying to reimagine itself as something more than a payment platform. PayPal now sees itself as a partner enabling other payment services. As one of slides at the company's presentation declared, PayPal's "Next Chapter" is as "the operating system for digital commerce."

"We want to be more than just a button on a merchant's website," said Schulman. "We really want to provide a full suite of products and services and experiences off of our digital payments platform both to consumer and merchants."

PayPal has already gone beyond being a button on a website. It's a payment platform, a payment gateway, a payment processor, a digital wallet, a credit provider, and a source of financial data.

Thanks to its 2013 acquisition of BrainTree, a payment gateway that allows businesses to accept a variety of payment systems through the Web and apps, PayPal can still get paid if consumers prefer to pay using an app that implements Apple Pay through BrainTree's SDK, for example, instead of PayPal.

PayPal's acquisition earlier this year of Paydiant, a technology platform for retailers, also supports its broader ambition as an enabler for multiple payment mechanisms. "Operating system" may be overstating the case, but PayPal can credibly claim to be an ecosystem.

One announcement made at the event – the extension of PayPal's OneTouch for web and mobile to merchants using BigCommerce's online store technology – demonstrates how PayPal is looking beyond transaction fees. OneTouch allows shoppers at online stores built with BigCommerce technology to buy items with a single touch after their credentials have been entered once, via website or mobile device, all without the PayPal app. It's an effort to improve transactions in general rather than an effort to advance PayPal as a specific payment system.

"What we aspire to be is a true customer champion for consumers and for merchants," said Schulman.

Thomas Claburn has been writing about business and technology since 1996, for publications such as New Architect, PC Computing, InformationWeek, Salon, Wired, and Ziff Davis Smart Business. Before that, he worked in film and television, having earned a not particularly useful ... View Full Bio
We welcome your comments on this topic on our social media channels, or [contact us directly] with questions about the site.
Comment  |
Email This  |
Print  |
RSS
More Insights
Webcasts
Defense and Response Against Insider Threats & User Errors
The Pesky Password Problem: Policies That Help You Gain the Upper Hand on the Bad Guys
More Webcasts
White Papers
Why Chatbots Are So Popular Right Now
Fact-Check Your Ransomware Assumptions
More White Papers
Reports
2021 Top Enterprise IT Trends
The Drive for Shift-Left Performance Testing
More Reports

Oh good, now in addition to the numerous phishing attempts being emailed to my PP account, consumers can look forward to even more financial institution hacking as well once PP embarks into the financial sector.
Reply  |  Post Message  |  Messages List  |  Start a Board

"We really want to provide a full suite of products and services and experiences off of our digital payments platform both to consumer and merchants."

For someone who has using PayPal for many, many years. I'm just glad for them, and of course, for the consumers as well. And I agree, "Operating System" is stretching it a little bit.
Reply  |  Post Message  |  Messages List  |  Start a Board

Having done several dozen various API integrations, I have found that the condition of a company's APIs almost always mirrors the general internal state of that company. Twilio for example: Clean and easy to use APIs, well designed. Turns out that Twilio is quite easy to deal with, top notch service.

PayPal's API's and services are disasterous. They have many 'products' with very similar names, that I honestly can't tell the difference between. After weeks of wrestling with various versions of APIs, and much contact with their 'support', it turns out that we were using the wrong API the whole time, that is why it wasn't working properly. We were using the API they told us to use!

I don't see PayPal as being evil so much as incompetent, and they have been that way for well over a decade. They want to talk about innovation and adding features, that's insane. They stuff they have now doesn't even work right. Clean up your mess first PayPal, get your 'products' in somewhat resonable condition.
Reply  |  Post Message  |  Messages List  |  Start a Board

Nobody can tell me that "the check is in the mail", because PayPal is as close to instantaneous that it doesn't matter. I just hope that this doesn't change.
Reply  |  Post Message  |  Messages List  |  Start a Board

PayPal and others will rule our world when the digital commerce (e-business and e-commerce) will surpass the brick-and-mortar commerce. When e-tailing exceeds in value than retailing.

That will be the time when it would make sense to get our incomes and keep our savings with services like PayPal & Stripe instead of JPMorgan. That financial tipping point is near. Not far.

I think it's great PayPal is seeing a new day where it is on its own apart from eBay. I still hold hope that the company is able to compete with Stripe as an easy payment mechanism on the internet. The fact that PayPal owns Venmo and potential to monetize it I think is really compelling.
Reply  |  Post Message  |  Messages List  |  Start a Board

Yes, Tom, PayPal has a good shot at making it work as an independent company. It's concentrating on mobile transactions with less friction or zero friction to them, such as a consumer's smart phone's establishing its owner's credentials as it comes within range of a store's beacon, then a picture of the consumer flashed on a screen at the cash register for a visual-only confirmation of a purchase. No cash or cards changing hands.
Reply  |  Post Message  |  Messages List  |  Start a Board
Editors' Choice
Hot Topics