The European Parliament on Tuesday voted to adopt net neutrality rules that allow data discrimination. As European Parliament press office puts it, "The new law will oblige firms offering Internet access to treat all traffic equally," even as network operators "will nonetheless be able to offer specialized services...on condition that this does not have an impact on general Internet quality."

Diverging from the more comprehensive net neutrality rules adopted by the US Federal Communications Commission in February, Europe's rules will allow service providers to offer Internet fast lanes for a fee.

The European Parliament insists it is not promoting Internet fast lanes or unequal treatment of data traffic. It makes this assertion by defining "specialized services" as something distinct from the open Internet, a line of argument that echoes the now discredited "separate but equal" legal doctrine used to justify racial discrimination in the US.

All Internet traffic will be treated equally, except when it isn't. 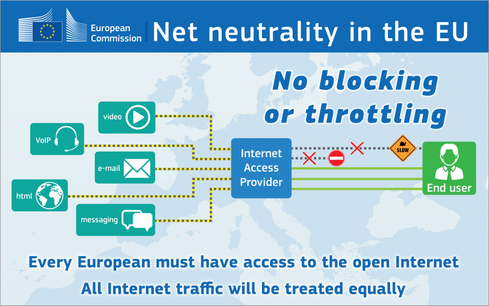 Anne Jellema, CEO of the Web Foundation, the nonprofit created by World Wide Web creator Tim Berners-Lee, criticized the European Parliament vote in a blog post. "Now, European start-ups may have to compete on an uneven playing field against industry titans, while small civil society groups risk having their voices overwhelmed by well-funded giants," she said.

According to Berners-Lee, the rules also allow ISPs to define classes of service, such as encrypted traffic, and to set the speed available to such classes. They also allow ISPs to modify traffic speeds to prevent "impending" congestion, a term so ill-defined that it amounts to discretionary data throttling.

The new net neutrality rules are part of the Telecoms Single Market package, which ends mobile network roaming charges, at least in part, by June 2017. Members of parliament had the chance to adopt amendments that would have closed the net neutrality loopholes but they failed to do so.

Marietje Schaake, a Member of the European Parliament from the Netherlands, with the Alliance of Liberals and Democrats for Europe Party, called the vote "a missed opportunity" to implement stronger net neutrality laws.

Jellema says that EU regulators, national regulators, and the courts will now face the challenge of heeding the citizens' concerns about Internet fairness as they try to interpret the vague rules.

Though the FCC adopted strong net neutrality rules for the US in February, the fight isn't over. USTelecom in April filed a complaint in the U.S. Court of Appeals for the District of Columbia that challenges the FCC's reclassification of broadband Internet access as a public utility. Arguments are scheduled to be heard in December.

Thomas Claburn has been writing about business and technology since 1996, for publications such as New Architect, PC Computing, InformationWeek, Salon, Wired, and Ziff Davis Smart Business. Before that, he worked in film and television, having earned a not particularly useful ... View Full Bio
We welcome your comments on this topic on our social media channels, or [contact us directly] with questions about the site.
Comment  |
Email This  |
Print  |
RSS
More Insights
Webcasts
How Elite Analyst Teams are Transforming Security with Cyber Reconnaissance
Strategies for Success with Digital Transformation
More Webcasts
White Papers
The Trouble with Phishing
Passwordless: The Future of Authentication
More White Papers
Reports
2021 Top Enterprise IT Trends
How Data Breaches Affect the Enterprise (2020)
More Reports

You make a point. With little choice in providers, there is an effective monopoly in many areas of the country. You only have the options they give you. If the U.S. ever decides to go more in this direction it could be disasterous for consumers who would be forced to pay more to get decent service. I've seen throttling in action when somehow we went over our 'allotted' bandwidth. Around the same time we did everything coming in was exceptionally slow and spotty. As soon as the month rolled over, fast reliable service. Don't think that was a coincidence. Now for the EU companies could get gouged just to get a decent bandwidth for their message. Hopefully they will realize this is not the best solution before it becomes a new normal.
Reply  |  Post Message  |  Messages List  |  Start a Board

Although I am sympathetic to the cause of Net Neutrality, what I am more concerned about are the choices of internet access.  Being one of the earlier adapters of DSL, I've been paying double the price for 1/4 download speed now comparing with the speed over a decade ago.  With my only other internet access option being Comcast, there isn't really any option around.  If there were choices and some ISPs decide to provide inferior services regarding Net Neutrality, they would not be in business and other newer and better ISPs would take their place.

In Europe, this scenario is possible simply because the "last mile" of internet access are built as part of public infrastruture, where ISPs compete and provide superior services to customers.  In US, companies like AT&T and Comcast are replied upon to provide the infrastructures and have little incentives to allow competitions like Google Fiber, while racking up record profits with localized monoplies.  Not maintaining an absolute Net Neutrality in Europe might be a concern for the purists, but as long as the infrastruture stays public and the ISP competitions stay fierce, there is not much for European citizens to worry.
Reply  |  Post Message  |  Messages List  |  Start a Board

It seems the vote was not a bad thing. Nonetheless, the title seems to say otherwise. I'm confused.
Reply  |  Post Message  |  Messages List  |  Start a Board

It sometimes seems as if the Europeans need to do something different from what the U.S. does, just to ensure that there's no confusion over whether they're just followers. They are quite against genetically modified foods, which I can understand for health reasons -- less of an issue here. But they are much more tolerant of smoking, which I do not understand, for health reasons -- not tolerated here. So of course allowing data fast lanes distinguishes them from the approach taken in the U.S. but in the past I felt Europeans were stronger believers in level playing fields and everyone following the same standards. Now there's retrenchment from that. It's puzzling.
Reply  |  Post Message  |  Messages List  |  Start a Board
Editors' Choice
Hot Topics