Motorola follows up discounts on the smartphone with a free Google Chromecast for new buyers.

Motorola hasn't shared any data about how many Moto X handsets it has sold, but the phone must not be meeting internal expectations. Motorola's wireless network operator partners, and even Motorola itself, have discounted the phone heavily, hoping to entice more sales.

When the Moto X debuted in stores in September, the full retail price was $600. Network operators were charging $200 for the 16 GB model and $250 for the 32 GB model for those willing to sign contracts. Phones are often discounted once they are about six months old. Phones that are discounted at the three-month mark, however, are probably selling poorly. If carriers discount the price in the first month, the phone is likely going to bomb. The Moto X isn't bombing, but it certainly isn't performing as Motorola hoped.

All three carriers that offer the Moto X -- AT&T, Sprint, and T-Mobile -- have dropped the Moto X's price. AT&T and Sprint are selling the 16 GB version for $99, while Verizon is practically giving it away for $49.

In addition to offering the Moto X through its carrier partners, Motorola also sells the phone directly from its website. At the start of the new year, Motorola dropped the off-contract price significantly, down to $400 for the 16 GB model and $450 for the 32 GB model. Those represent discounts of at least $100 from the price at launch.

This week, Motorola added yet another incentive. It is offering a free Chromecast for those who purchase the unlocked $399 Moto X. Google, which owns Motorola, charges $35 for the Chromecast when it is purchased through the Google Play Store. Chromecast is an HDTV accessory that lets smartphone users push content from their phones to their TVs. The free Chromecast offer is good only for a limited time, but there's no denying that is another attempt from Motorola to make the Moto X an attractive purchase. 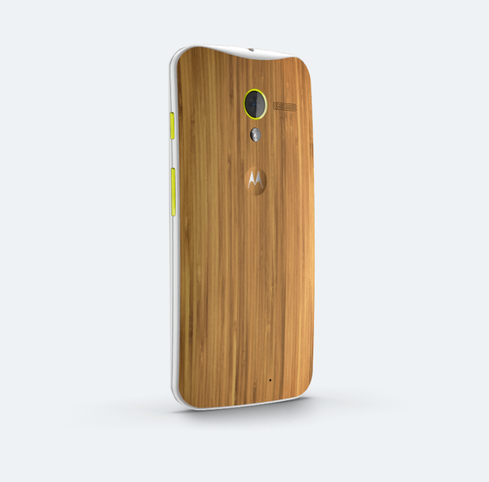 These discounts follow the recent availability of the bamboo-backed version of the Moto X. Customers who choose Moto Maker to design their own versions of the Moto X can select bamboo. The bamboo model costs $500 for the 16 GB model and $550 for the 32 GB model.

One problem faced by the Moto X is its hardware. While it is neat to use Moto Maker to design your own version of the phone, the smaller, lower-resolution screen and mediocre camera don't compare well with competing models from Samsung, HTC, and others. Hardware aside, the Moto X has some of the finest software available on a modern Android smartphone. The Active Display is an excellent notification tool (and battery saver), and the Touchless Control functions of Google Now make the Moto X easy to control through voice commands. Despite all it has going for it, the Moto X isn't popular with the smartphone-buying public. Hopefully for Motorola, the sales and new availability of the wooden model will kickstart interest in the device.