Microsoft may debut an expanded lineup of Surface tablets on May 20 -- including a bigger model. This could be just what Microsoft's tablets need to finally succeed.

Microsoft's May 20 Surface event in New York reportedly will include not only the long-awaited Surface Mini, which is expected use a Qualcomm processor and run Windows RT, but also at least one additional product that uses an Intel chip.

This expanded Surface family, should it appear, could be precisely what Microsoft's struggling device efforts need to get going. Sure, the Surface Mini alone would be a newsworthy play, but what if, as some have speculated, we also see a larger version of the Surface Pro?

If your first thought is, "Poor, doomed Microsoft, taking a failed idea, and making it bigger," let me explain.

For anything but the lightest tasks, I wouldn't recommend the slow-as-molasses $249 Surface RT unless I wanted to sabotage someone. The Surface Pro is much nicer, but its fixed-position kickstand and poor battery life are deal breakers. I give Microsoft credit for the Power Cover, a keyboard accessory that boosts battery life, but $200? Good grief.

Microsoft's second-generation devices are significantly better, built with top-notch components, faster than their predecessors, and, thanks to a two-step kickstand, surprisingly more versatile. But it's easier than it should be to max out the Surface 2, and with a base price of $449, Microsoft should include a keyboard. The Surface Pro 2, meanwhile, refines the original's strengths but retains its biggest flaw: The device is ideal for only a certain breed of on-the-go user. 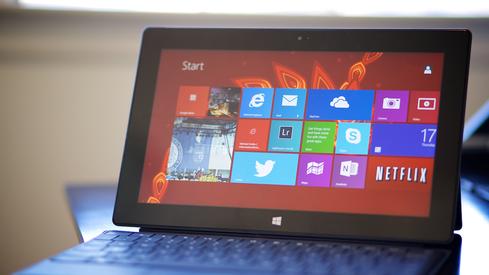 Specifically, if you need a small, light touchscreen device but don't want a pure tablet, and if you need to type but only in limited spurts, a Surface might satisfy your needs. But for almost everyone else, convergence isn't worth the compromise. If you like tablets, iPads and Android tablets offer richer experiences than the Surfaces, which distinguish themselves from other slates mostly by being more like laptops. If you're even a semi-heavy laptop user, you'll want a bigger keyboard and screen than Surfaces provide.

Even Microsoft doesn't know exactly what the Surfaces are. Its Office 365 Personal subscriptions allow you to categorize the Pro as either laptop or tablet. For some -- evidently few -- this flexibility sounds awesome. For the rest of us it's neither fish nor fowl.

That's why an expanded lineup makes sense. Microsoft hinged its original Surface bet on one size, but as the company's continued hardware losses testify, that design doesn't have mass-market appeal. It's fine for Microsoft to include niche products in its offerings, but base an entire product line around them? No, that won't work.

A Surface Mini and a larger Surface Pro would substantially broaden the product family's appeal; convergence would still be there for those who want it, but the line-up would also include a pure tablet play, as well as a performance-oriented machine that genuinely deserves the "Pro" designation.

As for the Surface Mini, don't be surprised if Microsoft offers a high-quality build while still undercutting the $299 non-Retina iPad Mini. Microsoft launched all its previous Surface devices at stubbornly high prices, but that was under retired CEO Steve Ballmer, who seemed determined to compete head-to-head with Apple.

New CEO Satya "Microsoft is an underdog" Nadella is in charge now. With all his talk of holistic strategies, Nadella might position the Surface Mini as a financial loss leader that feeds high-margin properties such as Office 365, and Microsoft Azure.

In a recent interview with Fox Business, Microsoft co-founder Bill Gates alluded to such a strategy. Asked about Surface profitability, he remarked,