Microsoft Gets Snarky With Google Via Swag - InformationWeek

After a year of disparaging Google in ads, Microsoft is taking its "Scroogled" campaign to t-shirts, mugs, hats, and hoodies. The software giant and self-styled privacy defender has begun selling anti-Google swag on its website.

For a mere $8, about what Microsoft gets in patent licensing fees per Android handset sold, Internet shoppers with an animus against Google (or an appreciation of the absurd) can purchase a coffee mug emblazoned with the Chrome logo and the words, "Keep Calm While We Steal Your Data."

Other options include the Scroogled "Spider Web" T-shirt and the Scroogled "I'm Watching You" t-shirt, though the chief appeal of these two items lies in the overwrought item descriptions, which aren't actually printed on either shirt.

The website copy accompanying the spider-themed shirt reads: "Google's the spider. You're the fly. You probably know what happens next." 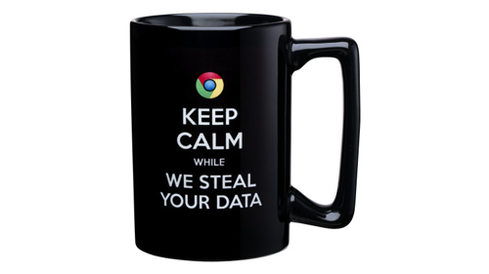 Flight from Google? That's what Microsoft hopes will happen next, but there's not much evidence that the company's ridicule of its rival has translated into new customers. Nine months after savaging Gmail for scanning message content to target ads, Microsoft has attracted 182,067 signatures to its petition to "Tell Google to stop going through your email to sell ads."

If and when the petition reaches 200,000, it appears that Microsoft will send the petition to Google executive chairman Eric Schmidt, a curious choice given that Google cofounder Larry Page has been CEO since April 2011. A public relations win, perhaps, but the fact that Microsoft can attract almost 200,000 votes for greater privacy doesn't necessarily mean anyone is abandoning Google services or changing his or her behavior.

With regard to search rather than Gmail, Microsoft hasn't managed to grow Bing at the expense of Google. Since December 2012, Bing's global desktop marketshare is up about 1%, according to Net Market Share, from 4.65% to 5.45%. Google's global desktop marketshare dropped significantly during this period, but that appears to be the result of the recent inclusion of Baidu, the major search engine in China, in the Net Market Share statistics. And Google's global mobile search marketshare grew during the same period.

Asked to provide figures documenting the impact of its Scroogled campaign, a Microsoft spokesperson in an email said:

The Scroogled campaign has struck a chord -- millions of people have visited Scroogled.com and hundreds of thousands have signed the petitions to tell Google to stop violating their privacy. These people are concerned about the way Google treats them and their privacy, and want to express themselves and their concerns about Google. The Scroogled shirts and mugs are a fun way for them to do that.

Curiosity about Microsoft's Scroogled.com website shouldn't be taken as conversion. Even so, an article published last month in Ad Age asserts Microsoft's "Scroogled" campaign can be considered a success just because it is getting people to consider Bing.

Were this a case of an anticorporate crusader ridiculing a large company with custom-designed merchandise sold through CafePress.com or Zazzle.com, chances are a threatening legal letter would be enough to derail the campaign. The National Security Agency and the Department of Homeland Security have tried that approach to prevent parodies.

But confronted by a company of similar size, intimidation isn't going to work. Google doesn't have any good legal options.

"I think it's a pretty clear case of fair use," said EFF intellectual property director Corynne McSherry in an email. "The critical commentary is very clear. Which is not to say that a litigation-shy merchandise provider wouldn't feel intimidated if it did get a threat letter -- unfortunately that's all too common."

Paul Alan Levy, an attorney with the Public Citizen Litigation Group, agreed that Google doesn't have a trademark claim. "If Microsoft is so freaked out by Google that they need to do this, they must be desperate," he said in a phone interview. "GM doesn't do that to Ford."

Levy suggests Google should take the criticism in stride. "Sometimes being attacked is a form of flattery," he said. "Back in the '70s, some people left off Nixon's enemies list felt they'd been disrespected."

Google appears to be doing just that. In an email, a Google spokesperson said, "Microsoft's latest venture comes as no surprise; competition in the wearables space really is heating up."

@ Michael Endler, you can be sure about me at least. I don't trust Microsoft any more than Google. Whether it is about users or about law, we consider theft which is caught. How can we be sure that no stealing story will appear about Microsoft in future? We never thought of Google too until it became public.
Reply  |  Post Message  |  Messages List  |  Start a Board

It looks cheap at the outset running such maligning campaign with such 'commitment', that too from another similar corporate giant like Microsoft. Microsoft had better finding ways for improving her services and giving users enough to come to them instead of resorting to something like this. It looks like they are finding it impossible to compete with Google in technology and services, that's the message I get at least.
Reply  |  Post Message  |  Messages List  |  Start a Board

Whether the merchandise is funny or not, the big question is what would it take to get people to switch to Bing? A funny mug isn't going to make a dent in this challenge, though the snark may create some social media buzz.
Reply  |  Post Message  |  Messages List  |  Start a Board

Yeah, I'm really skeptical that the whole "scroogled" campaign is achieving what Microsoft hopes. I'm sure Microsoft is persuading a few people to be more cautious with Google, but given how off-putting people seem to find the ads, I'm not sure if it's balancing out in Microsoft's favor. I doubt that many people believe Microsoft is more trustowrthy with consumer data than anyone else.
Reply  |  Post Message  |  Messages List  |  Start a Board

Both companies have to hand over data to the NSA, GCHQ and other organisations. I don't see how Microsoft's hands are any cleaner than Google's.
Reply  |  Post Message  |  Messages List  |  Start a Board

Everyone knows Microsoft would happily steal your data if only they had the marketshare. Big corporation calling another big corporation names. Give me a break. Hypocrites.
Reply  |  Post Message  |  Messages List  |  Start a Board
Editors' Choice
Hot Topics