Meeker: Internet Has Only Begun Changing Our Lives - InformationWeek

Kleiner Perkins partner Mary Meeker presents her annual take on how the Internet is changing business, as US and China dominate among Web companies.
IT Hiring, Budgets In 2015: 7 Telling Stats
(Click image for larger view and slideshow.)

New giants of the global economy are being born and maturing on the Internet, companies like Alibaba, Google, and Amazon. To a surprising degree, what used to be mix of international companies is now a more uniform pattern of ownership: the top 15 are all owned by businesses in either the US or China.

In her annual report on Internet Trends for 2015, Mary Meeker highlights how much has changed since the Internet's take-off point 20 years ago. In 1995, publicly owned companies with a strong business presence on the Internet, such as Netscape, Apple, and the German-owned Axel Springer, amounted to $17 billion in market capitalization.

Twenty years later, Apple remains on the list and is bigger than ever, but Netscape and Axel Springer have dropped off it. The top 15 Internet companies represent a market valuation that has increased 141-fold to $2.4 trillion, reflecting the explosive growth of Internet adoption and use as a platform for business around the world. 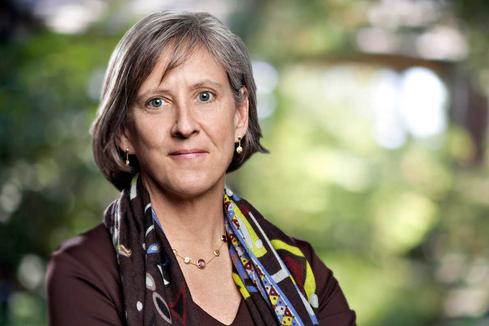 Meeker is the former Morgan Stanley analyst who is now a partner at the Silicon Valley venture capital firm, Kleiner Perkins Caufield Byers. Her voice has become respected for her ability year after year to paint in broad strokes how the Internet is changing business and our lives. Her 2015 report starkly lays out the owners of the future online economy, and it's a picture that will give many in other parts of the world pause.

Apple, worth $3.9 billion in 1995, leads the list at $764 billion in market value today, followed by Google, not on 1995's list but now worth $373 billion. No. 3 is Alibaba, the Chinese ecommerce and payment engine, worth $233 billion. Other companies with ownership in China include No. 6 , Tencent Holdings, the online entertainment and social network worth $190 billion, and search engine, Baidu, No. 8, just behind eBay and worth $72 billion. Also, No. 11, online retailer JD.com, is worth $48 billion.

Meeker presented both her 1995 and 2015 lists to make the point that the Internet is changing the economy and those changes are redistributing the relative value of global businesses around the world. Axel Springer, the German media giant, is scrambling to shift its businesses online. The Canadian broadcaster and wireless service supplier, iStar Internet, No. 11 on the 1995 list, is still in business but didn't show up on this year's listing.

In the 20 years she's been doing the report, the number of Internet users has risen from 35 million in 1995 to 2.8 billion in 2015. That's a change from .6% of the world's population to 39%. India is on track to become the second largest consumer of the Internet by number of users in the world over the next few years. The addition of new users is growing at a rate of 33% there. China already leads with 23% of all Internet users but is now growing at a slower rate of 7%. The US is adding 2% to its user total and accounts for 10% of users. In Brazil growth in users is 4%. In Japan, the pace has leveled off and stopped growing.

Mobile Drives Our Increased Internet Use

Meeker aired the results of her latest findings at CodeCon May 27, an annual technology conference for tech enthusiasts in Rancho Palos Verdes, Calif. Her annual presentation was a whirlwind tour of data, as she clicked through 197 slides. One of the primary things to emerge from her Internet Trends report is the unmistakable growth in mobile computing as the way people are interacting with the Internet.

Time spent with digital media per day has shown regular growth -- from 2.7 hours a day in 2008 to 5.6 hours today. Mobile computing is almost entirely responsible for that growth. Use of a desktop or a laptop computer as the means of access has remained basically steady at 2.4 hours a day. Access via mobile device has increased from .3 hours to 2.8 hours, now accounting for 51% of the total, Meeker said.

The growing use of mobile opens the door for more mobile advertising. Mobile users account for 24% of the time spent on the Internet but just 8% of the $50 billion in advertising dollars spent trying to reach Internet consumers. That means there's a $25 billion opportunity remaining for new mobile advertising, Meeker said. Mobile advertising is likely to grow at a rate of 34% a year, while the amount spent on desktop advertising will decline 11% a year, Meeker predicted.

Mobile advertising is likely to become more tuned in to what the user is doing, such as Google's ability to show products in a story close to where the mobile user is located. Facebook is offering carousel ads that let a user scroll through many images of a product sought. New advertising is appearing as short videos that are fun to watch. Pinterest cinematic pins offer video related to pins a person has scrolled through, marking content of interest on the Internet.

Many sites, including Amazon, Facebook, Twitter, and Google, are adding "buy" buttons that minimize the friction to buying at the moment that it sparks an interest. If the user's ID has already been established and credit card information is on file, then the buy button lowers many barriers to impulse purchasing. DocuSign and other electronic signature generators are making it possible to bypass paper and do business remotely with legally recognized name signings.

Millennials are now the largest group in the workforce. Their expectations of what the work environment will be and the ways they will thrive in it are different from the generations that have gone before. When it comes to collaboration, they clearly prefer to do it online through automated systems, not in meetings. They want to bring their own devices to work and have them supported.

All in all, from the perspective of two decades, the Internet's evolution appears to have come a long ways. But "it's stil early," Meeker warned. This process of empowering the consumer, changing business processes, and substituting new patterns of consumption has only just begun.

Charles Babcock is an editor-at-large for InformationWeek and author of Management Strategies for the Cloud Revolution, a McGraw-Hill book. He is the former editor-in-chief of Digital News, former software editor of Computerworld and former technology editor of Interactive ... View Full Bio
We welcome your comments on this topic on our social media channels, or [contact us directly] with questions about the site.
Comment  |
Email This  |
Print  |
RSS
More Insights
Webcasts
Securing and Monitoring Networks in the 'New Normal'
ROI and Beyond for the Cloud
More Webcasts
White Papers
Centralized Security Policy Management Across Hybrid Cloud Environments Should be an Obvious Strategy
The Trouble with Phishing
More White Papers
Reports
The Malware Threat Landscape
2020 State of DevOps Report
More Reports

All these numbers are very interesting. I have a doubt about this tho:
Consumer (internet) usage grew 31% in 2012, 24% in 2013, and 21% in 2014.
I thought the internet usage will go up and not down, as the years go by. Are these percentages taking in consideration the mobil market as well?
Reply  |  Post Message  |  Messages List  |  Start a Board

Asksqn, you are correct, it's only just begun. But the pattern of direct interaction through a mobile appb  is the dominant pattern of the foreseeable future. Look for them to get more and more sophisticated, location aware and personalized.
Reply  |  Post Message  |  Messages List  |  Start a Board

>> [...] substituting new patterns of consumption has only just begun.<<

Particularly since a great majority of contemporary 30-somethings are embracing a lifestyle that is a lot more environmentally friendly than what havoc the Boomers wreaked on the planet.
Reply  |  Post Message  |  Messages List  |  Start a Board

Gary, the trick may be in using the mobile data plan only when there is no free WiFi around. Then it can last more. Otherwise, 2, 4, or 6 gigs is not enough, less for heavy users. -Susan
Reply  |  Post Message  |  Messages List  |  Start a Board

I'm a dinosaur who interacts with the internet via a desktop. Most people's mobile data plans have 4-gigs download a month, and I probably go through that almost every day. How do they survive?.
Reply  |  Post Message  |  Messages List  |  Start a Board

Charlie, that's an amazing example. 30 minutes average for visitor?! That's an in incredible amount of time and speaks to the need that it's filling. I wonder if Meeker used the word "disruption" or "disruptor" in her report, or is that now so cliche? Almost like "smartphone."
Reply  |  Post Message  |  Messages List  |  Start a Board

Wattpad, a site for self-publishing fiction writers, gets 40 million unique visitors a month, who average 30 minutes per visit to the site. Each minute of the day,the equivalent of 24 hours of reading material is posted to the site, with 90% of the traffic to the site coming off of mobile devices, according to Meeker's report..
Reply  |  Post Message  |  Messages List  |  Start a Board
Editors' Choice
Hot Topics