First announced in 2014, the LinkNYC network, which looks to install WiFi access points in out-of-date NYC pay phones, started rolling out the first of these installations this week. However, some issues of personal information hover below the surface.

LinkNYC, which first announced that it would it would transform out-of-date New York City pay phones into WiFi hotspots in 2014, has started to roll out the first of these installations in the Big Apple this week. Eventually, this public-private partnership plans to deploy 7,500 of these access points.

For those unfamiliar with LinkNYC, the organization is a hybrid of the NYC Mayor's Office of Technology and Innovation, the Department of Information Technology and Telecommunications (DoITT), and CityBridge, which is a consortium of technology and advertising companies that includes Titan, Qualcomm, Comark, and Transit Wireless.

The idea is pretty simple: Transform obsolete telephone technology with a modern flare that addresses the need for 24-hour, 365-day Internet connectivity in a city with 8.5 million residents, as well as millions of tourists.

The revamped kiosks began appearing Dec. 28. The Verge spotted one installation underway outside a Starbucks on 15th Street and 3rd Avenue, near Union Square in Manhattan. Another 500 or so access points are scheduled to appear by July 2016. 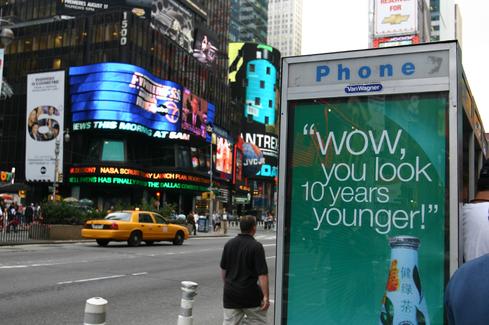 The hub points will require a few weeks of testing to be fully operational.

LinkNYC has noted that WiFi service will be gigabit speed, and should be useable between 150 to 400 feet away from each kiosk.

Although the organization promises gigabit speeds from the hubs, a ZDNet analysis of the 802.11ac spec puts the top speed (with the right modem) at more like 40 Mbps. If the modem in the portable device is not capable of handling the protocol, it will run at the maximum speed for which it is capable.

The 10-foot tall kiosks will be 11 inches thick and carry 55-inch digital screens on each side, according to LinkNYC. The digital screens will carry advertising, and those ads will pay for the costs of operation and needed upgrades during the hub's lifetime.

One may wonder if the personal information of users and their requests might also be a funding source. It's a thorny issue. LinkNYC notes on its website: "We take security and privacy very seriously and will never share or sell any personal information."

However, in my estimation, there is a huge loophole in that statement. As WiFi hotspots, the kiosks will no doubt be gathering information about users.

Kiosk users only need to enter a name and email to sign up for the WiFi service. But -- and this is a big but -- the network will likely be logging other data that your device volunteers. It seems only logical that some the companies involved in this endeavor may want to use that information to make decisions about which ads to show you.

So, it seems likely -- given the stated policies -- that aggregate information about users can and will be provided to advertisers, all in the name of targeting the effective reach of the ads.

After all, one of the companies that is involved in this endeavor is backed by Alphabet -- the newly minted parent company of Google.

[Read how one organization is bringing WiFi to remote corners of the world.]

Two companies involved in the creation of the hubs -- Control Group and Titan -- have merged into a newly formed entity called Intersection. A press release announcing the merger noted:

Intersection is the result of a merger between Control Group and Titan, key members of the team behind LinkNYC, the groundbreaking project to turn payphones into urban information hubs. It is owned by a consortium of investors including Sidewalk Labs.

Larry Loeb has written for many of the last century's major "dead tree" computer magazines, having been, among other things, a consulting editor for BYTE magazine and senior editor for the launch of WebWeek. He has written a book on the Secure Electronic Transaction Internet ... View Full Bio
We welcome your comments on this topic on our social media channels, or [contact us directly] with questions about the site.
Comment  |
Email This  |
Print  |
RSS
More Insights
Webcasts
People Are The Most Important Part of Autonomous SOC
Don't Miss This Cybersecurity Virtual Event
More Webcasts
White Papers
How to Build Your Incident Response Plan
Supercharge Incident Response with DDI Visibility
More White Papers
Reports
Key Strategies for Managing New Risks in Cybersecurity
The State of Cloud Computing - Fall 2020
More Reports

@impact now. Did I tell you that I went to NYC with some friends and all their smartphones ran out of battery, but mine.  I think, charging stations are a great idea.  Since,  battery life isn't going to get better anytime soon, that is the best we can hope for now.  Vandalism is a problem in NYC.
Reply  |  Post Message  |  Messages List  |  Start a Board

Yeah, the charging stations are a good idea.

If the mooks don't cut down and steal the entire kiosk.
Reply  |  Post Message  |  Messages List  |  Start a Board

The problems outlined for this Wi-Fi hotspot are really no different than the hotspots at every coffee shop in New York City . Unless users take their own security precautions on their devices they run the risk of their information being hacked at any public hotspot . I do however think this is a good idea since the payphones are really an eyesore New York City . I also like the idea of charging stations , after hurricane Sandy so many people were without electricity . Public charging spots would be a lifesaver in any kind of disaster that impaired electricity . Public charging stations are really part of her communication system as a country now . Implementing more of them should be a priority .
Reply  |  Post Message  |  Messages List  |  Start a Board

I'm sure that there will be some security measures taken.

Considering it's the city, they will have to worry more about someone stealing the doggone kiosks themselves.
Reply  |  Post Message  |  Messages List  |  Start a Board

I would like that promoters of such technology to be more honest with consumers, you get free WIFI access on the city but we will be monitoring your smarphone.  As they say, there is no free lunch.  I wonder whether attackers will use such hotspots to steal people's personal data. What will the city be doing to protect people personal information as they use such hotspots.
Reply  |  Post Message  |  Messages List  |  Start a Board
Editors' Choice
Hot Topics