JetBlue will be able to offer free WiFi service across its entire fleet by the fall of 2016.

Low-cost airline carrier JetBlue is stepping up its efforts to provide its customers with free in-flight WiFi. The company announced that it has completed installation of Fly-Fi -- the name of its satellite-based service -- on its fleet of more than 150 Airbus A320 and A321 aircraft.

Fly-Fi uses Ka-band satellite technology to offer a broadband Internet experience similar to something customers have at home, including the ability to stream video and use multiple devices at once.

In an effort to improve the in-flight WiFi experience, JetBlue has also formed partnerships with a variety of media companies, including Amazon, MLB at Bat, and The Wall Street Journal. 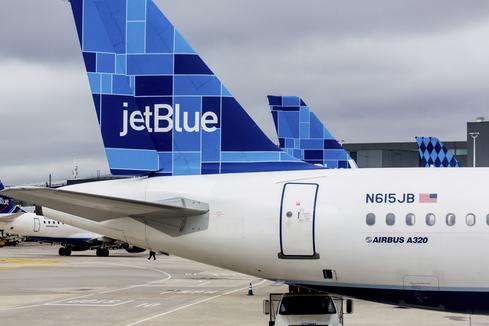 JetBlue and Amazon are also preparing to bring unlimited, on-demand entertainment to passengers with the upcoming launch of Amazon Video onboard, giving Amazon Prime members instant streaming access to tens of thousands of movies and television episodes in-flight, at no additional cost with their membership.

"Soon every JetBlue customer will step onboard knowing their aircraft is equipped with free, fast Internet and entertainment, the same way they expect our friendly service and the most legroom in coach," Jamie Perry, vice president of brand and product development for JetBlue, wrote in an Oct. 14 statement. "Our Fly-Fi model has proven that there is a way to offer customers more without adding extra costs to their travel."

Customers connected to Fly-Fi, which boasts speeds of up to 20 Mbps per device, can also access content on The Hub, which hosts a growing collection of entertainment, educational content, news, and video from Vox Media, PBS, National Geographic, and others.

The company currently carries more than 32 million customers a year to 91 cities in the US, the Caribbean, and Latin America with an average of 875 daily flights.

Offering WiFi on domestic flights is not unusual, but JetBlue's complimentary service and focus on faster speeds could go a long way to assuaging customer complaints of spotty connectivity and middling value for money.

A 2014 report from Honeywell Aerospace indicated that in-flight WiFi is becoming increasingly influential on passengers' buying choices, including flight selections. In some cases, they will even pay more for a specific flight because of its wireless options.

Nearly one in four (22%) surveyed admitted they've paid more for a flight with WiFi, and nearly one in five (17%) have switched from their preferred airline because another carrier had better WiFi offerings.

More than 20 airlines around the world are providing free in-flight WiFi today. According to SITA OnAir's estimates, more than double will do so by 2020.

Nathan Eddy is a freelance writer for InformationWeek. He has written for Popular Mechanics, Sales & Marketing Management Magazine, FierceMarkets, and CRN, among others. In 2012 he made his first documentary film, The Absent Column. He currently lives in Berlin. View Full Bio
We welcome your comments on this topic on our social media channels, or [contact us directly] with questions about the site.
Comment  |
Email This  |
Print  |
RSS
More Insights
Webcasts
Hybrid Cloud: The Great Balancing Act
Strategies for Success with Digital Transformation
More Webcasts
White Papers
Sunburst: Impact and Timeline
How Hyatt Eliminated Bot Attacks Without Impacting their User Experience
More White Papers
Reports
Special Report: Edge Computing: An IT Platform for the New Enterprise
2020 State of Cybersecurity Operations and Incident Response
More Reports

I actually have the Bose QC25's which are excellent. But they drown out jet noise, not obnoxious and smelly passengers... Maybe Bose makes special nose plugs as well?
Reply  |  Post Message  |  Messages List  |  Start a Board

I'd recommend some good earplugs or a nice set of Bose noise-cancellation headphones. Well worth the cost.
Reply  |  Post Message  |  Messages List  |  Start a Board

Now if there was only a way to enforce the silence! I've been on red eyes from the west coast to the east coast and it was like a party. Sometimes you can't win. I think the only truly quiet places on a commercial flight are in first class on a large plane and upstairs on a 747.
Reply  |  Post Message  |  Messages List  |  Start a Board

That is so true. There was a recent incident where Governor Christie was screaming into his cell phone in an Amtrak Quiet Car! Even in a non quiet car that is rude. But unfortunately it happens everywhere, even when you pay extra for the quiet.
Reply  |  Post Message  |  Messages List  |  Start a Board

Well I did not say i was using those services on a plane. However you do need the bandwidth in hotels to use those services there.
Reply  |  Post Message  |  Messages List  |  Start a Board

kstaron, I don't know how the airlines can regulate anything beyond noise level of what people do on wi-fi. I have  been on the train with people creating personal hotspots and caught and heard glimpses of things that had no business being in public. It really comes down to people knowing how to behave in public, and there will always be people who simply don't know how to.
Reply  |  Post Message  |  Messages List  |  Start a Board

I like the idea of free wifi on planes, but of course there's the fact I may not have control over what the person next to/ in front of me is doing with that wifi. Will I hear snippets of someone's skype conversation? Or worse snippets of somebody's 'adult' movie? Haven't flown where there's readily available wifi recently. Do the airlines rely on people to behave or do they have some basic, 'you're in public people' kind of rules?
Reply  |  Post Message  |  Messages List  |  Start a Board

To be honest, I bet you in-flight dating is already happening. Certain dating apps only connect you with people within close proximity. Any flight attendants in the house? There must be some crazy stories of complete strangers on a long flight breaking cabin rules.
Reply  |  Post Message  |  Messages List  |  Start a Board

Webex and Facetime type apps should be like cellphone usage on planes --- technically possible but forbidden. Too much already exists to agitate people before, during and after flights. What else can people do with this free wi-fi to drive others insane? How about in-flight dating services?
Reply  |  Post Message  |  Messages List  |  Start a Board
Page 1 / 3   >   >>
Editors' Choice
Hot Topics