An iOS developer has not only discovered hidden code in the iOS 8 beta that enables split-screen multitasking, but also found a way to activate the feature in a simulator.

In the weeks leading up to the company's Worldwide Developers Conference (WWDC), reports claimed Apple was working to enable iPads apps to run side-by-side, but that the feature might not be ready in time for the conference. Sure enough, when Apple introduced iOS 8 earlier this month, the split-screen feature wasn't discussed.

Steve Troughton Smith, founder and CEO of mobile app development firm High Caffeine Content, tweeted Monday that he'd discovered the relevant code while digging through the iOS 8 developers' preview. On Wednesday, he posted a video showing the secret feature running in a simulator. The video demonstrates that apps can occupy either one quarter, one half, or three quarters of the screen. Users will evidently be able to resize panes with a two-fingered horizontal swipe.

As activated by Smith, the multitasking feature includes only rudimentary functionality, suggesting Apple is still working on the feature. Though less popular than iPads, Windows slates have already demonstrated, with their Snap view, that split-screen multitasking can enhance the tablet experience. With the new feature, for example, iPads users would be able to pull content from the Web directly into an email, without having to enter and exit the individual apps as they do today.

Though Smith's discovery proves Apple is investigating iPad multitasking, much remains unknown. It's not clear if the feature will be included this fall when iOS 8 becomes available to the public, for example. Whether Apple will extend multitasking to all iOS devices, or just to the iPad Air, is also uncertain.

Similarly, it remains to be seen whether Apple's implementation will differ significantly from Microsoft's. Windows tablets offer split-screen apps only while in landscape mode, for example, a restriction that might make sense for iPads as well. Many Windows models can simultaneously display only two apps, in a 50-50, a 40-60, or a 30-70 split. Larger devices with pixel-dense displays can snap up to four apps, however, with each one occupying a quarter of the screen. 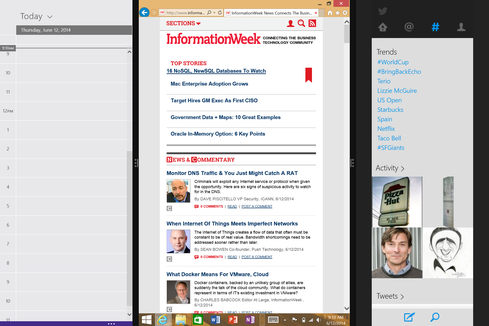 Microsoft's Surface Pro 3 can simultaneously show up to three apps in split-screen, or Snap, view.

By the same logic, Apple might decide to include more functionality in the iPad Air than in the iPad Mini, or even to leave the Mini unsupported. iOS 8's hidden code has also rekindled long-running rumors that Apple is working on a larger "iPad Pro." The company hasn't indicated intentions for such a device, but the research firm IDC recently projected that demand for plus-sized tablets will grow over the next few years. Microsoft, Samsung, and other manufacturers are currently testing the market with 12-inch designs, but time will tell whether Apple joins in.

Apple's OS X "Yosemite" developers preview, another WWDC release, also contained code that's raised eyebrows -- namely, lines that suggest Apple is working on iMacs with Retina displays that could exceed 4K resolution. Apple hasn't released any new hardware so far this year, but with clues popping up in both OS X and iOS, a few surprised could be on the way.

What do Uber, Bank of America, and Walgreens have to do with your mobile app strategy? Find out in the new Maximizing Mobility issue of InformationWeek Tech Digest

Michael Endler joined InformationWeek as an associate editor in 2012. He previously worked in talent representation in the entertainment industry, as a freelance copywriter and photojournalist, and as a teacher. Michael earned a BA in English from Stanford University in 2005 ... View Full Bio
We welcome your comments on this topic on our social media channels, or [contact us directly] with questions about the site.
Comment  |
Email This  |
Print  |
RSS
More Insights
Webcasts
Building Asset Management into Your Enterprise Security Strategy
Managing a Hybrid Cloud Infrastructure
More Webcasts
White Papers
The Essential Guide to Securing Remote Access
Identify Threats 82% Faster: The Value of Threat Intelligence with DomainTools
More White Papers
Reports
Key Strategies for Managing New Risks in Cybersecurity
Are We Cyber-Resilient? The Key Question Every Organization Must Answer
More Reports

I worry that having multiple windows open will make the iPad's battery drain much faster.
Reply  |  Post Message  |  Messages List  |  Start a Board
InformationWeek Is Getting an Upgrade!