100%
Tweet
Only 1.1% of Android devices run the latest operating system, versus 70% of Apple iPhones and iPads.
10 Best Tablets Of 2013
(click image for larger view)

Android device owners are often just as excited as their iOS-using counterparts to grab the latest operating system for their hardware. However, most Android devices can't be updated until the carrier approves the new OS, and that often takes a lot of time. Apple's operating system model sidesteps the wireless network operators, giving it a huge advantage over Android. The adoption rates of iOS7 and Android 4.4 KitKat highlight this effect in great detail.

More than half of iOS device owners in North America updated to iOS7 within a week of the operating system's Sept. 18 release, according to Chitika Insights, an online advertising network. Two-and-a-half months later, the iOS7 adoption rate in North America (based on web traffic) has surpassed 70%, putting it on track to be Apple's fastest-adopted OS yet.

iPhone users are slightly quicker to adopt new operating systems than are iPad users. Chitika Insights analyzed tens of millions of US and Canadian iOS-based online ad impressions on its network between Oct. 25 and Nov. 18. Its data shows that 74.1% of iPhone users have jumped to iOS7, while only 63.8% of iPad users have upgraded. iOS6 is still being used on 22.4% of iPhones and 24.6% of iPads. A small number of iPhone users, 2.6%, are still using iOS5, but a higher number, 8.8%, of iPad owners are still using iOS5. This can be attributed to the large number of original iPads still in use, since they cannot be upgraded beyond iOS5.

iOS6 took six months to reach 83% of all iOS devices. Chitika believes iOS7 will reach that point much faster.

"The latest analysis again underscores that iPhone users, and iPad users to a lesser extent, update at extremely high rates, acting as a distinctive selling point when it comes to attracting application and mobile Web developers to the platform," said Chitika.

The key factor here is how iOS devices are updated. iPhone and iPad owners can jump from one operating system to the next by downloading and installing the new one themselves. Apple generally releases the OS to all devices at the same time, maximizing the potential number of people who will update. 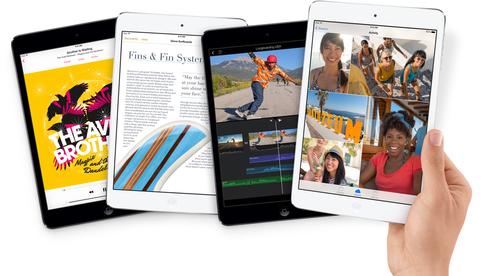 Android's adoption rate stands in stark contrast to that of iOS. Google recently released its monthly breakdown of Android version stats, and the difference is staggering. A month after its debut, Android 4.4 KitKat is registering on just 1.1% of Android devices. (It's important to note that Chitika measured adoption only in North America, while Google measured worldwide adoption.)

The reason for KitKat's limited appearance is the way Android devices are generally updated. KitKat is available only to a handful of phones, including the Nexus 5, Nexus 4, and Motorola Moto X. It is also available to the Nexus 7 and 10 tablets. These devices, though popular, are not as popular as iPhones and iPads. They make up a much smaller percentage of the entire Android installed base. Google is able to deliver system updates to Nexus-branded devices directly. Most other Android devices must receive their operating system updates from the wireless network operator -- and therein lies the rub.

Before an Android phone can be updated, the manufacturer needs to rebuild the platform for each specific phone for each specific carrier. The carrier then needs to approve the updated platform. This process can take months. Only after the carrier approves the updated OS will it be pushed out to end-user devices. iPhones and iPads don't need carrier approval to grab the latest OS.

We welcome your comments on this topic on our social media channels, or [contact us directly] with questions about the site.
Comment  |
Email This  |
Print  |
RSS
More Insights
Webcasts
SecDevOps: Tying Security to Your Application Development Processes
Using Artificial Intelligence, Deep Learning and Machine Learning for Cyber Defense
More Webcasts
White Papers
DevOps for the Database
How to Build Your Own CDN
More White Papers
Reports
InformationWeek & Network Computing Report Round Up
The Drive for Shift-Left Performance Testing
More Reports

Wow..another miss informed post..gesh..when does it end? Brand new phones can't be updated at all? My GOD man..do you or have you ever owned an Android device? I'm an app dev and to read your post almost made me throw up in regards to the level of ignorance. Just to quiet your entire post...I'm running 4.4 kit kat on a Samsung Galaxy S3. Any android device can be upgraded at anytime. Its called open source. Might want to learn about CyanogenMod. We don't have to wait on carriers, we can update anytime.
Reply  |  Post Message  |  Messages List  |  Start a Board

You may want to read this:

This is what I am basing my post on. The actual upgrade was not forced, but if you had your phone plugged in and connected to WiFi (say, overnight) the next morning you had 3 GB less storage space that you could not get back. At that point, it seems like a waste of space to NOT upgrade.

Maybe you did not have your phone connected to WiFi at night, such as my Father-In-Law. He is still rocking iOS6 because he doesn't want to connect his company phone to his home WiFi, and it will likely stay that way for a while.

However, this did happen to a number of people, and some of them were not terribly happy.
Reply  |  Post Message  |  Messages List  |  Start a Board

You're not making any sense, I have a number of iOS devices and not one was FORCED to upgrade to the next OS.  I got a message that said an upgrade was available and after choosing not to, that was that.  Nothing loaded or sat on my device.

When I was ready to upgrade, I went to the Settings and had to then DL the iOS 7 file.  When the file was DLed and ready I then had to choose to install it.
Reply  |  Post Message  |  Messages List  |  Start a Board

This is the stupidest, least informed headline I've seen this week.  "Dewey beats Truman" pales in comparison.  That at least could have happened when they had to go to press, but comparing adoption rates between the two indicates a criminially ignorant headline writer, or one who cares more about sensationalizing instead of informing, which borders very closely on lying.
Reply  |  Post Message  |  Messages List  |  Start a Board

This DEFINITELY has nothing to do with the fact that Apple pushed down iOS7 forcibly, whether users wanted it or not. Sure, they didn't HAVE to install it, but if it's taking up room that I can't get back, I may as well install it, right?


I called this a few months ago, because Apple always proudly states the amount of adoption its new OS gets. If you force people to upgrade, there will be artificially boosted numbers. The number I would be more interested in is the percentage of people who chose to install it freely, knowing full well what it was going to do. The user reviews for iOS7 on Cnet are abysmal.

Granted, 99 reviews is not a good cross section, but I know a bunch of people who upgraded and dislike many things about iOS7.
Reply  |  Post Message  |  Messages List  |  Start a Board

1. Nexus is not losing support in just one year. In a matter of a few weeks I managed to get my 4.4 update on my Nexus 4. Not to mention my wife and several of my friends.

2. Yes there is an issue with updates but that is being resolved. Already many samsung phones, LG, Moto X and HTC One phones are getting the newest updates

3. Google setup this latest update to reduce the requirements on phones so older phones can operate it with much less power. A phone with a single proc and 512 RAM can run the 4.4 effeiciently can that be said for IOS 7?

4. For those that cannot get the update because of the carriers/manufacturers (not Google) Google has broken out parts to be updated through the App store known as Play. This allows them to get some of that functionality without getting the full update.

Do me a favor next time you want to go out and blast another product know what you are talking about. If Google made all the phones the adoption rate would likely be the same or higher. It would be more interesting to see what the adoption rate for Nexus 4.4 and Iphones are and compare that. The philiosiphy that Google has is choice is a good thing and yes that can cause problems in specific areas (IE carriers/manufacturers might choose not to allow the device to updated) but consumers should educate themselves on the disadvantages and the advantages and decide for themselves. That is not IOS philosiphy. Theirs is more the one choice we give you is the best for you.
Reply  |  Post Message  |  Messages List  |  Start a Board

There are other problems. Many Android phones that are almost new, and sometimes, brand new phones can't be updated at all. And some of those phones as new models come with an outdated version of the OS out of the box. Even Nexus models are proving to be losing support just after a year or so. A problem is that manufacturers would prefer you to buy a new Android device than to upgrade to one you have. This is especially true since most makers are actually losing money on their phones. Even Samsung doesn't make a huge profit on each model sold. Google gave carriers the right to add their own software that then might require testing with a lot of models. That was a bad decision, but Google wanted to make Android as popular with makers and carriers as possible, so they gave them unlimited leeway to do whatever they want.
Reply  |  Post Message  |  Messages List  |  Start a Board
Editors' Choice
Hot Topics