Google's Project Fi: Disrupting Wireless As We Know It - InformationWeek

0%
Tweet
Google's Project Fi will use a mix of cellular and WiFi to connect calls, messages, and data. Though inexpensive, Project Fi's focus isn't on the cash.

Project Fi, the low-cost, invitation-only wireless service announced by Google on Wednesday, is aptly named. Google is jumping into the wireless game, but it's playing by a different set of rules that the search company hopes will alter the game altogether.

To start, Project Fi relies on a mix of wireless technologies to make connections.

Google partnered with Sprint and T-Mobile to provide LTE 4G cellular coverage, but the service will rely heavily on WiFi -- hence the "Fi" moniker applied to the service.

Project Fi works with a single handset, Motorola's Nexus 6. The Nexus 6 is able to hop between the LTE networks of Sprint and T-Mobile -- whichever provides the strongest signal in a particular spot -- thanks to advanced software. The software is tuned to prefer WiFi to LTE, however, and Google says the Nexus 6 will automatically -- and securely -- connect to one of more than a million free and open hotspots around the US. As subscribers move between LTE and WiFi coverage, the Nexus 6 will seamlessly switch between the various networks.

At least, that's what Google is promising.

Even though subscribers will be required to have a Nexus 6 smartphone, the service will work on other devices. 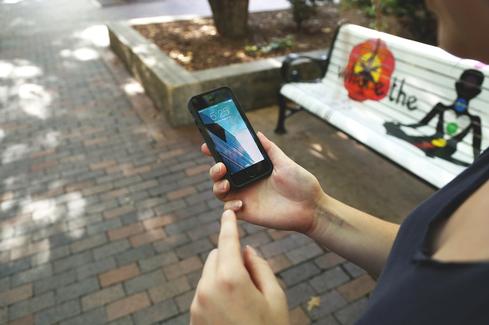 "With Project Fi, your phone number lives in the cloud, so you can talk and text with your number on just about any phone, tablet or laptop," explained Google. Customers' Project Fi number will work with any platform that supports Google Hangouts, including iOS, Windows, Mac, and Chromebook.

Misplace your Nexus 6? No worries. You can simply connect using another Hangouts-supported device. (This raises the question of why the $649 Nexus 6 is required in the first place.)

The technology pieces of the puzzle follow a course the industry has been on for some time. One need only look at MVNOs such as FreedomPop, Ting, and Republic Wireless to see similar business models.

What's more interesting is the pricing model Google has selected.

Google plans to charge people only for the exact amount of data they use each month. The basic service costs $20 per month and provides unlimited calling -- national and international -- texting, and Web access as long as you're on WiFi. If you wander out of WiFi coverage, you'll need to pay for a data plan. Google is charging a flat rate of $10 per gigabyte, so the basic service plus 1GB of data totals $30 per month.

[Read about the changes to Google's algorithm.]

Let's say you manage to stay connected to WiFi almost continuously and wind up using only 100MB in your first month. Since you only used 10% of your 1GB data allotment, Google will reimburse you for the 90% you didn't use, in this case $9. The intent behind this model is to crack open the larger carriers' use of something called "breakage." AT&T, Verizon, and others have convinced consumers to pay for defined buckets of data, such as 1GB, 3GB, or 5GB per month. People pay for these buckets, even if they know they won't use all of it, because they are afraid of being hit with extra fees.

In other words, the carriers have figured out how to get consumers to overpay for wireless service.

The key insight into Google's intent with Project Fi isn't obvious in anything it announced on April 22. Instead it harkens back to something Google's Sundar Pichai said while speaking in Barcelona in March: "Our goal here is to drive a set of innovations which we think the system should adopt," he said, likening Project Fi to the Nexus handset program.

Read that line again: Drive innovations the system should adopt.

Google wants to see the wireless industry change. It wants to see people connect to and use networks more seamlessly, use a variety of devices and platforms for base communication needs (calls and messaging), and, eventually, pay less for the wireless communication services they use. Google's goal isn't altruistic. The more connected people are, the greater the opportunity Google has to serve them ads, which, let's not forget, is still Google's main revenue generator.

Project Fi has clear limitations. Its compatibility with a single handset borders on the absurd. Google sells the Nexus 6 at the full $649 retail price, so there's no convenient payment plan to reduce the cost-of-entry here. Further, the monthly rates are essentially on par with the pre-paid offerings from Boost Mobile, Cricket Wireless, FreedomPop, MetroPCS, Republic Wireless, Ting, and Virgin Mobile. Switching to Project Fi isn't going to save you any cash.

Project Fi will, however, force you to think differently about how and where you consume wireless data. By opening users' eyes to what it really means to connect, perhaps Google will convince them to change their behavior.

Eric is a freelance writer for InformationWeek specializing in mobile technologies. View Full Bio
We welcome your comments on this topic on our social media channels, or [contact us directly] with questions about the site.
Comment  |
Email This  |
Print  |
RSS
More Insights
Webcasts
How Cyber Attackers Will Use & Abuse AI, ML Against the Enterprise
Why Performance Testing is More Critical Today
More Webcasts
White Papers
Getting Cloud Management Right
2020 Trends to Watch: Cybersecurity
More White Papers
Reports
The New Face of IT Automation
State of Cybersecurity Incident Response
More Reports

I registered for the invite, even though I don't own a Nexus.
If I read the article correctly, I might still qualify. We'll see. I'm on the "list" for now.
Reply  |  Post Message  |  Messages List  |  Start a Board


"From what the article says, it already knows the locations of free WiFi spots all over the world and connects to them accordingly. Therefore, they could build this functionality right into Android for ALL Android phones. This would still reduce people's usage of wireless data and would allow us, the consumers, to lower our data plans as we see actual reduction of usage. "

@GAProgrammer: I think it's different to know the locations of all free WiFi hotspots and to actually point out their locations and enable the users to connect with them. The free WiFi hotspot owners may not be too happy on this without their consent and they may require their prior approval before any user is given connectivity.

"I would prefer to pay for actual usage and I suspect many others do too. Wi-fi connectivity and safety are my biggest concern with the new service."

@Michelle: I think when you have a back up connection in the form of 3G or LTE and WiFi is just one of the connectivity options, it may not be so bad. You will not be solely dependent on that and connectivity may not be a big issue.
Reply  |  Post Message  |  Messages List  |  Start a Board

Interesting. This plan sounds extra beneficial to consumers that are mostly hooked up through their wifi.
Reply  |  Post Message  |  Messages List  |  Start a Board

Notwithstanding the already mentioned high priced point of entry, even if consumers have the extra jack to buy a Nexus 6 phone, that still doesn't guarantee being able to use Project Fi since like Grand Central before it was purchased and rebranded as Google Voice, participation is restricted to invitation only.

Technically, you already can - you have a fixed amount of data then pay for any extra, usually per GB. I am assuming you mean you want LOWER prices for the data when you go over?
Reply  |  Post Message  |  Messages List  |  Start a Board

Let's be honest - Google could ALREADY release this right now as a free app or integrate it directly into Android. From what the article says, it already knows the locations of free WiFi spots all over the world and connects to them accordingly. Therefore, they could build this functionality right into Android for ALL Android phones. This would still reduce people's usage of wireless data and would allow us, the consumers, to lower our data plans as we see actual reduction of usage.

Instead, they are getting a piece of the action and selling devices directly to customers, possibly getting a kickback from the service as well. If they were really wanting to "modify" the carrier's behaviors, this is what they would be doing instead. Not to mention, are we now letting Google decide who to punish, what is "fair" and who to control in the global marketplace? Scary stuff..

This article is confusing to say the least....IF the service works (no problem) with 'other' phones, why is the NExus 6 required to open an account? there is no mention of the role a Google Tel # subscription... why can't these semi-technical articles be better written?? one last time... CAN one subscribe to this service without owning/buying a Nexus 6? and does/will a subscribed google # suffice using any other smart phone...  HTC1 for example.
Reply  |  Post Message  |  Messages List  |  Start a Board

I am curious to see how this plays out. Big carriers have definately discovered a way to convince customers to buy more data now so they don't get hit with overage fees later. I would prefer to pay for actual usage and I suspect many others do too. Wi-fi connectivity and safety are my biggest concern with the new service.
Reply  |  Post Message  |  Messages List  |  Start a Board

@jastroff: heres' to hoping that too. The only gripe I have is that this technology is limited to Nexus 6. Hopefully that won't be a problem in the future.
Reply  |  Post Message  |  Messages List  |  Start a Board
Page 1 / 3   >   >>
Editors' Choice
Hot Topics