Rival search services gain a guaranteed spot alongside Google results, but competitors say it's not enough.

For Google, the agreement eliminates the prospect of a costly antitrust battle in European courts. The company still faces separate antitrust inquiries related to its Android business and to the way its Motorola Mobility unit, which is being sold to Lenovo, sought injunctions over industry-standard patents.

In January, Google settled an antitrust inquiry conducted by the Federal Trade Commission, to the dissatisfaction of FairSearch.org, a lobbying group supported by Oracle, Microsoft, Nokia, and various search industry competitors. Unsurprisingly, FairSearch.org offered a similar assessment of the Commission's decision.

[Stay in control of your privacy when using Google. Read 5 Google Opt-Out Settings To Check.]

"The European Commission has tentatively accepted a proposal by Google which is worse than doing nothing," said Thomas Vinje, FairSearch Europe Legal Counsel, in a statement.

On Wednesday, the Commission said that Google has guaranteed that when it promotes its own specialized search services, such as Google Shopping, on search pages, it will also promote the services of three rivals, "selected through an objective method." The picture below shows how that promise might make Google's mobile search results look -- the green shaded ads point to a competitor of Google Shopping.

Competitors that wish to be represented through these links will have to bid on them if Google normally charges for inclusion, as it does with Google Shopping. Vinje objects to the use of "an auction mechanism that requires participating companies to hand the vast majority of their profits to Google." 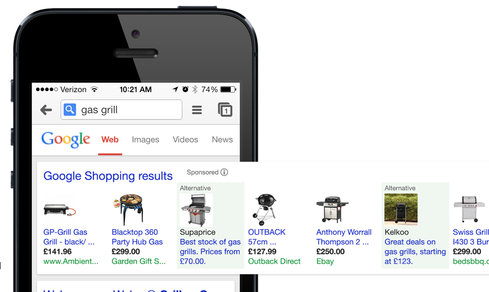 But Joaquín Almunia, vice president of the European Commission responsible for competition policy, stressed that the Commission is concerned with fair competition rather than interfering with Google's search algorithm or dictating its business practices. "Our concern was that, given the favorable treatment of Google's own services on its page, competitors' results which are potentially as relevant to the user as Google's own services -- or even more relevant -- could be significantly less visible or not directly visible, leading to an undue diversion of Internet traffic," he said in prepared remarks.

Google will be monitored for compliance for five years. The company has also agreed to concessions similar to those made to the FTC. It will allow content providers to withhold their content from Google's specialized search services without retribution. It will remove exclusivity requirements from its publisher advertising agreements. It will also remove its restrictions preventing advertisers from automating the export of data to competing ad platforms.


Thomas Claburn has been writing about business and technology since 1996, for publications such as New Architect, PC Computing, InformationWeek, Salon, Wired, and Ziff Davis Smart Business. Before that, he worked in film and television, having earned a not particularly useful ... View Full Bio
We welcome your comments on this topic on our social media channels, or [contact us directly] with questions about the site.
Comment  |
Email This  |
Print  |
RSS
More Insights
Webcasts
How Elite Analyst Teams are Transforming Security with Cyber Reconnaissance
5 Steps to Solving Modern Scalability Problems
More Webcasts
White Papers
Passwordless: The Future of Authentication
ROI Study: Economic Validation Report of the Anomali Threat Intelligence Platform
More White Papers
Reports
The State of Threat Detection and Response
2020 Threat Hunting Report
More Reports

I agree. The only monopoly in this instance is the one created by Google becoming the defactor choice of search tool and becoming synonymous with the term "search." Forcing it to advertise competitors seems very odd.
Reply  |  Post Message  |  Messages List  |  Start a Board

For Google it's a good thing that the concession and agreement were reached with EU. It will help to pave the way of Google search business in Europe. I am not sure if such kind of concession will cause the blending of flexibility and functionality. I don't think other search engines have special protection from government. But indeed Google's search capability is amazing, that's why it becomes so popular.:-)
Reply  |  Post Message  |  Messages List  |  Start a Board

If you wanted results of the other search engines you can go to those search engines, which are just as easy to access as Google. It's not as if they had a government-protected monopoly.
Reply  |  Post Message  |  Messages List  |  Start a Board
Editors' Choice
Hot Topics