Google once again aims to save online publishing, this time with an initiative called Accelerated Mobile Pages (AMP) that aspires to reduce load time for mobile Web content.

Back in April, Google launched its Digital News Initiative, an effort to help online publications in Europe restore the revenue stream that Google has dammed at the expense of those located further down the river. The initiative includes a $163 million fund to prop up publications that haven't quite figured out how to prosper under the new world order. If too many publications fail to thrive online, Google loses outlets for its ads.

AMP is also about ads. Google says it's about content, but it describes content as something that includes ads. "If content is fast, flexible and beautiful, including compelling and effective ads, we can preserve the open web publishing model as well as the revenue streams so important to the sustainability of quality publishing," Google explains on the Accelerated Mobile Pages website.

When ads and content are indistinguishable, people can't block one without blocking the other. That's the ideal future for the ad industry and it's the reason Facebook has pushed its boundary-blurring Native Ads. 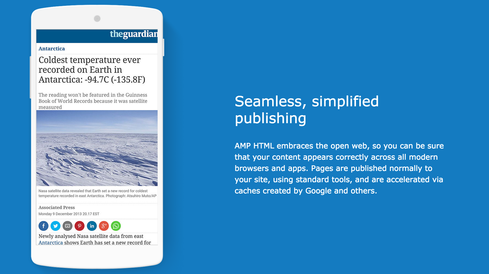 But that future remains a work-in-progress. Ad blocking has become a major problem for online publishers, particularly since Apple incorporated support for ad blocking in iOS 9. No company is more concerned about ad blocking than Google, because so much of its revenue depends on advertising.

Among the many reasons ad blocking appeals to people is that it makes Web pages load more quickly. The New York Times recently tested Web page load times with and without ads. One site tested, Boston.com, sent 19.4 MB of data with ads and but amounted to only 1.6 MB with the iOS ad blocker Crystal installed. On a 4G network, that translated into load times of 39 seconds with ads and 8 seconds without them. Users are paying for that data (mostly ads), not only in time, but also in data quotas or direct charges, depending on their mobile service plan.

Google has made speed a priority for years. Google Search would not be so dominant if it were slow to respond to queries. While Google has released tools like the Apache module mod_pagespeed and PageSpeed to improve the performance of Web pages, it clearly has further work to do.

AMP represents the next step in Google's ongoing effort to make Web pages more responsive. The company has convinced firms like Adobe, Pinterest, LinkedIn, and Twitter, along with several dozen publishers, to integrate its AMP code into their Web pages.

Google is offering AMP as an alternative to vendor-specific content frameworks like Apple News Format and Facebook Instant Articles. David Besbris, vice president of engineering for Google Search, said in a blog post that AMP will be integrated into Google News.

[Read Mobile Ad Blockers: Who Will Pay The Price?]

Just as Mozilla's asm.js represents a subset of JavaScript tuned for faster execution, AMP places some limits on HTML, CSS, and JavaScript to accelerate Web page load times. But the AMP library also includes its own custom extensions to make it easier to conform to best practices and to serve common online objects like image carousels in a way that's optimized for speed.

"Every time a webpage takes too long to load, [publishers] lose a reader -- and the opportunity to earn revenue through advertising or subscriptions," said Besbris.

Thomas Claburn has been writing about business and technology since 1996, for publications such as New Architect, PC Computing, InformationWeek, Salon, Wired, and Ziff Davis Smart Business. Before that, he worked in film and television, having earned a not particularly useful ... View Full Bio
We welcome your comments on this topic on our social media channels, or [contact us directly] with questions about the site.
Comment  |
Email This  |
Print  |
RSS
More Insights
Webcasts
What We Can Learn from Sports Analytics
Building the SOC of the Future: Next-Generation Security Operations
More Webcasts
White Papers
A Technical Deep Dive on Software Exploits
The Network for Whatever's Next; A CxO Guide
More White Papers
Reports
IDC FutureScape: Worldwide Digital Transformation Predictions
Special Report: Understanding Your Cyber Attackers
More Reports