A fresh coat of paint brings Hangouts for Android into the Material Design era. Discover what it will mean for users.

Google on Monday updated Hangouts for Android to enhance its ease of use, speed, and appearance, following a similar update of the iOS version in late June.

Google Hangouts 4.0 for Android implements Material Design, a design scheme the company introduced last summer. Material Design is essentially a responsive graphical dress code that can be maintained across devices and operating systems through common interface elements and styles.

Google refers to Material design as a "language," though that's an overly aspirational metaphor for a set of agreed-upon standards. Alternative design schemes include Microsoft's Metro and Apple's unnamed iOS 7 and iOS 8 conventions. 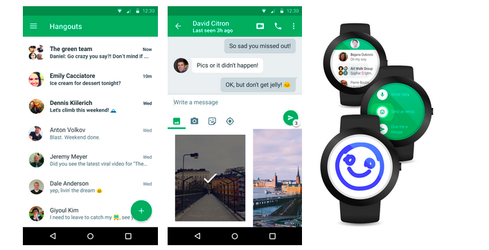 The ultimate goal of Material Design is to make apps as intuitive and comprehensible as possible in form and function. Google has already renovated most of its mobile applications, such as Drive, Gmail, Maps, and YouTube, to conform to its interface recommendations.

Google Hangouts is a communications platform, as opposed to a discrete product. It supports instant messaging, SMS, video chat, and VoIP calling through Android, iOS, and Chrome browser clients. It competes, more or less, with Apple's FaceTime, Facebook Messenger, and Microsoft's Skype, as well as Google's Messenger app (which some users prefer for its SMS, MMS, and group chat capabilities). It also faces a challenge from Slack, which has become popular for business team communications. At the same time, Slack and Hangouts can be integrated to work together, so they're not necessarily mutually exclusive.

Hangouts 4.0 for Android is faster than its predecessors, said Google product manager Amit Fulay in a blog post, because the company's engineers have been "obsessively fixing bugs and speeding up message delivery." These optimizations also make the app less demanding of battery power, which always seems to be in short supply.

The updated Hangouts includes a redesigned Compose button, a streamlined contacts lists, and a simplified procedure for creating attachments. It now supports Outbound Caller ID with the Hangouts Dialer app, to present the caller's name to those being called. It also includes the ability to receive and reply to group MMS messages in Hangouts via Google Voice. It now also works with Android Wear devices.

Google Hangouts 4.0 for Android is available from the Google Play Store.

Thomas Claburn has been writing about business and technology since 1996, for publications such as New Architect, PC Computing, InformationWeek, Salon, Wired, and Ziff Davis Smart Business. Before that, he worked in film and television, having earned a not particularly useful ... View Full Bio
We welcome your comments on this topic on our social media channels, or [contact us directly] with questions about the site.
Comment  |
Email This  |
Print  |
RSS
More Insights
Webcasts
The Failures of Static DLP and How to Protect Against Tomorrow's Email Breaches
Protecting Your Enterprise's Intellectual Property
More Webcasts
White Papers
From MFA to Zero Trust
The Insider's Guide to IP Geolocation Data During COVID-19
More White Papers
Reports
Special Report: Edge Computing: An IT Platform for the New Enterprise
2020 State of Cybersecurity Operations and Incident Response
More Reports

Is this Google's answer to Zuckerberg's Whats App? Because if this is, it is too much, too late.
Reply  |  Post Message  |  Messages List  |  Start a Board

Do you think this Alphabet thing will have any ramifications for Google Hangouts and other Android features?

Alphabet is mostly a collection of companies. The largest of which, of course, is Google. This newer Google is a bit slimmed down, with the companies that are pretty far afield of our main Internet products contained in Alphabet instead. What do we mean by far afield? Good examples are our health efforts: Life Sciences (that works on the glucose-sensing contact lens), and Calico (focused on longevity). Fundamentally, we believe this allows us more management scale, as we can run things independently that aren't very related. Alphabet is about businesses prospering through strong leaders and independence. In general, our model is to have a strong CEO who runs each business, with Sergey and me in service to them as needed. We will rigorously handle capital allocation and work to make sure each business is executing well. We'll also make sure we have a great CEO for each business, and we'll determine their compensation. In addition, with this new structure we plan to implement segment reporting for our Q4 results, where Google financials will be provided separately than those for the rest of Alphabet businesses as a whole.
Reply  |  Post Message  |  Messages List  |  Start a Board
Editors' Choice
Hot Topics