Ten Apple products have been removed from a list of products that can be bought with Chinese government funds.

Ten Apple products, including its iPad and MacBook line, have been excluded from Chinese government procurement, reflecting deepening distrust of American technology among foreign officials in the wake of leaks that began last year about expansive US intelligence gathering.

According to Bloomberg, China's National Development and Reform Commission and its Ministry of Finance omitted Apple's products from a list published in July that specified technology products eligible for purchase with government funds. The products were reportedly present in a draft version of the list distributed in June. A month earlier, Microsoft learned Windows 8 would be ineligible for government procurement in China.

Chinese officials could not be reached for comment; Apple did not respond to a request for comment.

In May, Chinese officials said they would review foreign technology companies for potential security threats following the US indictment in absentia of five Chinese military officers for cyber espionage. That month, the Guardian reported that the National Security Agency routinely receives or intercepts technology products being shipped to customers outside the US to install backdoors for spying -- the very thing US government officials warned China's Huawei and ZTE might be doing in a 2012 report.

[Are you waiting to snap up the next, bigger iPhone? Read Apple iPhone 6 Expected Sept. 9.]

Russia, too, has reacted to disclosures about the NSA's aggressive intelligence gathering that arose from the documents leaked by Edward Snowden. The Russian government has asked Apple and SAP to turn over source code to determine whether the software contains covert spying capabilities. Microsoft began providing Russian authorities with access to its source code back in 2003. 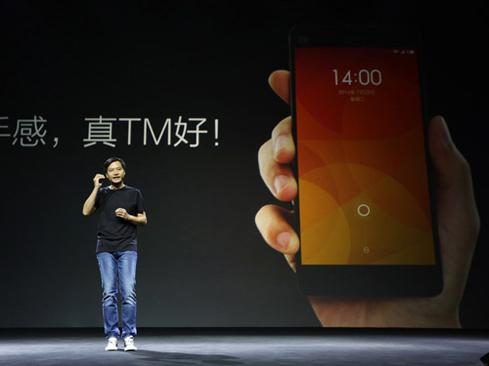 The Chinese startup Xiaomi has been criticized for copying the iPhone, which does not appear to be on the do-not-buy list.
(Source: BusinessInsider)

In Apple's recent second-quarter 2014 earnings call for investors, CEO Tim Cook emphasized the progress the company has been making in China. He said $9.8 billion of the company's $37.4 billion in revenue during the quarter came from China. "We literally did well in every single area in China."

Government contracts presumably represent only a small portion of Apple's sales in China -- the company does not disclose such figures. But ineligibility for government procurement could dampen consumer enthusiasm for its products and hinder any necessary negotiations with Chinese authorities.

US companies have had a history of challenges in China, where business policies formulated to address national interests often impose burdens on foreign companies or give Chinese companies an advantage.

Chinese government requirements present a particular challenge to companies focused on information, because authorities there consider certain information to be a threat. In 2010, Google changed its stance on censorship in China following attacks said to have originated from within the country, and the company allowed for the possibility of a withdrawal from mainland China. Two years later -- market size trumping moral indignation -- the company made moves to re-engage with Chinese consumers.

Thomas Claburn has been writing about business and technology since 1996, for publications such as New Architect, PC Computing, InformationWeek, Salon, Wired, and Ziff Davis Smart Business. Before that, he worked in film and television, having earned a not particularly useful ... View Full Bio
We welcome your comments on this topic on our social media channels, or [contact us directly] with questions about the site.
Comment  |
Email This  |
Print  |
RSS
More Insights
Webcasts
Building the SOC of the Future: Next-Generation Security Operations
ROI and Beyond for the Cloud
More Webcasts
White Papers
A Technical Deep Dive on Software Exploits
Zero Trust Evaluation Guide
More White Papers
Reports
Assessing Cybersecurity Risk in Todays Enterprises
IDC FutureScape: Worldwide Digital Transformation Predictions
More Reports

You. Any have noticed that the Chinese government made public statements that that is untrue. It's now understood that this is untrue.
Reply  |  Post Message  |  Messages List  |  Start a Board

The macdailynews.com cites Caixin Online as a source, Caixin does mention the energy-saving properties of a product as the problem, but it also mentions security concerns.

This is the exact quote:
"Meanwhile, the Global Times cited Li Wei, a national security specialist, as saying that the government might have considered the purchase costs and Apple's system compatibility along with security concerns when excluding the company from the list. Li is the director of the Security and Strategic Research Institute at the China Institute of Contemporary International Relations."
Reply  |  Post Message  |  Messages List  |  Start a Board

We trust you and your chinese govn't/friends than others. Everybody else is garbage.
Reply  |  Post Message  |  Messages List  |  Start a Board

C/net just regurgitates the same garbage that we read elsewhere. We now have official Chinese government confirmation that it's not security, and that indeed, Chinese government agencies are still allowed to buy these Apple products, and are, in actually, doing so.
Reply  |  Post Message  |  Messages List  |  Start a Board

I thought the same thing as well.  I heard that there is a big push in china for using Linux, they even have their own distribution. But I guess as powerful their economic is, they are they still need western technology.
Reply  |  Post Message  |  Messages List  |  Start a Board

Security has nothing to do with this at all. It's just that Apple didn't submit their data soon enough. It will be resolved. Now, articles are coming out with the correct information. This is why it's not always a good idea to try to be first in writing about something in this field, especially when it comes to something like this, regarding foreign governments. It's best to wait for confirmation.
Reply  |  Post Message  |  Messages List  |  Start a Board

It's just an excuse from Chinese

They said 'security' and then 'energy'

Why do they ban windows 8? If they could they'll everything from MS. It's difficult to move users away from windows world.
Reply  |  Post Message  |  Messages List  |  Start a Board

Thanks for the update.  The media needs to do it's homework.

I must also add, since I can't resist...I'm surprised by this article for the following reason.  I wasn't aware the Chinese government actually "buys" any technology from the U.S.