Android smartphones were plentiful at CES, but some of the industry's biggest players didn't show up.

CES 2015 attendees didn't have to go far to find new smartphones. More than a handful made their debut from the likes of Lenovo, Asus, and ZTE, which took advantage of the spotlight in Las Vegas to introduce their latest and greatest. Samsung and Sony, however, chose to sit CES 2015 out.

Lenovo offered two Android devices: the P90 and the Vibe X2 Pro. The P90 is significant because it is the first to use Intel's Atom 64-bit Z3560 processor and LTE-Advanced XMM 7262 modem. One reason Intel continues to trail Qualcomm in the smartphone space is because Qualcomm offers a broader array of integrated application processors and modems. The Z3560/XMM 7262 aims to fight Qualcomm head-on in that respect. The P90 features a 5.5-inch full HD display, a 4,000mAh battery, a 13-megapixel rear camera, a 5-megapixel front camera, and support for a wide range of LTE networks.

The Lenovo Vibe X2 Pro is a lesser device. It has a 5.3-inch full HD screen but switches to Qualcomm's 64-bit octa-core processor. It also includes a 13-megapixel camera with LED flash and sports a lightweight metal design. Both phones will go on sale this year, but it is unlikely they'll reach the US. (Lenovo has said it will use its Motorola brand to target US consumers.)

Asus followed Lenovo with two new Zenfones. The more impressive of the two, the ZenFone Zoom, targets the shutterbug crowd. It features a 13-megapixel main camera with a 10-element lens capable of 3x optical zoom. That's quite unique for a smartphone camera, which typically relies on digital zooming. Asus boosted the capabilities of its camera application, too, giving it a full manual mode with control over exposure, white balance, and focus. The front camera rates 5 megapixels. The Zenfone Zoom has a 5.5-inch full HD screen and a 3,000mAh battery. It runs Android 5.0 Lollipop and is compatible with the LTE network operated by AT&T. It costs $399.

The ZenFone 2 is a spec monster, featuring a 5.5-inch full HD screen with a 64-bit, 2.3GHz Intel processor inside. It is the first Android smartphone to include 4 GB of RAM and has what Asus calls Dual Channel, for twice the data transfer efficiency. Other specs include a high-end 13-megapixel camera with f/2 aperture and dual flash, a 3,000mAh battery with quick charge, and Google's Android 5.0 Lollipop operating system. It goes on sale in March for $199. 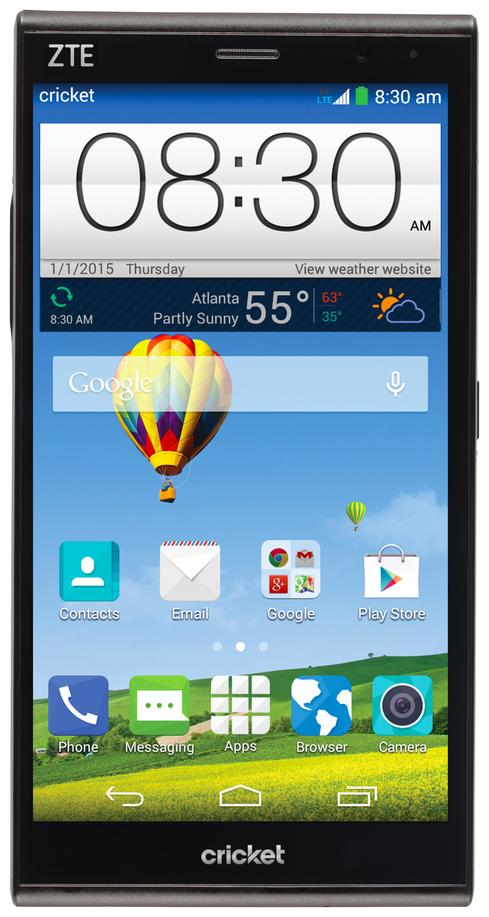 ZTE made a US-specific announcement with the Grand X Max+. This smartphone is headed to Cricket Wireless on Jan. 9 for $199.99 without a contract. The phone is an attractive handset made of two glass panels held together by a polycarbonate frame. The 6-inch display offers 720p HD resolution, and the device is powered by a quad-core 1.2GHz Snapdragon 400 processor with 2 GB of RAM. Other specs include a 13-megapixel/5-megapixel camera combination, a 3,200mAh battery, 16 GB of storage, and support for memory cards. It supports Qualcomm's Quick Charge technology and includes Bluetooth, GPS, LTE, and WiFi radios. Sadly, it runs Android 4.4.4 KitKat.

Two of the biggest press conferences of the day -- for Samsung and Sony -- failed to produce new smartphones. Both companies stuck to television sets, imaging equipment, and other devices. Samsung showed off new smart refrigerators and an interesting washing machine with its own sink for pre-washing clothes. Sony had a new Action Cam model with improved 4K video capture (complete with a cameo by renowned skateboarder Tony Hawk) and an impressive array of super-thin TVs. Sony also beefed up its wearable offerings with a new jogging headset that also acts as a fitness monitor.

Added smartphone battery life is the "want" that our readers have been voicing over and over again. Are the device makers making enough progress on this front?
Reply  |  Post Message  |  Messages List  |  Start a Board

With screens growing in size, I wonder if there will be a move toward foldable phones that allow you to enjoy the larger viewing size while still keeping the device compact.
Reply  |  Post Message  |  Messages List  |  Start a Board
InformationWeek Is Getting an Upgrade!