Startup's "revolutionary" pCell wireless networking technology, which gives each device its own discrete bubble of wireless energy to boost speed, could change industry.

"I'm here to tell you about an amazing, revolutionary new technology in wireless," declares Perlman in a video on his company's website.

The jargon comes straight out of Apple, where the words "amazing" and "revolutionary" are commonplace in company press releases.

Perlman, who previously worked at Apple, has borrowed not only the superlatives favored by Apple co-founder Steve Jobs, but also Jobs' attire -- a simple black shirt and jeans -- to convince the world that his company's pCell technology changes everything.

Former Apple CEO John Sculley meanwhile has turned to Google jargon to endorse the technology. "pCell is an authentic 'moon shot' disruptive invention, one of those rare but extraordinary moments when what previously seemed improbable in science becomes possible," he said in a statement.

If the technology works as Perlman says it does -- his old company, game-streaming service OnLive didn't live up to expectations -- it will allow mobile devices to perform as if they were connected to their very own broadband fiber network.

pCell promises network connectivity that's orders of magnitude faster than current mobile networks, limited only by the speed at which devices can receive. The promised network bandwidth can accommodate even large numbers of mobile users gathered in a small area, such as a sports stadium, without any loss of connectivity. 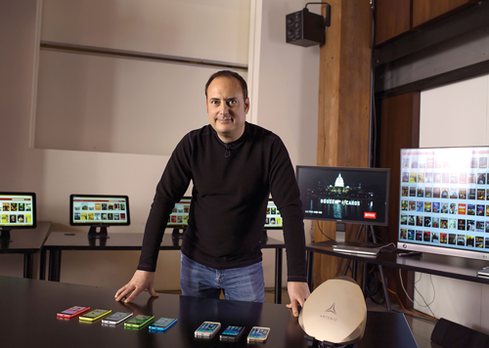 Cisco research suggests mobile carriers will have to do something dramatic to accommodate the growing number of devices. The network equipment company projects that demand for mobile data will grow 25 times by 2020. Already, mobile carriers in major metropolitan areas, where mobile devices are ubiquitous, are struggling with the limitations of current wireless technology.

pCell relies on the very thing that vexes wireless networking equipment today: interference. The technology "exploits interference," the company claims, by using radio transmissions from multiple pCell base stations to create a personal cell, or pCell, that makes a discrete bubble of wireless energy for each device. The result is supposed to be like having the mobile network all to yourself.

pCell is compatible with existing LTE devices, such as the Apple iPhone 5S and Samsung Galaxy S4, to name a few. The question is whether telecom companies, which tend to be cautious in their investments, will commit to the technology.

And if they do, what will happen to mobile pricing models, which have been built around the assumption of scarcity? With the equivalent of a reliable fiber connection in one's pocket, who needs voice service or a separate home Internet service for that matter?

The thing about revolutions is that they're seldom bloodless.


Thomas Claburn has been writing about business and technology since 1996, for publications such as New Architect, PC Computing, InformationWeek, Salon, Wired, and Ziff Davis Smart Business. Before that, he worked in film and television, having earned a not particularly useful ... View Full Bio
We welcome your comments on this topic on our social media channels, or [contact us directly] with questions about the site.
Comment  |
Email This  |
Print  |
RSS
More Insights
Webcasts
Protecting Your Enterprise's Intellectual Property
ROI and Beyond for the Cloud
More Webcasts
White Papers
IDC Workbook: Best Practices for Cloud Security
Full Body Exposure: CybelAngel Analysis of Medical Data Leaks
More White Papers
Reports
2020: Threats in Review
The State of Cloud Computing - Fall 2020
More Reports

If Artemis Networks can pull this off, we would indeed have quite the disruption.  Right now network providers, particularly Telcos, are worried about the shift of their current business from voice to data, since voice has become a commodity thanks to the shift in how people communicate.  If this indeed can change how broadband is connected, while boosting reliability and speed, it would definitely shift the way these Telcos focus their business.  Right now they really look to drive connectivity in large metropolitan areas, and tend to leave the rural areas a little behind times.  If this technology works more efficiently in denser populated areas, this means that funds for network expansion could be reallocated to rural areas.  It really does drive a win-win, provided the Telco's can get over the fear that they will be outsted in the metro areas where the majority of their customers reside.
Reply  |  Post Message  |  Messages List  |  Start a Board

Artemis's masterplan sounds perfect for those who can afford the best mobile devices and the best rate plan from the internet pipe gatekeepers. As for the rest of us, not so much.
Reply  |  Post Message  |  Messages List  |  Start a Board
Editors' Choice
Hot Topics