Apple, Samsung Back In Court - InformationWeek

0%
Tweet
Heads roll at Samsung HQ as the company appeals a $930 million judgment awarded to Apple.

Apple and Samsung will face off in court again on Thursday, continuing their dispute over smartphone patents. The two companies have been at odds since Apple sued Samsung for violating patents covering the design and other aspects of the iPhone. That case concluded with Apple winning big. Samsung, unhappy with the huge damages awarded to Apple, appealed. This marks the beginning of the appellate case.

Here's a quick refresher on where Apple and Samsung stand with respect to litigation. Apple first sued Samsung in April 2011 for violating iPhone patents. Samsung countersued. The trial didn't get underway until mid-2012. A jury found Samsung guilty of violating Apple's patents in August 2012 and awarded Apple $1.05 billion in damages. Later that year, the judge overseeing the case said the jury miscalculated the damages. The damages were not solidified until late 2013, at which time the primary case was closed. In the end, Apple was awarded $930 million.

Apple later sued Samsung again over more patents and Samsung's newest phones. Despite being ordered to mediate the case, Apple and Samsung couldn't come to terms over the issues, and that case went to trial earlier this year. Apple initially sought more than $1 billion in damages, but in the end was awarded only about $120 million. 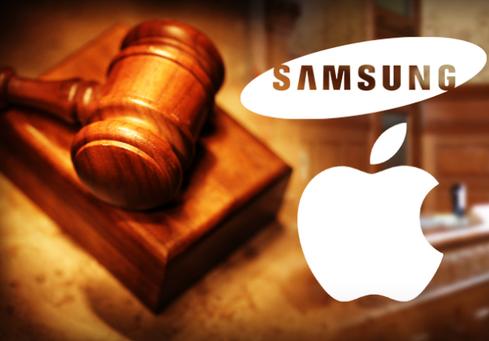 The two companies continued to pummel each other with lawsuits all around the world between 2011 and 2013. Cases were heard in Korea, Australia, Germany, the Netherlands, the UK, and Japan, among other countries. In August of this year, Apple and Samsung agreed to end all those international cases, leaving only the two US cases still on the table.

Apple and Samsung have both lined up their arguments for today's appeal. "Samsung seeks to belittle Apple's intellectual property rights and particularly Apple’s design patents, though it tellingly does not challenge the design patents' validity," Apple wrote. "Samsung also tries to downplay the extent of its mimicry, but overwhelming evidence demonstrated that Samsung faced a 'crisis of design' and addressed it with shameless copying." Samsung, on the other hand, has 27 law professors on its side to offer expert testimony. With $930 million on the line, you can be assured both companies will do their best to win.

Meanwhile, at Samsung HQ, pink slips are showing up in dozens of inboxes. The company reassesses its leadership team every year. The head of its mobile device business, J.K. Shin, was in the hot seat for his unit's 60% drop in profits during the third quarter. Samsung eventually decided to give Shin a chance to turn things around. His underlings weren't as fortunate. According to The Wall Street Journal, dozens of mid-level managers have been let go or reassigned due to the company's poor performance. While the exact number of departures isn't clear, one business unit saw as many as 15 executives relieved of their duties.

The management shuffle makes clear Samsung's intent to reinvigorate its flagging smartphone business. Though the company is on track to sell hundreds of millions of devices this year, the slowdown in sales hit its bottom line hard.

Eric is a freelance writer for InformationWeek specializing in mobile technologies. View Full Bio
We welcome your comments on this topic on our social media channels, or [contact us directly] with questions about the site.
Comment  |
Email This  |
Print  |
RSS
More Insights
Webcasts
Unlocking the Ultimate Source of Truth in Cloud Security--Network Data
SecDevOps: Tying Security to Your Application Development Processes
More Webcasts
White Papers
DevOps for the Database
SANS Guide to Evaluating Attack Surface Management
More White Papers
Reports
Special Report: Edge Computing: An IT Platform for the New Enterprise
InformationWeek & Network Computing Report Round Up
More Reports

The key word here is awarded.   Did Samsung ever actually cut a check ?


@Whoopty    Agreed.  And if I recall - some of the "design issues" are about aspects as meaningless as the shape of a button.  Give me a break !


Samsung and Apple at it again ?    Figures.   But what strikes me in this piece is once again how Asian companies hold their management accountable. One bad year and heads roll ?


While I think one bad year is a bit short but I can appreciate this method.  Would American business do this ?   This is rhetorical of course.   Because as most clearly understand American execs for the most part survive years of endless losses and poor performance.


Only to be well compensated themselves.    Only the size of the economy overcomes this unnecessary drag on the GDP.

This is the sport of kings. IP law and suits with counter-suits.
Reply  |  Post Message  |  Messages List  |  Start a Board

I swear the only people that really win out of these lawsuits are the lawyers. Both companes spend millions of dollars fighting one another, with it taking so long that any judgement won't affect sales of the hardware in question and consumers lose out too, because product development is stifled by this sort of patent court proceedings.
Reply  |  Post Message  |  Messages List  |  Start a Board
Editors' Choice
Hot Topics