In a nod to Apple's growth among enterprise users, the two companies have entered a partnership to ensure Cisco products work well with iOS devices.

Apple and Cisco on Monday announced plans to optimize Cisco networks to build "a fast lane for iOS business users."

Highlighting the popularity of Apple's mobile devices among major enterprise companies, CEO Tim Cook said in a statement that iPhones and iPads have become essential business tools. "Together with Cisco, we believe we can give businesses the tools to maximize the potential of iOS and help employees become even more productive using the devices they already love," he said.

Cisco executive chairman John Chambers in a statement described the partnership as a way to provide joint customers with improved network efficiency and reliability. 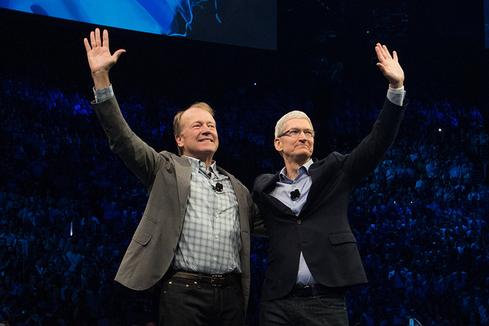 The two companies said they'll work together to make tools such as Cisco Spark, Cisco Telepresence, and Cisco WebEx function seamlessly on iPhones and iPads.

"We want to make it native for your iPhone to connect to the corporate communications network," said Trollope.

In so doing, iPhone calls at work would no longer pass over the phone carrier's cellular network. Rather, they would pass through the corporate telephony system.

Trollope said that businesses often find that the proliferation of mobile devices can tax network bandwidth. He described a scenario in which a healthcare worker might have the same bandwidth available as someone streaming videos on the network for entertainment.

"You don't want the same quality of service for cat videos," Trollope said, without addressing whether a fast lane for iOS users means a slow lane for users of other devices on the network.

The deal marks Apple's second major enterprise partnership under CEO Tim Cook. Just over a year ago, Apple and IBM entered into a partnership to promote Apple's products to enterprise customers and to develop industry-specific iOS apps.

Until the advent of the iPhone and the iPad, Apple showed little interest in courting enterprise customers. But in the past few years, the company's attitude has changed. During Apple's Q3 2015 conference call, Cook made a point of citing Apple's success in winning business customers. He mentioned broad use of iPads and iPhones at United Airlines, new customers such as Air Canada, Banorte in Mexico, and National Grid in the UK, and progress with the IBM partnership.

Cook said Apple is working with more than 40 mobility partners to deliver software and services to businesses.

With the support of Cisco and its broad partner organization, Apple may be able to reverse the downward trend in tablet sales, particularly if the long-rumored large-screen iPad becomes a reality. According to research firm IDC, Apple shipped 10.9 million iPads in Q2, down from 13.3 million in Q2 2014.

IDC anayst Jitesh Ubrani attributed part of the sales decline to the fact that tablets can last a long time without being replaced. He noted that Apple's upcoming iOS 9 includes productivity-enhancing features that may help revitalize the tablet market.

Thomas Claburn has been writing about business and technology since 1996, for publications such as New Architect, PC Computing, InformationWeek, Salon, Wired, and Ziff Davis Smart Business. Before that, he worked in film and television, having earned a not particularly useful ... View Full Bio
We welcome your comments on this topic on our social media channels, or [contact us directly] with questions about the site.
Comment  |
Email This  |
Print  |
RSS
More Insights
Webcasts
Protecting Your Enterprise's Intellectual Property
Strategies for Success with Digital Transformation
More Webcasts
White Papers
All In, Online Gaming & Gambling
Managing OTT Content Distribution in the Connected World
More White Papers
Reports
2021 Top Enterprise IT Trends
2020 Threat Hunting Report
More Reports

It sounds like we're on the same page here.  I do take some consolation in the fact that they are announcing this and that means they'll be trying to address some of the issues though.  I remember a comment from a Cisco reps years ago that cell phone call and data quality were so bad that no one really wanted to make business calls on them.  Now I'm seeing more business leaders using their cell phone as their main calling platform.  If companies with products in the telecom field don't recognize this and don't address this they are shooting themselves in the foot.
Reply  |  Post Message  |  Messages List  |  Start a Board

Both companies have a history of wonkiness in code that really leaves WLAN admins holding the bag. Cisco's WLC code has been buggy since they moved to thin architecture. Apple frequently changes their Wi-Fi behavior, and provides litte info on what changed in release notes. Apple also has a tradition of "you'll flex your standards-based network configs to accomodate OUR way of doing things", while Cisco uses features like band-steering and load-balancing that often cause as many issues as they solve. Put it all together, and there's a lot of potential for the partnership to make life rough for non-Apple clients if this partnership isn't handled carefully. Ideally, both companies would tighten their QA on WLAN-related code before any new and exciting features are unleashed.

"The two companies said they'll work together to make tools such as Cisco Spark, Cisco Telepresence, and Cisco WebEx function seamlessly on iPhones and iPads."

All I can say about this is, FINALLY!  This is one of the more irritating things about Cisco's telepresence products many people resort to using third party applications that can make the SIP or H.323 connection but then only parts of the application are even useful.  I can't even remember how long I've been fighting with half working versions of Jabber for telepresence.  I'm crossing my fingers though in the hopes that this isn't part of a new Cisco product line that will require massive upgrades though.