AOL Platforms aims to give advertisers better results, but some critics object to the editorial-like appearance of native ads.

AOL Platforms on Thursday plans to introduce a new "native" mobile ad unit that will offer marketers a way to promote the installation of apps on mobile devices.

"Native" in advertising parlance means "camouflaged." Native ads resemble editorial content, though they tend to include a label like "Sponsored." The idea is that ads that don't look like ads perform better than obvious pitches.

Chad Gallagher, director of mobile at AOL Platforms, said in a phone interview that native ads do just that. While AOL's native mobile ads prompt viewers to click about as often as traditional banner ads, post-click-through engagement is about six times higher than a display banner, he said.

That's particularly important when trying to encourage someone who clicked on an ad to then click again to initiate the download of an app. AOL says its new native ad unit reaches 86 million users per month through its various websites and through third-party publishing partners.

[Samsung's most known as a hardware maker, but sees software as the better way to compete. See Samsung's Next Frontier: Apps.]

"When something matches the look and feel and design and placement of the content people are consuming, I think they respond much better to it," said Gallagher. "It feels like it's a part of the experience."

Native ads mean different things to different people, said Gallagher. "What we're doing is allowing publishers to create an ad unit that mimics the look of their actual site." 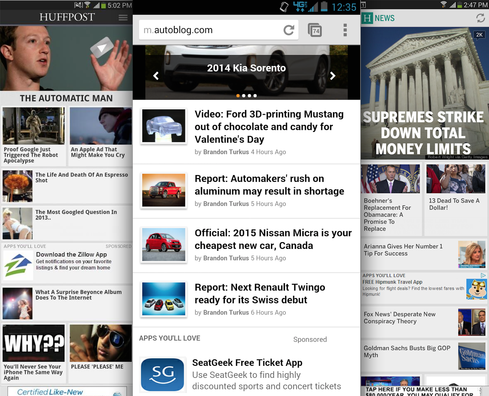 Two decades ago, when publishing industry profits had only begun to come under pressure from the Internet, it was still common to distinguish between ads and editorial. Today, the distinction is far less clear, if it exists at all.

According to a survey conducted last summer by the Online Publisher's Association, 90% of US publishers either already offer native advertising options or plan to do so this year. The practice has become commonplace enough to concern the Federal Trade Commission.

"By presenting ads that resemble editorial content, an advertiser risks implying deceptively that the information comes from a non-biased source," said FTC commissioner Edith Ramirez at a workshop on native advertising held in December.

The FTC has urged search engines to ensure that customers can distinguish between organic and paid search content. It could insist that publishers make the distinction between ads and editorial more obvious as well.

In the meantime, the mobile-driven advertising renaissance can be expected to continue. In February, Yahoo introduced Yahoo Gemini, a marketplace for mobile search ads and native ads. Twitter last week rolled out a new ad unit to drive the installation of mobile apps. Google this week updated its AdWords service with improvements to its app promotion ads, among other additions. Facebook is expected to roll out a mobile app network next week at its F8 developer conference, a network likely to build upon the data accessible through its Parse backend service. The world is going mobile and the advertising industry wants to be there.

Gallagher said that many websites still use traditional rectangular banner ads, despite the emergence of better alternatives.

"I think the opportunity to create better advertising, re-envisioned for where the medium is going, is just completely untouched," he said. "There's a massive opportunity here to do a better job."

There's also potential risk. As Bob Garfield, co-host of NPR's On The Media, put it at the FTC's workshop, "The greatest threat of native advertising is not the deception of consumers and not the unmet needs of brands; the gravest threat is to the media themselves. With every transaction, publishers are mining and exporting that rarest of rare resources, trust."

But by the mathematics that allow us add "advertising" to "editorial" and get "content," we should be able to concoct a palatable substitute for trust. Let's call it "social."

Thomas Claburn has been writing about business and technology since 1996, for publications such as New Architect, PC Computing, InformationWeek, Salon, Wired, and Ziff Davis Smart Business. Before that, he worked in film and television, having earned a not particularly useful ... View Full Bio
We welcome your comments on this topic on our social media channels, or [contact us directly] with questions about the site.
Comment  |
Email This  |
Print  |
RSS
More Insights
Webcasts
Defense and Response Against Insider Threats & User Errors
The Pesky Password Problem: Policies That Help You Gain the Upper Hand on the Bad Guys
More Webcasts
White Papers
5 Key Steps for Assessing Your Security Effectiveness
Driving Immediate Value with a Cloud SIEM
More White Papers
Reports
IDC MarketScape: Worldwide Managed Security Services 2020 Vendor Assessment
2020 Threat Hunting Report
More Reports

I've always hated the subtle and no so subtle jabs at AOL in the last few years. This is stll an excellent company that has managed to remain relevant. And it's great to see them wisely follow Yahoo. Airpush, Twitter and the whole gang of early native mobile advertising adopters. This should help breathe new life into their ad revenue models.
Reply  |  Post Message  |  Messages List  |  Start a Board

They seem to be doing a good job on advertising the native mobile ad unit that will offer marketers a way to promote the installation of apps on mobile devices. This will create a good platform for the marketers to be able to relate well with their sellers. Its a plus since it reaches up to 56million users per month through its various websites and through its third party publishing partners. This will prevent biasness of sources since it presents ads that resemble editorial content.
Reply  |  Post Message  |  Messages List  |  Start a Board

AOL bought advertising.com in 2004 so they've been in the business for a while.
Reply  |  Post Message  |  Messages List  |  Start a Board

Well, it's what every salesperson strives for - to not be conceived of as a salesperson, even though we get paid on a straight commission basis. I'm actually surprised it took the ad industry so long to come around. The other noteworthy thing about this is that it creates more work for writers, because every ad has to be rewritten for each publication it runs on.
Reply  |  Post Message  |  Messages List  |  Start a Board

I havn't heard anything about AOL in a while. I didn't know they were still around. Now they are in advertising I see. Finding more ways to advertise when it doesn't look like advertising. wondeful.
Reply  |  Post Message  |  Messages List  |  Start a Board
Editors' Choice
Hot Topics