Why Valve's SteamOS Could Be Revolutionary - InformationWeek

Valve's SteamOS and Steam Machines could have big implications for Silicon Valley and Hollywood. 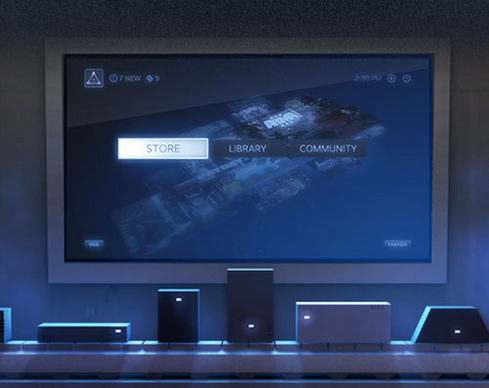 Valve is an enormously successful company. Privately owned, it has succeeded in creating Steam, the world's largest app store on Windows, based primarily on selling video games. Despite the PC industry's current double-digit decline, Valve's sales are up 76 percent year-over-year.

But ever since the introduction of Apple's iPhone, no part of the computer industry has been untouched, and Valve faces new existential threats. Valve's recent announcements of SteamOS and Steam Machines are the company's response to this changing world.

Why Valve had to do SteamOS
Valve's most immediate threat was Microsoft's entrance into the app store business. Rather than simply sticking to creating an operating system, Microsoft decided it wanted more control of the app distribution chain and the accompanying revenue. Since Microsoft controls the Windows operating system, on which Valve's business depends, Microsoft has the ability to lock out third-party players and effectively kill Valve/Steam. In fact, Windows RT mobile devices are already locked down and allow only apps from Microsoft's App Store to be installed.

In an interview with NewMediaRights.com in 2012, Valve founder and managing director Gabe Newell was asked about Windows 8 and Microsoft's direction of closing the platform. "I'm really, really worried with Windows 8; as Microsoft tries to figure out how to come up with a strategy for dealing with Apple's resurgence, and Microsoft's failure to take market share away from Google, and so on, that they're going to make a set of bets and gone down a set of paths that's going to be very bad for the rest of us."

So, Valve had no choice but to look for a contingency plan. The company turned to Linux and announced SteamOS, a Linux distribution designed for playing video games. Unlike prior Linux distributions, Valve was able to use its clout to get video card manufacturers such as Nvidia to fix their drivers to work well on Linux. (This is in stark contrast to Linux creator Linus Torvalds's expletive-laden dismissal of Nvidia, only a year ago, for their terrible drivers and lack of cooperation.)

While Linux on the desktop has failed to gain traction over the years, and the performance and support of games in Linux usually lags its Windows counterparts, Valve may actually have the resources, expertise, and discipline to finally make Linux a viable first-class gaming platform. And by doing this, Valve frees itself from being locked out by proprietary OS vendors.

Steam machines and the console wars
Microsoft's lockdown of the Windows App Store is actually nothing new to Valve; all the video game console manufacturers have locked down their consoles since the original 8-bit Nintendo. With Valve depending on video games for revenue, Valve was no doubt concerned about being locked out of the entire video game console market.

While the Windows App Store may have been the tipping point, Valve likely was already working on ways to address this situation.

SteamOS demonstrates the technical path by which Valve can free itself from Microsoft's control, but it won't necessarily encourage people to switch away from Windows. Valve's answer to this is Steam Machines, a specification with an alliance of hardware manufactures to build machines dedicated to gaming. Essentially, this is Valve competing in the console business.

Video game consoles exist in part today as an acknowledgement that a large number people prefer specialized devices that are good at video games over general-purpose computers. However, to judge by the numbers, the current business model used by the console industry is a complete failure. Microsoft has sunk billions of dollars into its Xbox division since its inception and still has failed to recoup its costs. Analyst group Nomura, breaking down Microsoft's earnings per-year, says $2 billion in losses are attributable to the Xbox platform.

Sony's picture for the PlayStation 3 is no better. Astute readers putting together Sony's financial reports from 2007 (PlayStation 3 launched in late 2006), can estimate Sony may have lost between $4 and $6 billion on PlayStation 3.

Nintendo may have escaped the dire losses suffered by Microsoft and Sony, but it is now under siege for losses with the Wii U and 3DS.

The console industry based its business model on selling proprietary hardware consoles at a loss, and recouping costs (and eventually earning a profit) through games sales. All they players have a tightly controlled ecosystem and steep SDK prices, which limit who may ship games on those platforms.

While this business model may arguably have worked in the past, there have been both major and subtle changes in the industry that have disrupted it. The biggest change was the entry of iPhone and the emergence of the mobile market. In addition, the industry just saw the longest period in history without a console refresh -- about eight years. This is an extremely long time in technology terms. It's worth noting that current iPhone and Android phones now equal, if not exceed, the current generation of consoles in terms of power.

Meanwhile, Valve, with its rising Steam revenue, has continued to demonstrate that the PC gaming market is still profitable. And the company has not had to rely on subsidizing hardware to achieve profitability.

So, as the console business model is imploding, Steam Machines offers disruption to the normal lockdown model as well as the long hardware refresh cycle time, while still potentially offering the appealing interface simplicity of game consoles. Steam Machines expose and exploit the fact that there is no longer anything special or unique about video game consoles that commodity PC parts and a specialized fork of Linux can't do too. And because Steam Machines relies on standard PC parts, it benefits from not having the R & D costs of Microsoft, Sony, and Nintendo. And though the latter subsidize their hardware, over the course of a few years, thanks to Moore's Law, it will become harder to justify buying outdated hardware when a new Steam Machine (or your next phone upgrade) will become better and cheaper while also giving you a superior gaming experience.

"The reason why the success of the iPod hasn't made OSX gain more market share is because you can't walk into WallMart and buy a Mac for 500 USD as the new family PC."

You can get an iPad and for many people that's enough PC.
Reply  |  Post Message  |  Messages List  |  Start a Board

I hope Linux (finally) makes it as a popular option. It would benefit everyone to have a viable open platform that isn't owned by Apple, Microsoft or Google.
Reply  |  Post Message  |  Messages List  |  Start a Board
InformationWeek Is Getting an Upgrade!