Online education pioneer Udacity on Wednesday said it will allow students to pay more for the developer-oriented course material it makes available for free on its website. In return, the company promises graduates a job within six months or a full tuition refund.

Available initially in the US, the company's Nanodegree Plus program will cost $299 per month, will take approximately nine months, and require an estimated 10 hours of work each week. It will be available in four tracks: Android Developer, iOS Developer, Machine Learning Engineer, and Senior Web Developer.

"Students enrolling in these programs will work closely with our Career Services team, and enroll in our new Career Advisor program and Career Concierge services," said founder Sebastian Thrun in a blog post. "In time, we plan to roll out the program to other countries and other Nanodegree tracks."

Students not interested in a job guarantee can participate in the standard Nanodegree program for $199 per month. Those completing a Nanodegree in less than 12 months are entitled to a 50% tuition refund. And those who prefer entirely self-directed learning can take the same course material on their own for free. 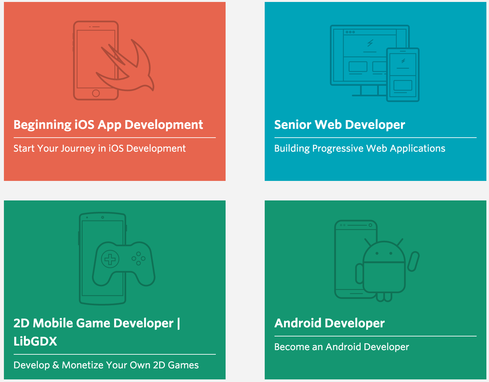 Whether the job offered will be desirable enough to ensure acceptance remains to be seen. If the guaranteed position requires the job seeker to move to a new city or state, for example, it may not be a particularly welcome offer. Not every job is a dream job.

In an emailed statement, Udacity executive advisor Shernaz Daver stressed the importance of working with students to find a suitable job. Daver said Udacity intends to work with students to make sure they "make back more than they put into the Nanodegree Plus program," adding, "We would start working with them from the beginning of the process and would know if they were open to moving or not."

Given Silicon Valley's reputation for age discrimination, there's also the possibility that older students may be more likely to get a refund than a referral. But Daver insists ability matters more than age. "Prospective employers will use the portfolio of projects built during the Nanodegree Plus program to identify qualified candidates," she said. "So grads of any age will get jobs based on what they can do, not how many trips they've taken around the sun."

Other coding bootcamps have made similar promises. App Academy, for example, uses a job-guarantee financing model. Students only pay tuition if they get a job (though it does require a refundable $5,000 deposit as an incentive to show up). The company claims 98% of its graduates get hired, without offering much clarity about the job or whether it involves coding.

[Looking for your next dream job? Check out 10 Best Tech Companies To Work For In 2016.]

Third-party sources report lower figures. In 2015, Course Report, a company founded two years ago to review and research online code bootcamps, surveyed 44 coding schools and, based on 665 responses, reported 66% of respondents said that they were employed full-time using skills learned at their respective coding schools, and that their salaries increased an average of 38%, or $18,000.

The appearance of coding schools has coincided with years of tech industry claims that there's a shortage of tech talent. Though there's undoubtedly some truth in that, there's also industry resistance to paying higher salaries for scarce skills, age discrimination, a desire to prevent technical talent from leaving for greener pastures by hiring through the H1B program, and the failure of automated recruiting systems to recognize potentially capable employees.

According to the White House, there are over half a million open IT jobs across the various sectors of the US economy. That may explain how Udacity can be so sure it can guarantee graduates a job. But Thrun, in his blog post, also noted that one of the ways the job landscape is changing is that "job tenure is shortening." Keeping an IT job could turn out to be more challenging than finding one.

Thomas Claburn has been writing about business and technology since 1996, for publications such as New Architect, PC Computing, InformationWeek, Salon, Wired, and Ziff Davis Smart Business. Before that, he worked in film and television, having earned a not particularly useful ... View Full Bio
We welcome your comments on this topic on our social media channels, or [contact us directly] with questions about the site.
Comment  |
Email This  |
Print  |
RSS
More Insights
Webcasts
Nip Ransomware in the FUD: Detecting Attacks Pre-Encryption
Cybersecurity's Next Wave: What You Should Know
More Webcasts
White Papers
Why Add Security to Your Skill Set and How to Do It
5G-Enabled Edges of Tomorrow Require Converged Network and Security
More White Papers
Reports
Enabling Enterprise Resiliency Through Cyberthreat Detection
Are We Cyber-Resilient? The Key Question Every Organization Must Answer
More Reports

Why do I feel I've landed in the middle of a Buy One Get One Free or 2 for 1 sale.

I'd rather be in a training program at Goldman.

"Online education pioneer Udacity on Wednesday said it will allow students to pay more for the developer-oriented course material it makes available for free on its website. In return, the company promises graduates a job within six months or a full tuition refund."

Thomas, it's a good model and can have a good attention from job aspirants. I think majority of students may willing to pay the higher fee because for them placement is more important.
Reply  |  Post Message  |  Messages List  |  Start a Board

I suppose it depends on what you are looking for. If you want to get into coding to beef up your resume for a different type of job or just want to figure out how to make your own app you might choose the free version. But if you want to get a job coding I'd want more info about the refund or job offer. If the job offer is a three month contract position it might not pay for the nine months of schooling and living expenses.
Reply  |  Post Message  |  Messages List  |  Start a Board
Editors' Choice
Hot Topics