CEO Jack Dorsey apologizes for past platform changes and promises to work with developers rather than against them. The company also introduced a series of enhancements to Fabric and Gnip.

At the Bill Graham Civic Auditorium on Wednesday, a block away from its San Francisco headquarters, Twitter tried to reboot its relationship with software developers and to convince them of the value of its social network and data.

Speaking at the second Twitter Flight developer conference, newly appointed CEO Jack Dorsey, who is also a cofounder, sought to rebuild trust with a developer community still wary about past slights. 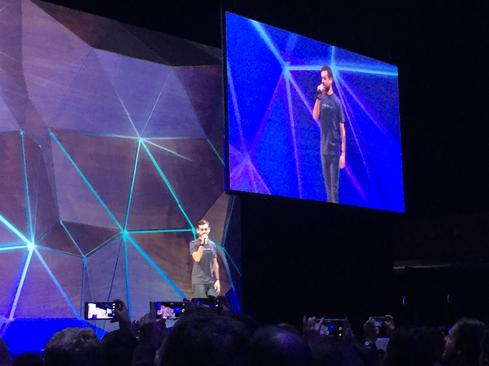 Three years ago, Twitter, without consulting its developer community, changed how developers could interact with its platform. The changes hobbled third-party Twitter clients, angered developers, and prompted complaints that Twitter's behavior was anticompetitive.

Other platforms like Facebook have alienated developers with similar missteps and have attempted to make amends with promises of platform stability and renewed focus on developers' needs. Twitter began its attempted rapprochement last year, offering the Fabric SDK (software development kit) as an olive branch.

At the time, developer Marco Arment responded with a scathing rejection of the company's overture. Similar sentiment shared through Twitter on Wednesday by developer Joël Franusic -- an image of Lucy from the Peanuts comic strip preparing to yank the football away from Charlie Brown yet again -- suggests that Twitter has more foundation work to do before it can rebuild the bridges it burned. Developer mistrust is also evident in a discussion of Dorsey's keynote on Hacker News.

But to hear Twitter's senior director of product Jeff Seibert tell it, 225,000 developers have signed up for Fabric, which is now actively used on more than one billion devices. Whatever mistrust remains won't last if Twitter's technology translates to higher app revenue.

Twitter aims to improve user engagement with Polls, a new feature that allows users to quickly create and post a simple poll in which other Twitter users can vote. It is also planning to release a new OS X client, Twitter for Mac, later this year.

To entice developers, Twitter introduced a series of enhancements to Fabric and Gnip, its enterprise social data service, as well as to its advertising platform, previously known as the Twitter Publisher Network and now named the Twitter Audience Platform.

In addition, Fabric incorporated Answers Audience Insights, a service that provides developers with demographic and interest information about the people using their apps.

Twitter Kit, part of Fabric, saw the addition of Tweet composer, a way developers can provide users with a preview of photos to be shared. It also facilitates the addition of app installation cards. A new Twitter Timeline install action provides a way to add an "Install" or "Open" button to a shared Tweet. And Twitter App Spotlight allows a business to enhance its Twitter profile with a button that initiates the download its app from the Apple App Store or Google Play.

Twitter Audience Platform has been enhanced with new creative formats, such as interstitial ads, native ads, and videos. These ads let viewers Retweet from within the ad and support customizable call-to-action buttons.

Embedded Tweets have been improved with new customization tools (Twitter Curator and Twitter Publish) and a design optimized for Android, iOS, and the Web.

Twitter's Gnip, a data reseller acquired last year, offers companies access to real-time and historical access to Twitter social data. The service includes data like the User Mention Stream (to track mentions of specific users), the Link Stream (to track tweets with a specific link), and the Compliance Stream (to track Tweet Deletes, User Deletes and Undeletes, and the like). Such social data can help fuel a variety of corporate marketing and business intelligence initiatives.

Twitter expanded Gnip with beta versions of its Audience API and Engagement API, which provide companies with data about audiences and content on Twitter. During the keynote, Chris Moody, vice president of data strategy for Twitter, highlighted the utility of Twitter as a tool for online customer service.

"Twitter is the most revolutionary communications tool of our time and we want to make sure that we continue to build it and make it great together with you," said Dorsey.

Thomas Claburn has been writing about business and technology since 1996, for publications such as New Architect, PC Computing, InformationWeek, Salon, Wired, and Ziff Davis Smart Business. Before that, he worked in film and television, having earned a not particularly useful ... View Full Bio
We welcome your comments on this topic on our social media channels, or [contact us directly] with questions about the site.
Comment  |
Email This  |
Print  |
RSS
More Insights
Webcasts
How Elite Analyst Teams are Transforming Security with Cyber Reconnaissance
Building the SOC of the Future: Next-Generation Security Operations
More Webcasts
White Papers
The Essential Guide to Securing Remote Access
Passwordless: The Future of Authentication
More White Papers
Reports
2021 Top Enterprise IT Trends
The State of Cloud Computing - Fall 2020
More Reports