50%
Tweet
Microsoft is releasing a test version of its Cortana digital concierge for Apple's iOS platform. This follows a similar release for Google Android smartphones.

This test version of the Cortana app, which can accept voice commands, schedule calendar events reminders and alarms, and has the ability to track other useful information, is only available to a handful of users at present.

The app also gives users the ability to search Bing, get directions, get info on restaurants and movie and TV listings, track your interests, as well as open other apps.

The release, reported on Twitter and in an article on TechCrunch, follows Microsoft's launch of the beta version of Cortana for Android smartphones in August, which is also only available to a limited number of users.

In both cases, potential users fill out a survey, agree to serve as testers of the app, and then receiving an email with a link leading to a download of the app.

The release of Cortana for Android and iOS is another big step in Microsoft's evolution to bring more of its technology to other platforms. At the same time, it gives users a choice and slowly decouples some services from the company's core Windows operating system product. 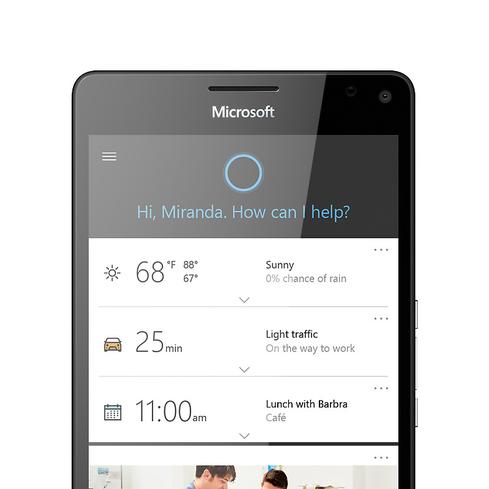 Microsoft is also busy making Office available to users of Android and iOS, and the company recently announced its Cortana Analytics Suite, launched in July, can be used with Salesforce.com.

Used in conjunction with Salesforce and Alpine Metrics, the Cortana Analytics Suite promises a way to improve the management of sales processes through voice-based interaction and visual presentation.

According to Microsoft, Cortana Analytics Suite enables real-time recommendations, customer churn forecasting, fraud detection, and predictive maintenance, among other use cases. It also connects to Salesforce data and combines it with the necessary Web services to answer queries through visualizations that weigh a variety of factors, such as geography, probability, and history, among others.

Microsoft is looking to extend Cortana's reach even further, with plans to bring the digital assistant into the automotive world.

[Read about the issues with Microsoft's November update for Windows 10.]

The announcement is part of Microsoft's larger "Windows in the Car" strategy, which is seen as a competitor to Apple's CarPlay technology and Google's Android Auto platform.

While Microsoft is broadening Cortana's reach, Apple is simultaneously working to deepen the user experience with Siri.

The company reportedly bought UK startup VocalIQ in September, which builds speech-processing technology. Its software is designed to facilitate more natural communication between humans and computers.

VocalIQ claims the most successful assistant will be a self-learning multi-domain system that can hold a conversation with people about hotel bookings, movies, restaurants, and music. Perhaps it will help Apple create such an assistant in Siri.

Nathan Eddy is a freelance writer for InformationWeek. He has written for Popular Mechanics, Sales & Marketing Management Magazine, FierceMarkets, and CRN, among others. In 2012 he made his first documentary film, The Absent Column. He currently lives in Berlin. View Full Bio
We welcome your comments on this topic on our social media channels, or [contact us directly] with questions about the site.
Comment  |
Email This  |
Print  |
RSS
More Insights
Webcasts
The Changing Face of Threat Intelligence
[Virtual Event] Doing More IT With Less
More Webcasts
White Papers
Getting The Right Cloud Management
Why Now Is the Time for Security Validation
More White Papers
Reports
2020 SANS Cyber Threat Intelligence (CTI) Survey
The Definitive Guide to Managed Detection and Response (MDR)
More Reports

@MobileAPPtelli -  iOS Application Development - iOS is one platform that has given a whole new definition to the word technology which can be used on a variety of Apple gadgets such as Iphone, Ipad and Ipod Touch. MobileAPPtelligence [dot] com, an award winning web and iOS application development company, develops world-class intuitive iOS applications to keep the clients ahead of the curve.

Thank you for your comment. It'll be very interesting to see how Cortana and Microsoft evolve in the smartphone market. I myself will definitly be benefited from having Cortana available between platforms, guess we just need to wait and see if this leads to any improvement to Microsoft's bottom line.
Reply  |  Post Message  |  Messages List  |  Start a Board

Having already said that I wouldn't like them to move into a direction such as this, I forgot to take into account that they are making a one-for-all application platform to make the windows store diverse, so I think this is natural.
Reply  |  Post Message  |  Messages List  |  Start a Board

I wouldn't want Microsoft to necessarily move into this direction, but hey, I don't run the company. Nevertheless I think the Cortana, she is amazingly user friendly and very intelligent. Siri may be faster, but that is only because Siri does not give an in depth information. Cortana does that. So if I ask Cortana what is the weather is like, it will give me a 7 day lookout into the weather. Pretty cool.
Reply  |  Post Message  |  Messages List  |  Start a Board

I have to give it to microsoft, they are definitly pushing forward and really trying to make there own path in this already very convoluted and highly competitive arena.

I really like Cortana, and the fact that it might be available on my phone is a huge plus, since it would be great if I can seamlessly integrated my Iphone with my Windows PC... it's just plain Cool!

What I don't know if this is the right track for Microsoft? I mean.... if you have one of there main products available acrross platforms (which is great), doesn't that take away from there own smarphone business? Users won't be compeled to get Windows Phones since they'll be able to use there own Android/Iphone with there Windows PC (again.... which is great as the end user)

So I"m not really sure... what does the community think?
Reply  |  Post Message  |  Messages List  |  Start a Board

With Siri being a native program, Cortina will just be a total waste of system resources, this "innovation" is quite pointless.
Reply  |  Post Message  |  Messages List  |  Start a Board
Editors' Choice
Hot Topics