Microsoft released its first batch of Office for iPad updates on Tuesday, only 33 days after the highly anticipated software suite launched. Key additions include the ability to print directly from the apps, a function that had been one of the software's most surprising omissions.

In a blog post, Microsoft said printer support was customers' most-requested item, and touted the speed with which it delivered the update. All Office for iPad users can now read and print documents, but, as before, only those with Office 365 subscriptions can create and edit Word, Excel, or PowerPoint files.

Users can wirelessly print Office documents using Apple's AirPrint feature. In Word, users can print documents with or without markups. As in the desktop version, users can print the entire document, a single page, or a range of pages. Excel likewise also lets users select a single worksheet or an entire spreadsheet, and PowerPoint lets users print single slides.

PowerPoint users also gain SmartGuides, which helps users line up pictures, shapes, and textboxes. Other additions include AutoFit in Excel, which lets users adjust the width of multiple rows or the height of multiple columns. Microsoft also promised bug fixes and stability improvements.

Many were startled by the initial lack of printer support. However, printer sales have declined over the last few years. Ironically, devices like the iPad have facilitated the move away from paper. It might make little sense to print a 100-page PDF when a tablet can access and beautifully display several thousand such documents. But paper still has a place, as demand for the new Office features attests. 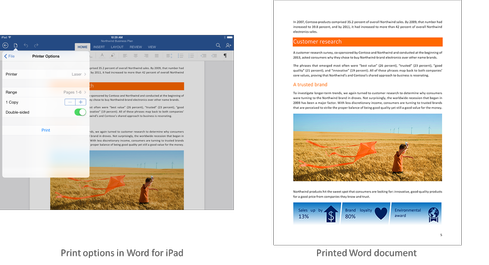 Aside from the printing omission, Office for iPad has been otherwise well-received. Some commentators dismissed the apps as too little, too late. But critics mostly praised Office for iPad, which generated more than 12 million downloads in its first week.

Microsoft hasn't said how many of the 12 million downloads have turned into new subscribers (who pay to be able to create and edit documents), but the apps arrived at the end of a strong quarter for Office 365. 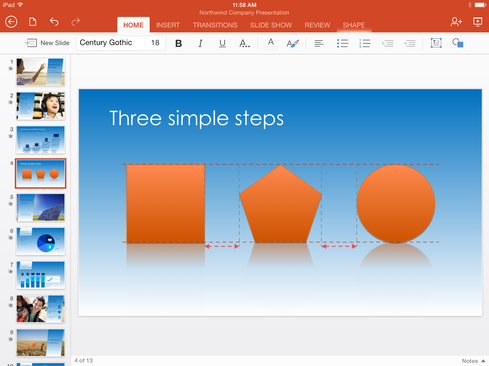 Last week, Microsoft execs said Office 365 helped push Windows Azure, the cloud platform on which Office 365 sits, to 150% year-over-year revenue growth. The company also reported that Office 365 is on pace for $2.5 billion in annual revenue, and that  Office 365 Home now boasts 4.4 million subscribers. Hoping to build on this momentum, Microsoft recently announced Office 365 Personal. It starts at $6.99 per month, supports one tablet and one Mac or PC, and has been widely perceived as a play for iPad users.

In touting the speed with which Microsoft now issues updates, Tuesday's blog post reiterated themes Office execs have trumpeted over the last year, as the company built out its Office 365 offerings. Last week, Microsoft CFO Amy Hood tied the rapid-release cycle to the company's future prospects, noting Microsoft will succeed only if it continually improves products.

Michael Endler joined InformationWeek as an associate editor in 2012. He previously worked in talent representation in the entertainment industry, as a freelance copywriter and photojournalist, and as a teacher. Michael earned a BA in English from Stanford University in 2005 ... View Full Bio
We welcome your comments on this topic on our social media channels, or [contact us directly] with questions about the site.
Comment  |
Email This  |
Print  |
RSS
More Insights
Webcasts
How Elite Analyst Teams are Transforming Security with Cyber Reconnaissance
Building the SOC of the Future: Next-Generation Security Operations
More Webcasts
White Papers
Improving Your Enterprise's Protection With Cyber Resilience
The Insecure State of Microsoft Teams Security
More White Papers
Reports
The State of Cloud Computing - Fall 2020
Special Report: Understanding Your Cyber Attackers
More Reports

This looks more like MS Office reader on iPad - without Office 365 subscription, you cannot do real editting. This somehow reveals MS strategy - facilitate the power of cloud computing in the backend and provide various access methods: web, mobile...
Reply  |  Post Message  |  Messages List  |  Start a Board

@jgherbert: You just described my main problem with the Mac OSX platform.

The screen gets littered with so much crap, the Mac monitor becomes about as functionally effective as a PC monitor a full size smaller.
Reply  |  Post Message  |  Messages List  |  Start a Board

@jgherbert: I do know what you're saying -- although, personally, I like to think of myself as a power user with a "regular person" mentality.  In any case, I do feel that UI changes like the ribbon tend to hurt the power users most while at the same time making it more difficult to become a power user.

(My favorite case in point -- the leap from MS-DOS 6.x/Windows 3.x to Windows 95/98.  I have fond memories of the days of MS-DOS when I knew *EVERYTHING* about my computer (and the few things I didn't know were easy and fun enough to experiment with and find out -- sometimes at the risk of very easily accidentally destroying everything, sure, but still).

I want UI changes to be a very clear improvement -- or, at least, not a clear detriment (beyond getting used to change).
Reply  |  Post Message  |  Messages List  |  Start a Board

That said, users of Office 2011 for Mac really got the short end of the stick on the ribbon.

Above that it has a bunch of common function icons.

Above that is the standard Menu Bar that I suspect is mandatory for all Mac apps.

Figuring out where stuff is just kills me. And, naturally, the ribbons are not the same as those in Word 2007 onwards. That would just be too easy. And you can't use the VB.Net tools to write custom ribbons because that is not supported on OSX. Yay.
Reply  |  Post Message  |  Messages List  |  Start a Board

I wasn't keen on the ribbon at first; I'm what I guess would be called a power user, so my life revolves around ALT-menukey shortcuts, and the ribbon hides things in STUPID places. More specifically, it is focused on providing functionality to regular users (which is fine if you're one of them) and thus makes it more difficult for people who actually know how to use Word properly. That sounds arrogant I suspect, but I promise that any power users will recognize what I'm saying - perhaps including yourself, Joe!

That said, the ability to code a customized ribbon has allowed me to write specialized tools to support templates and put all the best things in one place. It's simple stuff, all in VB.Net, and nothing I could do anywhere near as nicely in Word 2003.
Reply  |  Post Message  |  Messages List  |  Start a Board

Eh.  My favorite version of Office was '97.  Dagnabbit.


"Which most assuredly points to a market niche that possesses more money than brain matter since it is an indication of a willingness to be nickel/dimed to death."

Well, it points to Microsoft wanting to encourage people to move to a subscription-based model. Now, perhaps I have more money than brain matter, because I have an Office365 subscription. For $100 a year, I can install the full office suite on 5 computers (Mac or Windows) plus 5 mobile devices. Oh sure, it sucks to pay for that each year rather than having the software in perpituity, but then it's working out as a good deal for me because I'm able to use all those licenses, and it's sure as heck cheaper to pay for that and always have the latest version than to screw around like I have in the past and have different machines with different versions of Office running on them, depending on which versions I can upgrade at any time.

Of course, your situation may be different to mine. But I evaluated it, and with my big wallet and stupid brain, I decided it was the right choice for me.

"All Office for iPad users can now read and print documents, but, as before, only those with Office 365 subscriptions can create and edit Word, Excel, or PowerPoint files."

Which most assuredly points to a market niche that possesses more money than brain matter since it is an indication of a willingness to be nickel/dimed to death.
Reply  |  Post Message  |  Messages List  |  Start a Board
Editors' Choice
Hot Topics