The newest version of Android -- Lollipop -- is catching on slowly, and Microsoft had something to say about Google's mobile operating system.

8 Android Security Concerns That Should Scare IT
(Click image for larger view and slideshow.)

Perhaps Microsoft ought to remember the story about stones and glass houses.

Delivering the latest operating system to smartphones isn't an easy thing. Apple, Google, and Microsoft aren't the only ones with skin in the game. The complex ecosystem puts numerous roadblocks in the way. All things considered, it's amazing how swiftly some system upgrades are adopted.

Apple's mechanism for delivering new versions of iOS to iPhones and iPads is to be lauded. The company generally makes updated iOS versions available to all users at the same time -- regardless of carrier or (to a lesser extent) device. The company made iOS 8 available in September. Since then, adoption just recently reached 81% in the shadow of the Apple Watch launch.

Apple has at least one more major iOS 8 update to provide before it focuses on iOS 9. That update, iOS 8.4, is already in beta and expected to reach consumers soon.

Google's methodology isn't quite so neat. In fact, it's downright messy. 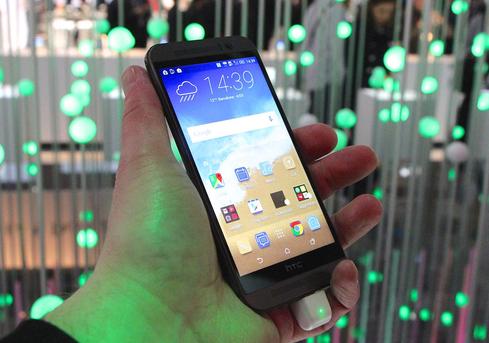 HTC's new One M9 is ready for Lollipop.

Google doesn't have a central system for delivering system updates en masse. Instead, it relies on its handset and carrier partners to push the OS upgrades to end-user handsets. Each device requires its own rendition of the update for each carrier selling the device. Not only does Google need to approve the code, but so do the handset OEM and the carrier. The process isn't a swift one.

This is why, six months since its release, Android 5.0 Lollipop represents just 9.7% of Android devices accessing the Google Play Store. It's clear the increase in Lollipop's adoption rate comes from the recent wave of flagship devices that ship with Lollipop from the onset, rather than from carrier-distributed updates -- think HTC's One M9 and Samsung's Galaxy S6 and S6 Edge.

Older versions of Android continue to hold a firm place in the rankings.

"Google ships a big pile of … code, with no commitment to update your device," said Myerson at Microsoft's Ignite conference in Chicago this week. "Google takes no responsibility to update customer devices, leaving end-users and businesses increasingly exposed every day they use an Android device." (Some older versions of Android are less secure than newer versions.)

Myerson might want to look at Microsoft's updating history, however, which is hardly a friendly one.

Microsoft broke everything with Windows 8.0. Devices running Windows Phone 7.5 and earlier were trapped with those older systems, left unable to get the newest code. Fast forward a couple of years, and now we're looking Windows 10 in the face. As with the Win8.0 update, not all phones can install the Windows 10 code. Those that can require a Microsoft Insider account. There's no word from Microsoft -- or its carrier and handset partners -- about how the existing base of Windows handsets will upgrade to Windows 10 once it is officially available.

It should be clear by now that cramming the latest code into existing smartphones is no easy task. None of the distribution models is perfect. The good news is, perhaps, that those who want the latest code can usually find it one way or another.

It goes without saying that enterprise employees should only use corporate-approved system updates.

Eric is a freelance writer for InformationWeek specializing in mobile technologies. View Full Bio
We welcome your comments on this topic on our social media channels, or [contact us directly] with questions about the site.
Comment  |
Email This  |
Print  |
RSS
More Insights
Webcasts
Detecting and Preventing Insider Data Leaks
Optimizing App Performance in the Cloud
More Webcasts
White Papers
Why Add Security to Your Skill Set and How to Do It
New Cybersecurity Paradigm
More White Papers
Reports
Accelerate Threat Resolutions with DNS
Intelligent Outcomes Are Key to Business Resilience
More Reports

Yes, Apple controls the hardware and Google does not in most cases. I have a Nexus 7 LTE and still wait for 5.0 to come through OTA. And that although there is already 5.1 and later available. I looked into sideloading 5.0, but the process is cumbersome and might just brick my tablet.

I would find less fault in Google's approach if they didn't cut all support for 4.3 and below. And a company the size of Google and with so much financial power ought to be able to get new major versions rolled out faster.
Reply  |  Post Message  |  Messages List  |  Start a Board

Remember that Apple controls the hardware and software, whereas Android has to be deployed on tens (possibly hundreds) of different hardware variants. That makes Apple's rollouts easy, as they have only a few pieces of hardware to work with (really two, iPads and iPhones - iPods now are pretty much iPhones with no radio). That makes a HUGE difference in easy of rollouts. So in the case of this story, one of Android's strong points (on multiple vendors, majority of marketplace) is also its Achilles' heel.
Reply  |  Post Message  |  Messages List  |  Start a Board

Apple controls the hardware, that is why upgrades are easy, they can test all hw versions in-house before updating. I don't own a nexus, but I would think updates are frequent and smooth on the devices google has full control over.

Most of the android vendors modify the OS before they release it, adding custom UIs etc, like HTC. This is much harder to control.

I have both an iphone and a droid, both are just ok, both hang. Apple updates have been smooth, but I never notie any benefit, other than a new apple watch icon I didn't ask for.

I thought microsoft was more controlling of the platform, no customizations, so I would have thought they would have better updates.
Reply  |  Post Message  |  Messages List  |  Start a Board

Microsoft is in no position to criticise anyone with regard to software updates. They should think back to the Win 8 fiasco because it is just the latest example of just how bad an operating system and its rollout can be. Vista was bad and some people still remember ME, but nothing tops 8 for sheer incompetence.

Having said that i just downloaded Lollipop on my S4 and it functions just fine. It appears to drain my battery a bit faster but otherwise it seems solid. The one area i would criticise Android is the amount of bloatware that you cannot get rid of on the phone. iOS does not seem to have any of that-or at least maybe the IT department removed it from my company phone. And why should the carrier dictate when you can update the operating system? I do like Apple's way of updating much better.
Reply  |  Post Message  |  Messages List  |  Start a Board

And what commitment did you make to upgrade the billion personal computers that were running Windows XP when Vista, 7 and 8 were released?  Isn't this the pot calling the kettle black?
Reply  |  Post Message  |  Messages List  |  Start a Board
Editors' Choice
Hot Topics