11 comments
Comment Now
Apple packed a lot of changes into iOS 9, now available for iPhone and iPad. Here's your guide to navigating the new system. 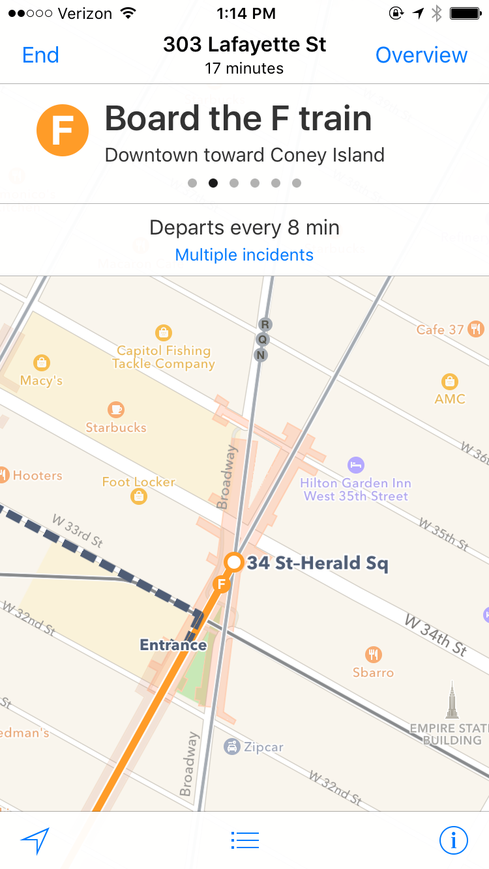 Much to the joy of city dwellers, Apple Maps will now include directions for navigating public transit systems. We already have this in Google Maps. However, Apple has further simplified directions by telling you how to access specific trains and buses. At launch, the transit feature will only accommodates 10 major cities: New York City; Baltimore; Philadelphia; San Francisco; Washington, DC; Chicago; Mexico City; Toronto; Berlin; and London.

It took 8 years &  releases for Apple to change the case of alphabets shown! Beats me why it took Apple so long to fix this basic UI mess.

Afterall it was not a hard painted laptop keyboard.
Reply  |  Post Message  |  Messages List  |  Start a Board

I updated both my iPhone 6+ and iPad Air without a problem withing a few hours of the release. No glitches and the update has been seamless. The Notes feature is a handy upgrade but it is not intuitive which is surprising. Once you get the hang of it, things go well. The search screen is good but i wish i could control the content that appears. Same thing with News. I found RSS readers to be better because you can precisely control what information will appear in the reader. In News it tends to be more general.
Reply  |  Post Message  |  Messages List  |  Start a Board

Yeah that is very odd. It's a remnant of that stubborn streak that Jobs had.
Reply  |  Post Message  |  Messages List  |  Start a Board

So they basically went and slapped on Samsung Galaxy S6 features on their iOS 9. I call it revolutionary.
Reply  |  Post Message  |  Messages List  |  Start a Board

Having said that I couldn't be much happier about the new iPhone because of its 3D touch and other things. Keyboard or not, iPhone is a great device but not entirely bug free. iOS 8 was utterly dumbed down. Thanks to iOS 9 times are a-changing.
Reply  |  Post Message  |  Messages List  |  Start a Board

One of iOS 9's big additions for me is the ability to add an ad blocker to Safari. I'm so tired of the multi-layered giant ads that I get when I go to various web sites with Safari. This gives you a way to combat that. Just go to "Content blocking" in Safari's settings and turn this on. Then you can add an ad blocking app from the app store.
Reply  |  Post Message  |  Messages List  |  Start a Board

since i have uploaded I0S 9 in my apple phone 4S, it is observed that keywords arei very small. and after

loading I0S 9 my Phone apps is hannged. let me know in the matter

Have you upgraded to iOS9? Whats your experience? I want to learn from users like you, before I upgrade my iPad.
Reply  |  Post Message  |  Messages List  |  Start a Board

> One of iOS 9's big additions for me is the ability to add an ad blocker to Safari.
> I'm so tired of the multi-layered giant ads that I get when I go to various web
> sites with Safari. This gives you a way to combat that. Just go to "Content blocking"
> in Safari's settings and turn this on. Then you can add an ad blocking app from the
> app store.

I think a similar feature was also in iOS8. There's a button on top bar in each browser window. You can view it in full content mode (ads included) or in simpler mode (without ads and graphics). I've tried it and it switches seamlessly.
Reply  |  Post Message  |  Messages List  |  Start a Board

Unless ad blocking is automatic, I won't be using it *smile*. The point is that I can go to a page, and there is the information I was looking for (or not), and it isn't overlayed by 2 or 3 large ads that I have to remove. If ads were less intrusive, I wouldn't care, I could just ignore them. And there is the "Atomic" browser that's been around for a long time that removes ads. It costs a nominal amount, but iOS doesn't allow the level of integration for a third-party browser that Safari gets by default (like being used for email links).

Oh yeah, I also got it a little wrong in my original posting. You need to find and install an ad blocker app, and then the "content blocking" setting becomes available in Safari's settings. Then you can enable the ad blocker as a content blocker. One of the ad blockers that I tried used a VPN, a different approach that raised some serious privacy issues, and for that one you didn't have to touch Safari's settings.

I really don't want to stop people who're paid to create or deliver ads from earning a living. However, the people that create ads are trying to make them eye-catching, which to them, means intrusive to purpose of the web site that's used. If some restraint was shown by the ad writers, and they didn't use overlays or flashing stuff, or whatever, I could easily live with ads. I already do live with ads in some contexts, and it isn't a problem. So it's one of those cases where these guys bring this on themselves. It seems like when there are no limits, these guys just go crazy competing with each other to see who can come up wtih the most intrusive ads.
Reply  |  Post Message  |  Messages List  |  Start a Board
Page 1 / 2   >   >>
Editors' Choice
Hot Topics

Dark Side of AI: How to Make Artificial Intelligence Trustworthy Guest Commentary, Guest Commentary,  9/15/2020
White Papers
2020 Gartner Market Guide for Network Detection & Response
How You Can Evaluate Your Org's Cybersecurity Readiness
5 Essential Steps for Enterprise Application Security
How to Secure Applications 'On the Move'
How Lockheed Martin Deployed Privileged Access Management in Just One Day