Apple fortified iOS 9 with so many features, we're still discovering them. Here are 10 more tricks for iPhone and iPad users. 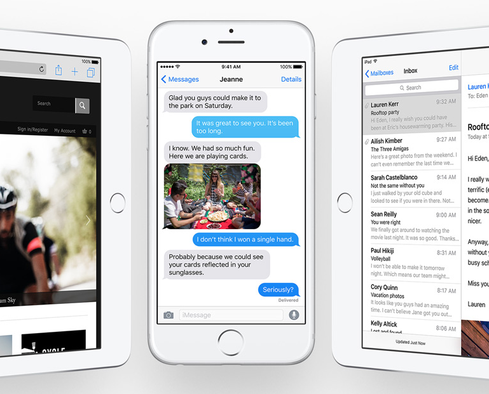 It has been almost two weeks since Apple released the full version of iOS 9 on Sept. 16, and users are still exploring its new features for iPhone and iPad.

This software update has undergone the fastest adoption of iOS, and Apple claims more than 50% of devices are already using the new OS. The popularity was expected; at 1.3GB, it's accessible to a broader range of devices and doesn't take long to download.

Philip Schiller, Apple's senior vice president of worldwide marketing, reports iOS 9 is "off to an amazing start" and "on pace to be downloaded by more users than any other software release in Apple's history."

Those who can successfully download and launch iOS 9 sans issues have lauded Apple's work. The new mobile OS is still getting a lot of hype, which is interesting given none of the new features are very exciting.

Apple has put the spotlight on a few key capabilities. A more proactive Siri, customizable Apple News app, new productivity capabilities for iPad, and public transit instructions for Apple Maps are all among the major updates in iOS 9.

Based on a few days of constant use, it seems the success of iOS 9 will not be driven by a couple of flashy new apps. Rather, users will more likely appreciate the myriad subtle tweaks that combine to create a better mobile experience.

iOS 9 arrived just in time for the public release of the iPhone 6s and 6s Plus, which both went on sale on Friday, Sept. 25. Pre-orders for the new iPhones indicate a strong demand for devices that will deliver 3D Touch, a 12MP camera, and improved speed.

Whether you're using iOS 9 on a nifty new iPhone 6s or an older iPhone 4s, there may be a few features you miss. Here we explore ten more handy capabilities you'll find in iOS 9.

Thank you very much for the great article... some of the items you highlighted I was unaware off...thanks

Apple's iOS is getting polished with every new iteration, and every time it's adding more value. With this iteration, they seem to really pay attention to features that are available on other platforms (like attachments, which have been available in Android devices), so the gap is shrinking.

The hardware features are also a huge welcome (the force touch is really handy in my opinion, saves a lot of time and it's very helpful)
Reply  |  Post Message  |  Messages List  |  Start a Board

Not interested in getting automatically switched from wifi to cellular. I have limited cell data per month (as do a lot of people). I'd rather wait until I have better wifi in a lot of cases, than use up my cell data on non-essential uses. So I'll never use this. Got to wonder how many people have a high enough cellular data limit to make this useful? Just make the wireless on the Apple mobile devices work better, that would make me much happier.
Reply  |  Post Message  |  Messages List  |  Start a Board
Editors' Choice
Hot Topics