Apple released iOS 7.1 this week for the iPhone, iPad, and iPod Touch. It marks the first major update to Apple's smartphone and tablet operating system since iOS 7 was released last September. The update improves performance of Apple's devices across the board. Here's what's new.

First and foremost, iOS 7.1 targeted a major bug. The bug in question would perform a random soft reset of the smartphone or tablet while it was in use. If you were writing an email, it would be lost. If you were browsing the web, your browser history would be wiped clean, and so on. It was an aggravating bug that spawned pages of comments on Apple's support website. After using the updated operating system for several hours, it appears that the bug has been squashed. Thank goodness.

In terms of new features, there are plenty. Apple improved Siri, its personal assistant, by making it possible to manually control when Siri listens. Users can press and hold the home button while they speak, and release it when they are done speaking. Siri will still actively listen for voice commands if users wish. Siri also gained several new male and female voices for Mandarin Chinese, Australian and UK English, and Japanese.

Apple tweaked iTunes Radio in order to make it easier for users to make purchases. For example, listeners can buy albums from the Now Playing screen, as well as subscribe to iTunes Match directly from their mobile devices rather than only from iTunes on a PC. Apple moved the search field above the Featured Stations listing so users can more quickly search for stations.

Apple added features to both the calendar app and the accessibility tools. Users can display events in the month view, as well as add country-specific holidays in their calendars. The expanded use of bold font on the keyboard and new options to display button shapes and darken app colors should make iOS devices easier to see for those who have limited eyesight. 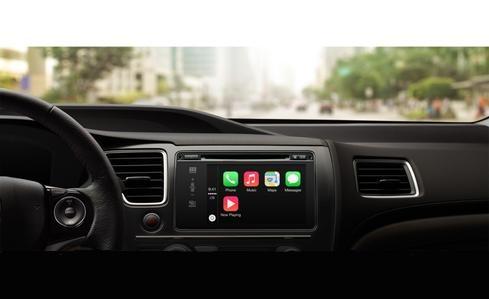 iOS 7.1 adds CarPlay, which Apple announced last week, to Apple's smartphones and tablets. CarPlay will let iPhone users integrate their devices with select cars. CarPlay supports Siri, mapping, messaging, and music. Installing CarPlay now is akin to loading the cart long before the horse has even woken up, as cars with CarPlay support on board aren't expected until late in 2014. The feature will sit idle until then.

Other additions include: an automatic HDR mode for the iPhone 5s; iCloud Keychain support in more countries; FaceTime call notifications that sync across devices; improved TouchID for the iPhone 5s; and significant performance improvement for iPhone 4. Users should also notice improved transitions between applications, which are faster and smoother. The whole operating system feels a little bit quicker on its feet, and there are refinements sprinkled throughout.

iOS 7.1 varies in size between 250 MB and 325 MB, depending on what device you have. The download and installation process, which can be done over WiFi, takes about 10 minutes. There have not been any reports of significant problems with the OS, but cautious users might want to back up their devices before installing the new operating system.

Must say I'm nervous about upgrading. Last time I upgraded my daughter's Mac -- in Nov/Dec 2013 -- it was the last straw for the logic board; the computer keyboard/mouse stopped working, despite repeated downloads and several calls and excellent help by a localish Apple reseller. Apple's service was great: For some reason, even though I'm neurotic about buying extended care for big electronics purchases, I hadn't bought Apple Care and it would have cost $600 to fix the Mac, whose warranty had expired 1 week prior. Yeah, figures! Apple allowed me to buy the warranty (about $200) because I'd actually called for service earlier in the covered period and they had not offered me the coverage at that time (or really addressed my problem).

Reading through InformationWeek and weighing the upgrade pros and cons.... although I know we'll have to upgrade it sooner or later.
Reply  |  Post Message  |  Messages List  |  Start a Board

This update isn't about FaceTime but you raise an interesting question. What are the best FaceTime alternatives, for Android users?
Reply  |  Post Message  |  Messages List  |  Start a Board

The bug fix is good news. My phone shut down out of nowhere a number of times, which drove me crazy. Glad to see that (seems) to be resolved.
Reply  |  Post Message  |  Messages List  |  Start a Board
InformationWeek Is Getting an Upgrade!