Oracle's copyright lawsuit against Google over Android now returns to a lower court.

The US Supreme Court on Monday declined to hear Google's argument to overturn a federal appeals court ruling that Oracle's Java APIs qualify for copyright protection.

The case now returns to a lower court to determine whether Google's use of Oracle's copyrighted APIs can be excused as fair use.

The Supreme Court's rejection of Google's appeal represents a major victory for Oracle, which in 2012 saw its patent claims against Google rejected and its copyright claim invalidated. After the jury in the case deadlocked over whether Google's use of Java in Android qualified as fair use, US District Court Judge William Alsup ruled that Oracle's Java APIs were not protected under copyright law, a decision that echoed a similar finding in a different case by the Court of Justice of the European Union.

But Google's victory did not last. The US Court of Appeals for the Federal Circuit in Washington reversed Alsup's decision in May 2014. And now the Supreme Court has refused to review that ruling.

"Today's Supreme Court decision is a win for innovation and for the technology industry that relies on copyright protection to fuel innovation," said Oracle general counsel Dorian Daley in an emailed statement.

Google did not respond to a request for comment.

A group of intellectual property professors concerned about the case argued in a brief that the Supreme Court should consider Google's appeal to ensure ongoing software innovation. "Unless reversed, [the Federal Appeals Court decision] is likely to have a chilling effect on the willingness of software startup firms and open source developers to create innovative programs that can be executed on incumbent firm platforms," the group argued.

Mike Godwin, general counsel and director of innovation policy for R Street Institute, a free market think tank that has received funding from Google, said in an emailed statement that contrary to the Federal Circuit decision, APIs should not be copyrightable. "APIs are more like functional descriptions, like the recipe for your favorite dish, than they are the kind of creative expression that copyright law is designed to protect," he said. 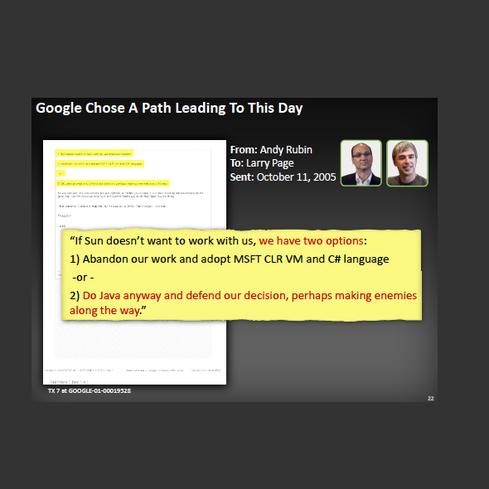 If Google manages to convince the lower court hearing the case to accept its incorporation of Java APIs in Android as fair use, it will escape unscathed, apart from the cost of the litigation. But interested parties like the Department of Justice have asserted that Google's fair use argument is undermined by its decision to make Android incompatible with the Java platform. Interoperability represents one reason that copyright infringement in software might be allowed as fair use.

Google could settle with Oracle, which presumably would end up with Google paying a significant sum – Oracle initially sought a billion dollars in damages – and negotiating a license from Oracle to continue to use its intellectual property. But it's unlikely Google will give Oracle that kind of leverage over Android unless it has no other options.

Google has already take some steps to distance itself from Oracle going forward. Android's recently introduced ART virtual machine, for example, appears to be an escape from its previous Dalvik virtual machine, which Oracle claimed infringed its patents. Google may have further technical changes prepared, though any such alterations to Android would not address past infringement.

Google's predicament appears to be one of its own making. Florian Mueller, an intellectual property blogger who has worked as a consultant for Oracle, argued that, had Google chosen to release Android under the GPLv2 license that governs Java, it might have had a stronger argument for its use of Oracle's Java APIs. However, by doing so, Google would have ended up with less control over Android's evolution. Instead, Google published Android under the Apache license, for reasons that it explains, such as appeasing device makers who don't want to abide by GPLv2 license requirements. The price for that decision could be significant.

Thomas Claburn has been writing about business and technology since 1996, for publications such as New Architect, PC Computing, InformationWeek, Salon, Wired, and Ziff Davis Smart Business. Before that, he worked in film and television, having earned a not particularly useful ... View Full Bio
We welcome your comments on this topic on our social media channels, or [contact us directly] with questions about the site.
Comment  |
Email This  |
Print  |
RSS
More Insights
Webcasts
Securing and Monitoring Networks in the 'New Normal'
What We Can Learn from Sports Analytics
More Webcasts
White Papers
SANS 2021 Cyber Threat Intelligence Survey
SANS Report: Measuring and Improving Cyber Defense Using the MITRE ATT&CK Framework
More White Papers
Reports
The State of Threat Detection and Response
2020: Threats in Review
More Reports

From my own personal point of view (and I am hardly a leading expert on this), I tend to think that Java isn't going anywhere for the next several years.

BUT: It has huge security issues -- and other tools and languages stand to eventually replace it.  Eventually.
Reply  |  Post Message  |  Messages List  |  Start a Board

I don't doubt you're right.  Everybody sues everybody in the Valley all the time.  Even when two companies strategically partnered in a joint venture may be suing each other about something else.  It's just a way of life.

Not to mention that these legal costs are part of a company's budget and are passed on to us consumers.
Reply  |  Post Message  |  Messages List  |  Start a Board

Indeed, the past year or so we've been very focused on getting Flash out of the enterprise and off of our computers.  We need to turn to Java next.
Reply  |  Post Message  |  Messages List  |  Start a Board

I'm sure one factor (of many) contributing to not settling is the idea of not wanting to set a precedent for any Tom, Dick, or Harry who thinks they can get a nice payday from suing Google.
Reply  |  Post Message  |  Messages List  |  Start a Board


@mak63   Good point, I had not thought of the functionality lost, and the fact that the consumer will ultimately lose in the end.

@ Technocrati I must admit I do enjoy watching these two heavyweights fight it out. If not Java then what?
I don't really. Sometimes the consumers are the ones who end up losing. For instance, when we lose some features in our smartphones.

If I'm not mistaken, the ability to search for an app from the app screen (at least in Android 4.4) is gone due of a lawsuit.
Reply  |  Post Message  |  Messages List  |  Start a Board

Thank you for your comment. I do have question, if Google settles, would that send the wrong message?

As the article mentions, "it's unlikely Google will give Oracle that kind of leverage over Android unless it has no other options."

So while I do agree with you, what I don't know is this is the path Google would like to follow or not? And if not, then would Google be able to approach this from another angle?
Reply  |  Post Message  |  Messages List  |  Start a Board

"....Java is on the decline and is actually going to be obsolete soon."