An early prototype of Smart Reply, which uses machine learning to generate email auto-responses, had a tendency to say "I love you." The company's engineers tamed its neural network to make it less fawning and more useful for writing coherent replies to incoming Gmail messages.

When Google's researchers tried to build a machine learning system to suggest possible replies to incoming email messages, they found that the neural network they had created, Smart Reply, had a tendency to respond too effusively.

As Greg Corrado, senior research scientist at Google described it in a post on the company's research blog, an early prototype of Smart Reply had a tendency to respond to nearly any inquiry with "I love you."

That's preferable to "I'm sorry, Dave. I'm afraid I can't do that." But it fell short of Google's goals.

"As adorable as this sounds, it wasn't really what we were hoping for," said Corrado.

[How will we connect tomorrow? Read 8 Smart Cities: A Peek at Our Connected Future.]

Corrado and his colleagues had trained their machine learning system using common email responses. Smart Reply was simply picking up on the human tendency to express affection. Because responses like Thanks, Sounds good, and I love you were so common in the training sample, Smart Reply tended to favor them when another response wasn't obvious.

With further refinement, Google's system learned to keep its emotions in check and to offer more appropriate replies.

Smart Reply didn't always deserve its name. Beyond its tendency toward adoration, it lacked common sense. When it identified an appropriate response to an incoming message, like a meeting request, it would suggest semantically similar answers, such as How about tomorrow?, Wanna get together tomorrow?, and I suggest we meet tomorrow. 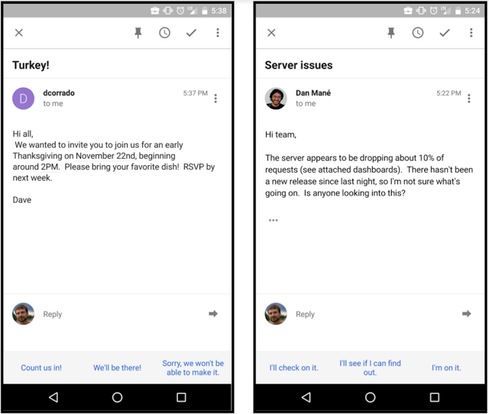 Henry Ford's manufacturing strategy for the Model T was similar: You can have any color you like, as long as it's black. But in the era of mass customization, machine learning can do better. To provide the user with a greater range of valid choices, Google research scientist Sujith Ravi and his team helped the system understand the meaning of its replies, in order to ensure there was sufficient differentiation between them.

The resulting service, Smart Reply, will debut in the Inbox by Gmail mobile apps for Android and iOS (but not the Web app), later this week. Inbox arrived in October 2014 as an attempt to rethink the email interface. It differs from traditional email clients primarily in the way it groups messages: It organizes email messages into related bundles, instead of storing them individually in reverse chronological order, and it highlights important information.

Inbox users will be able to employ Smart Reply to automatically generate up to three responses to incoming messages, when Smart Reply has enough confidence to make suggestions. The user can then tap the most appropriate machine-generated response instead of typing text on his or her mobile device, a chore few seem to enjoy. Canned email responses can accomplish the same thing, but only when the user has anticipated the full spectrum of possible responses.

Smart Reply may not be perfect, but it should improve over time by learning which responses users choose. According to Corrado, the system has been designed to respect user privacy. Like Gmail advertising, Smart Reply relies on email content to generate responses. But the data it uses to learn isn't available to Google.

Thomas Claburn has been writing about business and technology since 1996, for publications such as New Architect, PC Computing, InformationWeek, Salon, Wired, and Ziff Davis Smart Business. Before that, he worked in film and television, having earned a not particularly useful ... View Full Bio
We welcome your comments on this topic on our social media channels, or [contact us directly] with questions about the site.
Comment  |
Email This  |
Print  |
RSS
More Insights
Webcasts
Strategies for Success with Digital Transformation
Making Cybersecurity Work in Small and Medium-Sized Businesses
More Webcasts
White Papers
How to Prioritize Risk Across the Cyberattack Surface
All In, Online Gaming & Gambling
More White Papers
Reports
2020: Threats in Review
Are Unprotected Cloud Databases Leaking Your Data?
More Reports

Tried it today! Was able to send some replies for meetings with a few taps. I still prefer Yesware for Gmail templates on desktop and KeyReply team keyboard for my iOS device across all apps.
Reply  |  Post Message  |  Messages List  |  Start a Board
Editors' Choice
Hot Topics

10 IT Trends to Watch for in 2021 Cynthia Harvey, Freelance Journalist, InformationWeek,  12/22/2020
White Papers
How to Prioritize Risk Across the Cyberattack Surface
The Insecure State of Microsoft Teams Security
From MFA to Zero Trust
Two-Factor Evaluation Guide
All In, Online Gaming & Gambling